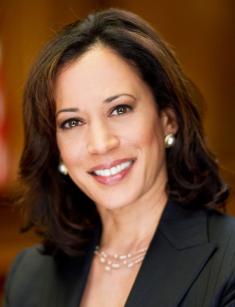 Kamala Devi Harris is an outstanding American lawyer. In 2017 Harris started working as Californian Senator. At the beginning of 2019, she made public announcement she would take part in the elections for a seat of the US president in 2020 what evoked a heated dispute in Social Networks. But why does Kamala Harris gain so much attention? Let us know right now!

Kamala Devi Harris' birthplace is California, the United States. Her mom, a Tamil Indian named Shyamala, worked as a scientist - she studied causes of cancer and its healing. Her dad, Donald Harris from Jamaica, was also a professor.

As a kid, Kamala spent much time with her granddad - a diplomat from India. He transmitted his love for politics and knowledge to the granddaughter. Alongside her sister Maya, Kamala was an often guest of a local temple while growing up.

At the age of 7, Harris had to get through her parents' break-up. Her mother got custody of both the children. Later the woman alongside the daughters left for Montreal, Québec, Canada.

Besides, Kamala Harris elaborated the Environmental Justice Unit while working and blamed numerous firms for pollution, such as Alameda Publishing Corporation and U-Haul. She also supported strict politics when it came to the environment. Besides, she prosecuted crimes against LGBT kids and teens. By the way, Harris supports same-sex marriage.

In 2003, she beat her opposer Terence Hallinan and became the San Francisco Attorney. Remarkably, Kamala Harris opened the list of South-Asian and black women who have worked on this position. In 2007 Harris became a winner of the elections again. Serving there, Harris launched a program allowing people connected with drug trafficking to get a high school education and find other occupations.

In 2009 the woman published her book entitled 'Smart on Crime: A Career Prosecutor's Plan to Make Us Safer.' There she shared her views about criminal justice.

Harris succeeded to win the election and became the first woman of Jamaican-American ethnicity and the first Californian Indian-American attorney general. 2014 was marked by her re-election.

Continuing to speak about Harris' contribution to politics, the woman elaborated the California Homeowner's Bill of Rights offering those who own a home more "choices while fighting to keep their home." The project banned "dual-tracking" and also gave the authorities more power to investigate financial frauds.

In 2012, Harris tried to communicate with about 100 developers of mobile-app in order to ask them to follow the California law in terms of privacy rights. Also, according to the woman, if any creator’s app does not show a privacy policy statement at the moment of the installation, they may get a $2500 fine for every download.

Woman’s net worth is evaluated at $2 million.

In 2016, Kamala Harris competed in the elections for a place in the Senate. There she won Loretta Sanchez, having got 62 percent of the vote.

In July 2017, Harris supported the Countering America's Adversaries Through Sanctions Act that grouped together sanctions against Iran, Russia, and North Korea.

While a January 2018 hearing, Harris had a conflict with Homeland Security Secretary Kirstjen Nielsen.

In February 2018, the politician signed a letter arguing against Donald Trump's legal authority to commence an anticipatory strike against North Korea.

In May 2018, when Trump announced the USA would leave the Joint Comprehensive Plan of Action, Harris questioned the decision.

Kamala Harris has announced she would take part in 2020 presidential election as a Democrat. As of July 2018, she spent more on Facebook advertising than any other candidate.

Near 20,000 people became witnesses of her formal campaign launch event at Frank Ogawa Plaza in her home city of Oakland, California on January 27.

Harris's support and approval rating rose after the debate. The woman hired Juan Rodriguez as her campaign manager.

Some of Harris’ competitors are Joe Biden and Pete Buttigieg. Also, she has received an endorsement from Ted Lieu.

Kamala Harris met her current spouse Douglas Emhoff in 2003 – one of their friends arranged a blind date for them.

The two married six months later after getting engaged. For Harris, it is the first marriage, for her husband - the second. Both spouses were 49 years old at the time.

Kamala's sister, Maya Harris, is a teacher like her parents. She taught at the University of San Francisco School of Law, the New College of California School of Law and the Lincoln Law School of San Jose. When she was 29, Maya opened the list of the youngest law school deans in the nation when she got the position of dean of the Lincoln Law School of San Jose. Harris also became involved in activism and has always been concerned about social problems, like her father.

In April 2017, as a response to the Khan Shaykhun attack, the President of Syria, Bashar al-Assad was blamed by Harris for assaulting Syrian kids. The woman publicly named him a brutal dictator who attacked his own people and a war criminal who should not have been ignored by other nations.

In her career, Kamala Harris has been an active participant of the elaboration of the Medicare for All bill, the Climate Risk Disclosure Act and the Marijuana Justice Act.

Harris is an active supporter of LGBT communities, of same-sex marriages and transgender surgeries.

Besides, she supports the idea of increasing money spent on health care in a country.

As for guns, Harris is actively involved in gun control. She has earned an ‘F’ rating from the National Rifle Association. After the 2017 Las Vegas shooting, the woman called the authorities for stricter gun control. She criticized other politicians for only giving condolences to families of people who died because of the shooting and not taking measures.

At the beginning of her career, Harris was against the legalization of recreational marijuana. However, later she changed her mind.

As for education, the woman thinks that parents of truants are criminals. She is convinced truancy at an early age is able to lead kids to committing crimes as adults.

Harris is against a decision that a person’s race is a reason for not being allowed to enter a university.