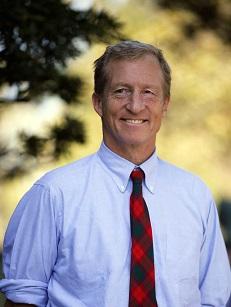 Tom Steyer is an American billionaire hedge fund manager and banker. In his life, he has launched several successful companies which keep working nowadays. It’s high time to get acquainted with the world of business alongside Tom Steyer!

Tom Steyer was born in Manhattan, New York on June 27, 1957, to the family of Marnie (née Fahr) and Roy Henry Steyer. The latter worked as a lawyer (and even partnered with the New York-based law firm Sullivan & Cromwell), while his mother was an educator teaching remedial reading at the Brooklyn House of Detention.

Having graduated from school, Steyer enrolled at Yale University in 1975 to study economics and political science. Later he entered Stanford Business School and received his Master of Business Administration (MBA).

Having graduated from Yale University, Steyer started working at Morgan Stanley in 1979 – it was his first experience in the commercial banking sector. Steyer served there until 1981. After finishing his studies at Stanford Business School, Tom was hired as an associate in the risk arbitrage division of Goldman Sachs. He worked there from 1983 to 1985, majorly involved in mergers and acquisitions.

Tom Steyer got the offer to be a member of the Executive Committee at the San Francisco based private equity firm, Hellman & Friedman. He worked there until 1986. Shortly after he founded Farallon Capital Management and set up its headquarters in San Francisco. In 25 years, the company became one of the largest and the most successful in the industry. So, in 2011, its market value was evaluated at $21 billion. Nowadays, the organization has a second office in the US, New York. Moreover, they expanded its operations abroad – the offices were opened in Singapore, Hong Kong, Tokyo, and London.

In 2007 Steyer established OneCalifornia Bank and OneCalifornia Foundation with $22.5 million as capital. The firm is the source of the funds which are used to do the charitable and educational activities supporting the bank's purposes. The bank supports the ideas of putting a stop to financial discrimination, promoting affordable housing, etc.

In August 2010 Steyer's organization was merged with ShoreBank Pacific, a Washington-based community bank. Following this, the firm was renamed as Beneficial State Bank.

In October 2012, Tom Steyer left his position at Farallon Capital to start working on an ardent advocate for clean energy career.

Apart from being involved in the world of business, Tom Steyer has dedicated himself to the cinema. So, he has served as a producer of the 2009 drama La Mission, starring Benjamin Bratt and Alex Hernandez. Also, he produced on the documentary films Becoming Bulletproof (2014) and Dolores (2017) and co-produced the documentary TV series Years of Living Dangerously (2016).

Steyer’s net worth is evaluated at $1.6 billion. He has managed to create a reliable financial platform for his wife and children.

Tom Steyer started his philanthropic works in 2006 – alongside his wife, he established OneRoof – a business initiative aiming to introduce technology to rural India. Besides, the spouses launched the TomKat Ranch in Pescadero, California, near Half Moon Bay. There scientists research and demonstrate sustainable ways of farming. In 2001, Steyer joined the board of Next Generation, a non-profit initiative focused on solving various children's and environmental issues and went on to establish NextGen America.

Steyer started his initiative for policies that would encourage income equality, Fair Shake Commission on Income Inequality and Middle Class Opportunity, in August 2015.

Tom Steyer has always supported leftist ideas, progressive political views. Since the 1980s, he is a supporter of the Democratic Party. 1983 was marked by Steyer's serving on Walter Mondale's presidential campaign.

During the 2008 Democratic Party presidential primaries, he originally supported Hillary Clinton but later became Barack Obama's supporter. After his victory, Tom was considered as the potential Secretary of Treasury and in 2013, as the possible Energy Secretary.

He worked with former Secretary of State and Republican George Shultz as co-chairs of the No on Prop. 23 campaign. Although he invested $5 million, the campaign lost.

In 2017, Tom Stayer invested $10 million in a campaign aimed to impeach the current US President, Donald Trump. It evoked new gossips about Steyer's running for office.

Recently it became known Steyer would run for President of the United States. On July 9, 2019 he confirmed his running for president in a video and said would soon take part in a debate and arrange pre-election events. Besides, he accused Donald Trump Jr., Jeffrey Epstein, and Flint, Michigan for unwise politics.

Bernie Sanders and George Soros don’t support his decision to take part in the elections.

In 2008 Steyer alongside his wife invested $41 million in creating the TomKat Center for Sustainable Energy at Stanford University which is focused on the development of affordable renewable energy technologies, and promotion of public policies to make renewable energy more accessible. As part of the project, lighter, less toxic, and more durable batteries were created.

In 2015 he became involved in Bill Gates' Breakthrough Energy Coalition.

In October 2017, while communicating with journalists, Tom Steyer said he supported the idea of raising personal taxes.

Tom Steyer has a wife - Kathryn "Kat" Ann Taylor. They tied the knot in August 1986. She is a Harvard graduate with J.D./M.B.A from Stanford.

Several years ago, the couple got through difficult times and people even thought they would end in divorce. However, the two continue being together.

Tom Steyer is a very religious person, a member of the Episcopal Church. In an interview, he once mentioned his concern for the environment grew alongside his Christian faith.