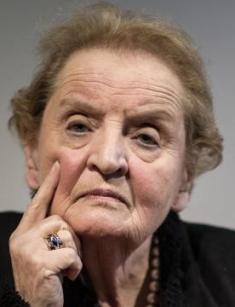 Madeleine Albright is the first female United States Secretary of State in U.S. history. She is one of the most influential American diplomats of the 90s.

Madeleine Albright (Korbel) was born in Prague on May 15, 1937. She is of Jewish ancestry. Her father was a Czech diplomat in Belgrade. In March 1937, after the Nazi occupation of Czechoslovakia, the family fled to England. Her grandparents stayed in the city and died in the Holocaust. After the war, the Korbel family returned to Czechoslovakia.

In 1948, Josef Korbel was appointed as Czechoslovakian Ambassador to Yugoslavia, and then to the UN. Madeleine is fluent in the Czech, English, French languages due to the business trips of the father. When the Communist Party of Czechoslovakia took over the government in 1948, the family immigrated to the United States. At the age of 20, Madeleine became a naturalized U.S. citizen.

Madeleine studied at the Kent Denver School (the most prestigious school for girls in Colorado) on a full scholarship. In 1955 she was admitted to five universities and chose Wellesley College, an institution that offered Madeleine the highest scholarship. She graduated with honors. Then the woman attended Johns Hopkins University and Columbia University.

At that time, Madeleine dreamed of becoming a journalist. She even worked for the student newspaper of Wellesley College, becoming an assistant news editor during her final year.

After graduation, Albright began to work for Encyclopædia Britannica. In 1967 she earned an M.A., writing her Master's thesis on the Soviet diplomatic corps.

Madeleine Albright began her political career with a fundraising campaign for Senator Edmund Muskie, who decided to run for president in the United States in 1972. In 1975, the senator invited Madeleine Albright to the position as his chief legislative assistant. Madeleine distinguished herself with sociability and friendliness.

As a Democratic Party activist, in 1984 she became a foreign policy advisor, working with Vice-Presidential candidate Geraldine Ferraro when Walter Mondale ran for president. After that, she headed the Center for National Policy, which was created to strengthen the Democratic Party. At that time, Albright managed to broaden contacts and in 1988 became a foreign policy advisor, briefing Presidential candidate Michael Dukakis.

During the presidential debate of Dukakis and his adversary George W. Bush in Washington, Madeleine Albright met Bill Clinton, the then-governor of Arkansas. In 1989, she advised Clinton to join the Council on Foreign Relations (an influential U.S. non-governmental organization), which Clinton did not forget. After becoming president, he appointed Madeleine Albright U.S. Permanent Representative to the U.N.

While working at the U.N. as the United States representative, she played a key role when Poland, Hungary, and the Czech Republic joined NATO. She is known for her involvement in the use of force during the conflict in the Balkans. Many people blame her for the mass killing of Serbs in Kosovo and call her the "executioner of Serbia."

"He is smart, but a truly evil man. A KGB officer, who wants to keep everything under control and believes that everyone conspires against Russia. It is not true. Putin had bad cards, but they were played well. At least, in the short-term. I think his goal is to undermine and split the E.U. He wants to drive NATO from his sphere of influence."

Articles about Madeleine Albright often include statements about the wealth of Siberia and the injustice of the exclusive possession of the land. Russian politicians often quote her statement about Siberia, although they have not determined whether the information is reliable or not.

Madeleine Albright was a member of observers to early elections of the President of Ukraine in 2014 of the National Democratic Institute. She has repeatedly met Yulia Tymoshenko.

In 2016, she actively supported Hillary Clinton during the U.S. presidential election.

Despite her short height (4.82 ft. (147 cm)) and a tendency to stoutness, young Madeleine always attracted the attention of men.

In June 1959, she married Joseph Medill Patterson Albright, a sun of the newspaper tycoon (his family owned the New York Daily News). She met him during an internship for The Denver Post in the summer of 1957. Shortly after the wedding, Madeleine gave birth to twin daughters, Anne and Alice. The children were born prematurely and needed lung ventilation. They were so small and weak that Madeleine at first was not even allowed to touch them.

In 1966, the woman became pregnant again. But this time, the pregnancy was much more difficult. Moreover, during the first trimester, Alice and Anne fell ill with measles. Despite an immune globulin injection, the baby was born dead. Madeleine could find comfort in 1967 when her youngest daughter Katherine was born.

Joseph was a reporter for the Chicago Sun-Times. He became famous in 1961 after publishing a report on the scandalous meeting of Richard Nixon with his supporters (Joseph hid in the hotel bathroom and recorded the conversation). In 1970, the couple sold all News Day shares for $ 37.5 million.

After 23 years of marriage, on January 31, 1983, the couple divorced. After the divorce, Madeleine got a three-storied house in Georgetown, a wealthy suburb of Washington, and a farm in Virginia, as well as a large part of his fortune.

However, the separation from her husband was not easy. One the one hand, it was rumored that the man left her for another woman, and he was always a ladies' man. But on the other hand, people thought that when his things went bad, Madeleine did not pay any attention to it, pursuing her career.

An interesting fact is her impressive collection of pins. In 2009-2010, she exhibited them at the Museum of Arts and Design in New York City. Most of them have no artistic or jewelry value, but attract people as a symbol of a new approach to diplomacy.

Madeleine Albright is naturally straightforward. But, as a diplomat, she could not always express her opinion, communicating with an opponent. Madeleine is a woman who came up with her diplomatic language, "brooch language."

She invented it by chance. As a U.S. permanent representative to the UN, Madeleine learned that she was called a snake in an Iraqi newspaper. She did not lose her head and came to the meeting of the U.N. Security Council wearing a snake pin on her left shoulder.

Her collection boasts brooches in the form of stinging insects or a crab (a negative sign); a snail symbolized sluggish negotiations, a turtle meant patience in negotiations, butterflies or balloons were used for a favorable situation. For example, the Secretary of State wore a brooch in the shape of the flag of America, meeting Kim Jong-il, the leader of North Korea, and a pin in the form of a zebra, which is the symbol of Africa, negotiating with Nelson Mandela. Albright had a white daisy brooch on her lapel during the talks with Primakov in 2006.

One of her favorite brooches (she wears it more often than others) is the Statue of Liberty head pin with two small clock eyes, one of which is upside down-allowing both her and her visitor to check the time.

However, there were misfortunes in her brooch diplomacy. According to the woman, her main mistake was a brooch in the form of monkeys ("no see, no hear, no say") at the meeting with Vladimir Putin. He asked her what these three monkeys meant. This jewelry was a reaction to Putin's policy in Chechnya. According to Albright, he was outraged then. Although Madeleine says that she would have worn the same jewelry to meet him even today.

In 2015, it became known that Madeleine Albright would play herself in the political series Madam Secretary. By the way, it is not her first role. So, in 2005, she already appeared in the teen series Gilmore Girls. In 2018, the politician played a cameo role in the film 12 Strong.

In 2017, the first female U.S. secretary of state celebrated her 80th birthday. Despite her age, Madeleine Albright continues to participate in the political life of the country and sharply criticizes the immigration policy of Donald Trump.

"I was raised Catholic, became Episcopalian & found out later my family was Jewish. I stand ready to register as Muslim in #solidarity," the politician wrote on Twitter.

Madeleine Albright has written several books during her political career. She has published a treatise on economics entitled "The Role of Religion in World Politics," and an autobiography, "Madam secretary: Memoirs of Madeleine Albright. "

In 2018, the woman published a book about fascism, Trump, and Putin, entitled "Fascism: A Warning." It immediately peaked at number two on the non-fiction best-sellers list. The woman looked great at the presentation of the book, which took place in early May. She was full of energy and had no health problems.

Madeleine Albright has a net worth of $10 million.