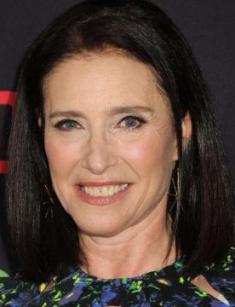 Mimi Rogers is an actress whose fame was brought by the movies Someone to Watch Over Me, Ginger Snaps, Lucky, and others. Tom Cruise's first wife, thanks to whom he learned about the Scientology direction, and a professional poker player, today Mimi tries herself as a producer and is rarely seen in the movies. Childhood and youth Mimi Rogers' real name is Miriam Spickler. She was born in the American state of Florida, in the provincial town of Coral Gables, on January 27, 1956. Her father worked as an engineer, and her mother was a former dancer. Miriam's family belonged to the Scientology movement, so the girl and her parents attended meetings of believers and kept them in their hearts.

Mimi didn't have any problems with her studies. By the time she was 14, Rogers had graduated from school as an external student and worked on an individual development plan. The girl liked the creativity. She felt a tendency to drama, so at leisure visited the amateur theater. Mimi was a community activist and volunteer in a hospital for incapacitated patients.

Her creative progress was interrupted by marriage with James Rogers at the age of 20. Her first husband was a Scientologist, and as a member of the organization, Mimi believed that she fulfilled her destiny by getting married. However, the family was not destined to exist for long. Four years later, young people got divorced.

After breaking up with her husband, Mimi decided to start a new life. The first step in her plan was to move to another city. Los Angeles turned out to be an ideal destination. Remembering the pleasure that brought classes in the creative club in her youth, Miriam decided to continue her acting career. She enrolled in the courses and within nine months, learned the basics of the profession. Then the young woman found the agent and began to wait for her starring role.

Luck doesn't always smile at creative people at once. Miriam was offered to participate in her debut projects when she was 26 years old. A novice actress immersed in the world of television, starring in episodic roles in various TV series. A significant event in her creative biography was the appointment to the lead role in the comedy called Blue Skies Again, released in 1983. Mimi's partner on the site became Harry Hamlin.

In the movie industry, Miriam was not so much in demand as on television. The first major TV project for her was the series Paper Dolls, in which the artist performed a leading role. It was followed by the famous project Tales from the Crypt, which was shooting from 1989 to 1996. The directors noticed Mimi's creative potential, and she often received cooperation invitations.

In 1991, director Michael Tolkin invited the actress to work on the project called The Rapture. The movie was released in the same year. The role that Mimi played there was partly close to her. Pictured as a religious fan, she received praise from critics and the public. In the same year, together with Rutger Hauer she starred in the movie Wedlock.

Mimi Rogers was proud of her attractive appearance when she was young and mature. Even now the height of the actress is 5'8'' (173 cm), and weight - 145 lbs (66 kg). Photographers of Playboy magazine captured her sharpened figure. Her photos appeared in the issue of men's magazine in 1993. Combining a career with maternal responsibilities during this period, Mimi paid more attention to the family than shooting.

In 1996, the actress appeared in the movie The Mirror Has Two Faces. This is a comedy telling the story of the beautiful transformation of the nutcracker into a beautiful woman. On the set, the artist worked with Barbra Streisand and Jeff Bridges. Trivial for today's plot in those years caused a wave of excitement among the public. The movie was received with particular sympathy not only in the U.S. but also abroad. Subsequently, the actress appeared in an episodic role in the movie Austin Powers: International Man of Mystery.

In 1998, Mimi Rogers received a role in the famous movie Lost in Space. After that, the actress's filmography was supplemented by work in the television project The X-Files. The last one made David Duchovny a famous star.

In 2004, Mimi appeared in The Door in the Floor, but by then her career was gradually declining. She understood this and accepted the course of events with humility. In an interview, the celebrity says that the creative path of an actor is full of unpleasant failures and random success, which is impossible to predict. Such a situation should be reconciled at the beginning of a career and accepted readily throughout their career. This approach would allow us to maintain emotional health.

Marrying James Roger at the age of 20 and divorcing him a few years later, Mimi clearly understood what awaited from a romantic relationship. Mimi's second husband was actor Tom Cruise. It was thanks to his wife that he learned about the movement of Scientology. Miriam dedicated the lover in the details of faith, which changed the life of Cruise, and shared them with friends of the actor. Three years later, the couple broke up. Among the reasons for their divorce was the absence of children. By that time, Nicole Kidman had appeared in Tom's life.

During this period, Mimi realized that she no longer wanted to follow the Scientology teachings on which she had been guided most of her life. Her main focus was on her professional development and work on her personal life. 2003 brought her happiness in the form of a marriage with producer Christopher Ciaffa. Before that, the couple had been in a civil union for several years, and Mimi had given birth to a daughter named Lucy in 1995 and a son, Charles, in 2001.

Mimi is less and less invited to the set today. She tries herself as a producer, however, does not have much success in this area. In addition to acting, Miriam is a poker fan and is now considered a professional player.

Now the actress does not support Scientologists. In 2019, she was more interested in public activities related to the protection of animals and the environment. Mimi is not active on social media. On Instagram and Twitter, there are accounts registered under her name, but it is difficult to speak about their authenticity, as they are not verified.