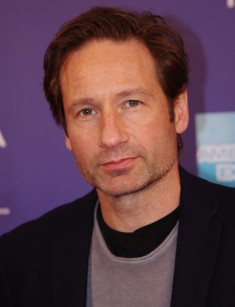 David Duchovny is a Hollywood actor who became world-famous due to his roles of the FBI Agent Fox Mulder in the TV series "The X-Files" and the writer Hank Moody in the television series "Californication". The actor awarded two Golden Globes due to his high professional level. In 2016 David received his personal star on the Hollywood Walk of Fame.

David Duchovny was born in New York on the 7th of August, 1960 in a large poor family. Margaret Duchovny, a mother of future celebrity, was a Scottish and worked as a teacher at the school. Amram Duchovny, David's father is a publicist. Amram has written several books including the autobiographical novel. It's known that David’s parents divorced 11 years after his birth.

David grew a closed and unsociable child, but a powerful mind of the young man had opened him the way to the prestigious New York school. Duchovny had been studying in this educational institution together with John Kennedy Jr. who had died in the aircraft crash in July of 1999.

After David Duchovny had finished the school he entered the Princeton University to study at the Pedagogical Faculty. The student himself earned money for his studies working as a keeper, a barman and also delivered products. Later, David got a master’s degree in English literature at Yale University and was planning to go for his Ph.D. Nevertheless some events which had taken place in his life forced the actor to change his decision.

While working on the thesis the future actor enrolled in the acting courses and as a result, acting became his peculiar hobby which influenced further creative biography of David Duchovny.

For the first time, Duchovny appeared on the TV screens in 1987, having acted in short commercials of Löwenbräu beer. At this time the movie actor decided to stop working on the thesis and completely shifted his focus on the dramatics. Thanks to his attractive and unusual appearance and also a mad desire to become an actor David managed to get to the world of cinematography.

A year after his debut in the movie "The Working Girl" the director David Lynch paid attention at the actor and made him an interesting offer – to play a role of the transvestite in the mystical series "Twin Peaks". David Duchovny accepted this offer.

After an episodic role in "Twin Peaks," a rising star of Hollywood received an invitation to the shootings of the series "Red Shoe Diaries" where he played the abandoned lover. This role is considered to be the initial stage in the actor's career.

The movie "Evolution" presented in 2001 was especially remembered to the audience. Such prominent representatives of the American movie industry as Julianne Moore, Orlando Jones, Seann William Scott and Dan Aykroyd participated in the shootings of the picture together with David Duchovny.

David gained popularity in 1993 with the beginning of the shootings of the series "The X-Files". This picture became a real hit on TV. Soon the name of the movie actor was tightly associated with the agent Fox Mulder who conducted investigations together with Dana Scully whose role was performed by Gillian Anderson. The audience and the experts of the movie industry called "The X-Files" the best work in the creative biography of the American actor. Later on, the American actor will mainly appear in TV series.

In 2007 the shootings of the series "Californication" had begun in which Duchovny played the major role of the writer who was facing the personal and creative crisis. During all the seasons the Hollywood actor had been completely absorbed by his work on these series. Being on the air during 7 years the movie had become a cult picture. In 2014 the audience saw the final 7th season of "Californication", but the actor hadn’t managed to take a break during the shootings.

In summer of 2015, David Duchovny and Gillian Anderson had been working on a new season of "The X-Files" which was premiered on the 24th of January, 2016. The new season of the series consists of 6 episodes.

Also the comedy-drama "The Joneses" was rather remarkable for the audience. In this movie, David Duchovny worked on the movie set together with the actress Demi Moore. The famous actors, directors, and workers of shooting stages' staff who had worked with David Duchovny noted that the actor behaved openly, seldom provoked disputes and gave 100% to achieve the best result.

In 2014 the American actor participated in the shootings of the commercials of the Russian beer "Siberian Crown". In the new video, David told that Russia had much to be proud of. More than once the actor mentioned in an interview to representatives of the press that he "always felt half Russian". Nevertheless, in April of 2014, David Duchovny changed his position. In the microblogging service of Twitter David published a tweet in which he called himself the Ukrainian: "I have grown up, thinking that I was Russian, but only now I have understood that I have always been a Ukrainian. It’s never late to change".

David Duchovny also devotes his time to the music. In 2015 there was released his first musical album under the title "Hell or Highwater".

The new disc consists of 12 tracks which were composed by David Duchovny. The first song is available to admirers in the format of the single.

David himself noted in the interview that his new album hadn’t become the embodiment of his dreams, and his work on the disc had been just the aspiration to express his own feelings to the listeners and to tell about the understanding of those feelings which are sometimes experienced by the person.

"Creation of the album is similar to the fulfillment of my dream though I have never had such dream. It is still difficult for me to believe that this has happened. But these songs are a real expression of my feelings that's why I was looking forward to the opportunities to share them with everybody" — admitted the actor in the interview to the "Rolling Stone" edition.

Tall and handsome (David is 1,84 cm high) actor has always been at the center of attention. Personal life of David Duchovny is actively discussed in Mass media. During a long time, the actor couldn't find a constant life partner as the actor didn't use to have monogamous relations. Having charming appearance the actor has never suffered from lack of female attention. He had affairs with the actresses Perry Reeves and Winona Ryder, but such relations hadn’t lasted for a long time.

In 1997 the world famous star, at last, found his only woman with which he decided to connect his life. David Duchovny married the actress Téa Leoni who gave birth to their daughter Madelaine West and their son Kyd Miller. After 11 years of marriage, David and Téa decided to separate after the actor had officially confessed that he suffered from hypersexuality. After the actor had undergone the treatment in the private clinic, he made up his mind to reunite with his family again. In 2009 spouses began to live together. However, in 2011 again there were disagreements in the family of Duchovny which destroyed their marriage. In 2014 the couple officially divorced.

More than once it was reported in the press about the love affair of Duchovny and his partner on the series "The X-Files" - Gillian Anderson. Fans of the TV series consider that the actors who had played agents Scully and Mulder not only meet with each other but also have secretly got married. Celebrities refuse to comment on such information even at present days.

The year 2016 became successful for the American movie actor. David Duchovny continued to take part in the shootings of movies and also began to work on a new musical album.

At the beginning of the year, David Duchovny received a star on the Hollywood Walk of Fame. At the ceremony, the American actor announced that he was going to return to the directing.

"I would direct a couple of movies before I give up smoking. The ideas I have had, stories which I have written – all this is rather for independent, low budget cinema. These are human stories, it is difficult to shoot them and to show them", – Duchovny told at the ceremony.

David’s friends and colleagues, including the creator of "The X-Files", a producer and a scriptwriter Chris Carter came to congratulate Duchovny.

In January of 2016 new episodes of the 10th season of the TV series "The X-Files" came out on the screen. The audience could see the characters of David Duchovny and Gillian Anderson again. The directors hadn’t rejected the idea of the previous seasons but decided to show the new storyline. Chris Carter mentioned that the fans of the series had seen absolutely different Mulder and Scully.

In December of 2016, the American actor began to work on the new disc. Duchovny published a photo from the recording studio with the corresponding comment on his page on Facebook.

In 2017 the audience saw Duchovny in the movie "Twin Peaks: The Return". The first two episodes of the popular American movie were presented at Cannes Film Festival.

Fans of the actor look forward to seeing his new photos on the Instagram network and also hope for the appearance of the new movies with the participation of their favorite actor. 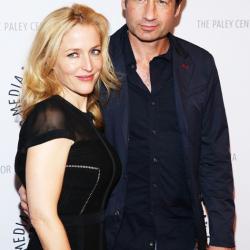