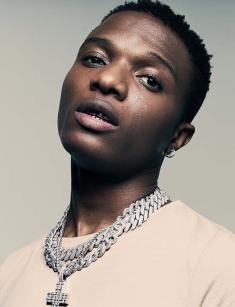 Wizkid is a Nigerian singer and songwriter of Yoruba ethnicity. His songs belong to the Afro-pop style.

The future celebrity was born on July 16, 1990, in Lagos as Ayodeji Ibrahim Balogun. His dad is a Muslim and has three wives. His mom is a Pentecostal Christian. Ayodeji has twelve sisters.

He tried to attend two universities but dropped out of them.

When this boy was growing up, his primary sources of musical inspiration were Bob Marley, Fela Kuti and King Sunny Adé. He went to a Christian church together with his mom and began to sing in its choir at the age of 11. Together with his church friends, he formed a band called the Glorious Five, which released one album.

Until 2006, this guy was trying to make a music career under his Lil Prinz alias. However, it was only in 2009 that he managed to attract the attention of a large audience. He recorded a hit called Fast Money with M. I. Abaga.

Since then, he has released 5 studio albums and around 30 singles. He has collaborated with such musicians as Burna Boy, Tiwa Savage, Davido and Buju as well as several A-list stars such as Beyonce, Akon and Drake.

The essence of most of his hits is very positive. He encourages his listeners to be happy and value what they have. The lyrics of his famous Blessed song can serve as a perfect example.

Wizkid has been giving concerts all over the world, including such top locations as Madison Square Garden or Atlanta. He set two Guinness World Records on Spotify: for the most streamed tune and the first track to reach one billion streams. Such huge brands as Pepsi and Guinness have endorsed him. He modeled for Dolce & Gabbana.

Wizkid has a unique fashion style. He mixes traditional Nigerian clothes with modern streetwear items. He's planning to launch his own clothing line. One of his key fashion icons is Pharrell Williams.

As for controversies, the star gets regularly involved in feuds with his colleagues on Twitter.

Ayodeji has never been officially married. He has kids from three mothers: Oluwanishola Ogudu in 2011, Binta Diamond Diallo in 2016 and Jada Pollock in 2017 and 2022. Besides, he used to date Tania Omotayo.

He met Jada in 2012. In three years, she became his manager. She's the head of a consulting business firm. She helped many well-known football players with their branding.

Some of the most prominent awards that this artist won were launched by the following brands:

Besides, he was nominated for these awards: