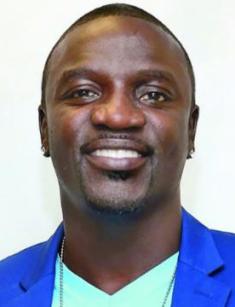 Akon is an American hip-hop musician, producer, and songwriter. He has often been nominated for various awards including two Best R&B/Soul Singer and collaborated with many celebrities: Snoop Dogg, David Guetta, Bob Sinclar, Gwen Stefani, and others.

Aliaune Damala Badara Akon Thiam was born in St. Louis, Missouri, on April 16, 1973. Right after the boy was born, the family came back to their home country, Senegal. His father, Mor Thiam, was a percussionist, and his mother, Kine Gueye Thiam, worked as a dancer. The boy took an interest in music early and dreamed of following in his dad’s footsteps; Akon learned how to play the drums, the guitar, and the traditional West African instrument djembe.

When the child was seven, the family returned to the United States and settled in New Jersey. Young Akon was fluent in three languages: English, French, and Wolof. At the age of 15, he created his first song, “Operations of Nature”.

The teenager had legal issues: he hijacked vehicles and sold drugs; it led him to prison for five years. Fortunately, the man reflected on his life and decided to change; he felt determined to devote his life to music.

Still in prison, Akon wrote the song “Locked Up”. Overall, he created many hits at that period. As soon as the young man was released, he recorded several rap tracks about his life.

Initially, Akon worked in his home studio. Soon, Universal noticed the young talent and helped him release his debuting album, Trouble. The musician created all the songs on his own and shared his emotions about the past; fans remember his hits “Ghetto” and “Belly Dancer (Bananza)” from this album.

By the way, “Belly Dancer” had already been released in 2003 as a single but did not grab people’s attention. However, when Trouble came out, all radio channels began to broadcast it. Although the album did not reach the first position in music charts, it spent there much time. The sales were also good, and the album became platinum.

November 2006 was marked with the second album, Konvicted; it was called the release of the year. The artist collaborated with Eminem, Snoop Dogg, T-Pain, and Styles P. The album earned the platinum status within seven weeks; it was so popular that Akon launched his own music label, Konvikt Muzik, and clothes line, Konvict Clothing. Not only the USA but also Europe, Russia, and Africa loved the singer. Besides, the man announced he was going to create a movie about his life.

In 2008, Akon recorded the next work, Freedom. The duet song with Michael Jackson, “Cry Out Of Joy”, was supposed to be included there, but the track leaked to the Internet before the album release, so the musicians did not add it there. Later, the song came to Michael Jackson’s postmortem album. Just like the previous collections, Freedom was platinum.

In 2009, Akon tried himself as a producer; Flipsyde’s State of Survival came out under his supervision. Besides, the composer co-created Lady Gaga’s hit “Just Dance”; the song was nominated for the Grammy Award for Best Dance Recording.

In May 2009, FIFA offered Akon to create the anthem of the championship and become the music manager of the event. The singer was flattered and immediately agreed. He wrote the song “Oh Africa”; the American singer Keri Hilson recorded it. Besides, the bright music video on the soccer theme was released. The earnings were donated to help deprivileged African children.

In 2010, the artist announced the upcoming album Stadium that was never released. Still, Akon recorded many duets and singles.

The same year, the Indian actor Shah Rukh Khan offered the musician to create the soundtracks for the movie Ra.One. The composer created two tracks in Hindi, “Chammak Challo” and “Criminal” and did not take any money, although the work was pretty challenging.

Akon is interested in cinematography. In 2012, worked on Black November; three years later, he played in the crime drama American Heist. Overall, the musician filmed more than 40 music videos including the hits “Lonely”, “Right Now”, and “Smack That”.

Akon is Muslim; he never takes alcohol or drugs. Rumors had it the musician had three wives, but he denied the speculations: it was only a joke for journalists. In fact, the man has only one wife; they are probably not married. Akon has six children from three women, none of which was his official spouse.

The artist often fools with the media. For example, the singer’s date of birth remained unknown for a long time. When Akon was asked about his age, he only smiled and said he did not know it; the musician did not understand why it was so important. He looked young and did not see the point to share the information. However, The Smoking Gun published the official police documents that revealed the celebrity’s birthday: April 16, 1973.

Akon keeps secret his personal life and girlfriends’ and children’s names. He rarely posts family pictures on Instagram; one can see a few photos with his eldest son when the boy celebrated his birthday.

In 2007, Akon purchased a diamond mine in South Africa; however, he did not give any information about its exploitation. In 2014, the singer set up the Akon Lighting Africa project to provide 600 million African people with electricity.

2017 was marked with collaboration with popular DJs: the song “Yes” with the Dutch musician Sam Feldt and “Til the Sun Rise Up” with the French Bob Sinclar.

2018 brought the songs “Unsterblichkeit” with Bushido.