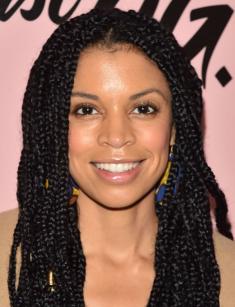 The Brooklyn native, Susan Kelechi Watson, started her acting career in the early 2000s. Since then, Scott's credits have included several TV series like Third Watch, Kidnapped, NCIS, plus starring roles on Louie, The Blacklist, The Following, and This Is Us. In 2019 Susan tried herself as a movie actress, participating in drama movie A Beautiful Day in the Neighborhood. In 2019 Watson announced her engagement. Her net worth is roughly estimated at $5 million, including all of her properties and earnings.

The birthplace of Susan was Brooklyn. She was born to her parents on November 11, 1981. The girl started interesting in acting from an early age. And her aspirations to become an actress began when she was just three years old. Susan’s childhood was rather difficult for her. She faced a lot of deaths of people close to her. As a child, Susan lost her aunt, godmother, great-grandmother, cousin, and even friend, which was like her twin.

Susan was talented in acting and got a scholarship to study the program in England. She was invited to study Shakespeare at the University of Oxford. However, the program’s price was very high, and Susan needed financial assistance. As the novice actress was in a financial crisis during her school days, she had to refuse to participate in the program.

Susan stayed in the USA, and entered Howard University in Washington, D.C. There she learned to be fierce and not accept “no” for an answer. Graduated from HBCU and received her Bachelor’s degree in Fine Arts, Watson attended NYU Tisch School of the Arts. Soon she earned a Master’s degree in the same field.

Before her graduation from NYU in 2003, Watson went on to star in several Broadway and Off-Broadway productions, including 2005’s A Naked Girl on the Appian Way, Richard Greenberg's old-fashioned boulevard comedy in pseudo-provocative clothing.

Watson started her movie career from a short appearance on CBS’s crime drama Hack. The same year she was invited to play Andrea Davis on Fox’s TV series The Jury. Susan quickly found success in that field and moved to another gigantic network NBC to play Emma St. Claire in 12 episodes of TV series Third Watch. She was starring with Michael Beach, Bobby Cannavale, Josh Stewart and others. After several short appearances in 2005 – 2007, Susan was set as a supporting cast member to Law & Order, Kidnapped, and NCIS.

Watson made her real breakthrough in 2012 when the episodes of FX’s comedy-drama TV series Louie with the actress’s participation were released. Louie was loosely based on comedian Louis C.K.'s life, showing segments of him doing his stand-up routine on stage, and depicting his life offstage as a divorced father of two girls.

Watson played comedian’s ex-wife and mother of his two children on season 3. When Susan went to audition, she didn’t know much about the role. She just knew she was going in for the role of Janet. As the actress had seen the series before she auditioned, Watson knew the kids on the show. At the audition, the actress said she didn’t know what part she was auditioning for. Susan knew it couldn’t be Louie’s wife because his kids were white.

The crew did not pay attention to her remark and just press record. Watson got the role, and she believed that she wouldn’t play his ex-wife, maybe his friend, but not the ex-wife. But the creator and director Louis C.K. turned to be a kind of brilliant for casting it that way. Despite leaving viewers guessing about the back-story of the relationships, the race issue had never been fully explained on the show — and that was intentional.

"We auditioned people who were African-American and white, we auditioned both," explained the show’s cast-director. "We didn’t limit ourselves to someone who was just Caucasian. Louis just felt that the woman who we cast (Watson) was best for the part, and she happened to be African-American, and he didn’t care about that. He didn’t feel like he had to explain that in any way and have two Caucasian children and an African-American wife."

Watson left Louie in 2014 after the release of season 4. Appeared on Royal Pains, The Blacklist, The Following, Blue Bloods, Veep, and Limitless, in 2016, Susan got her main career’s role, Beth Pearson, on NBC’s This Is Us. The series followed the lives and families of two parents and their three children in several different time frames. Susan played a wife of Randall Pearson, portrayed by Sterling K. Brown, and mother of Tess (Eris Baker) and Annie (Faithe Herman).

The other cast members were Milo Ventimiglia (as Jack Pearson), Mandy Moore (as Rebecca Pearson), Justin Hartley (as Kevin Pearson), and others. This Is Us brought the world's eyes upon Watson and brought her fame to another level. The actress transformed a solid supporting character into one so beloved that rumors of her impending death led fans to start Save Beth Pearson petitions.

In February 2019, Episode 13 of season 3 was released. It told the fans the dance story of their favorite Susan Watson through her character Beth, who demonstrated her abilities as a ballerina on the dance floor. The sequence was both empowering and surprising since many had never seen Beth's skills in action. Therefore the question arose if those moves were via a body double or Watson could dance.

Soon after the episode’s release, Watson gave an interview, in which she opened about her dancing past. She reported that dance was very important to her in her childhood because it was a way of expression without speaking. It turned out that she was a diverse dancer and studied ballet, modern, tap, jazz, Brazilian, Caribbean, and African dance. Similar to Beth, Susan had talent from birth.

Unlike her character's commitment to ballet, Watson revealed that she didn't continue with that path beyond the age of 12 or 13. That topic was briefly broached in the episode with the teen version of her character, but instead of giving up, Beth stuck to her passion until her father's death. Moreover, the episode's title was a reference to Beth's Jamaican heritage, as well as her father Abe's (Carl Lumbly) nickname for his youngest daughter. Watson was, in many ways, the "little island girl, who danced before she walked."

As of the end of 2019, This Is Us had four released seasons and was waiting for three additional seasons. The casting team won several awards for the great work in the project in 2016 – 2019. Susan was awarded as Outstanding Supporting Actress in Drama Series in 2018 and 2019. In 2017 she appeared on one of such ceremonies with a head full of braids with a bun at the top. Her look became a trend among her fans.

In 2019 Susan Watson got her first movie role in Marielle Heller’s A Beautiful Day in the Neighborhood. The actress landed a role opposite two-time Oscar winner Tom Hanks and Matthew Rhys. The movie was inspired by a real-life friendship between Rogers (Hanks) and the award-winning journalist Lloyd Vogel (Rhys).

In the heart-warming story, a cynical journalist begrudgingly accepted an assignment to write a profile piece on the beloved icon and found his perspective on life transformed. Watson portrayed Andrea Vogel, a public attorney, Lloyd's wife, and a fan of Rogers' show. The actress, herself a fan of Mister Rogers' Neighborhood, described her character as a "career woman" who faced unique challenges of patience and adaptation as the mother of a newborn.

In 2019 it turned out that Susan was secretly dating another star from the industry, Jaime Lincoln Smith. The Grand Theft Auto V actor was amidst an aspiring career in the business. Unlike many other celebrity couples, Susan and Jamie were extremely private about their dating life. Not single news appeared about their love story. Moreover, the couple appeared together at the 2019 Tribeca Film Festival, sharing the red carpet together.

Only on September 7, 2019, Susan announced through her Instagram about her engagement, posting a photo of a massive diamond sparkler engagement ring. The jewelry piece her fiancé had offered was a bright baby blue shade that featured smaller white diamonds in a classic round shape.

Susan was not new to being a wife and had garnered enough experience of it with Sterling K. Brown. But it was something that people saw in the TV series where they portrayed husband and wife. It was time to get married in real life.