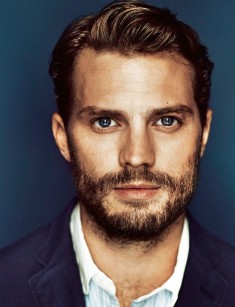 Jamie Dornan is an Irish actor, musician, and model who has managed to make a great career both in the fashion world and in the movie industry. He has gained popularity as the face of such huge advertising campaigns of the world fashion industry giants as Calvin Klein, Boss, Dior, and Armani. In cinematography, the young man became famous for his roles in the picture Marie Antoinette by Sofia Coppola and Fifty Shades of Grey directed by Sam Taylor-Johnson.

The talented actor Jamie Dornan was born in May 1982 in the Northern Ireland, in the city of Belfast. There were no actors or any artistic people in Dornan's family. Jamie's father was a practicing birth attendant. When the young was sixteen years old, he became half-orphaned - his mother unexpectedly died from pancreatic cancer.

Jamie Dornan received education at the Methodist College Belfast in his town. Already being a teenager, the guy demonstrated a particular interest in acting and participated actively in the drama club. At the same time, Dornan got fancy for music, and together with his friend David Alexander they founded a musical band Sons of Jim. The young boys lacked experience as well as they needed financial support. Therefore the group was not to last long and did not bring aspiring musicians the desired success in the music industry.

Upon the graduation of the college, Jamie Dornan entered the local university. During his studies, he has got an unexpected job offer from the well-known Select Model Management agency. Without any hesitation, Dornan moved to London, where he started his successful modeling and acting career.

The young man has become well-known and demanded in the model business in a very short time. His colleagues consider Jamie Dornan to be a kind of "lighthouse" in the harsh world of the fashion industry. They believe that Jamie can guide the beginning male models.

In spite of the fact, Dornan became one of the most famous persons in the fashion industry from his first photo shoots, though he still had a desire to try his hand in the acting industry. It was Keira Knightley, who helped him to make his dreams come true. They began to meet each other at that time. In 2005, Knightley offered the candidacy of Jamie to her agent for the supporting role in the movie Marie Antoinette. The agent accepted his candidacy, though the young man wasn’t known in the cinematography. Until that, he didn’t appear on the TV screen, even in episodes.

In the historical drama, Marie Antoinette directed by Sofia Coppola the beginning actor performed in tandem with Kirsten Dunst, who got the leading role.

This way Jamie Dornan began his cinematic biography. The debutant has demonstrated his outstanding talent. His brilliant acting in the movie and his first role have brought him extreme popularity. The remarkable directors paid attention to the talented acting of the Irish actor. Thanks to that already in 2007 Jamie Dornan received a leading role in drama Turn the River. In 2009, the gifted actor performed two prominent roles in the popular films - the British drama Shadows in the Sun and melodrama Nice to Meet You.

The year 2011 has brought the rising Hollywood star a remarkable role, which strengthened his positions as a star. Jamie Dornan has received an invitation to take part in the first season of the popular series Once Upon a Time. In 2013, the Irish actor played a serial killer in the British high-rate series The Fall, where he appeared together with Gillian Anderson. For his excellent work in this fighter, Jamie Dornan received the National Prize of Ireland in the nomination for Best TV Actor.

By the beginning of 2014, nobody questioned the acting skills of Dornan. Many remarkable directors wanted to get this grey-eyed handsome young man, a favorite of the female audience. The directors invited Jami to play more and more significant roles in exciting projects. In his assets, the actor has many prestigious awards including the Broadcasting Press Guild Awards and the Rising Star prize. A considerable army of Jamie Dornan's admirers was looking forward to seeing his new films.

Even though it was somewhat challenging to get this triumphant role in the bestseller movie, Jamie Dornan, and Dakota Johnson became the significant characters in the picture Fifty Shades of Grey. This movie became the most significant hit in the biographies of both actors. It turned out to be the most famous and high-grossing movie in their career.

Jamie Dornan and Dakota Johnson were aware of the fact that such well-known and sensational project could become for them a kind of the stepping stone into the world of big cinematography. Though, in the case of failure, this movie could have become the last point in their career. That’s why the actors wholly dedicated themselves to work and perfectly turned into their characters.

Though transformation into a billionaire and great businessman with non-standard inclinations from the bestseller written by E. L. James brought Jamie Dornan world popularity, the movie critics met this film with restraint. As it turned out later, the actor wasn't delighted with this work. In one of his interviews, he confessed that he wasn't pleased with the "discovery of non-standard sexual behavior," but "it appeared to be very useful for my work."

The release of the sequels of Fifty Shades of Grey is set for 2017 and 2018. The working titles of the new films with the participation of Jamie Dornan and Dakota Johnson are the following - Fifty Shades Darker and Fifty Shades Freed. The actor will again perform the role of billionaire Grey. Nobody knows whether the Irish actor has a desire to continue to shoot in this scandalous project, which brought him and his family many unpleasant moments, but under the terms of the contract, he is obliged to do this.

Before Jamie Dornan got married his personal life had been the excellent source of news for paparazzi and tabloids. The handsome man and ladies’ man provided input for discussions and rumors: he had endless love affairs and flings.

Jamie’s love affair with Keira Knightley was one of the most last-lasting relations before his marriage. It was this Hollywood star who has given the actor a ticket to the world of cinematography. They had serious relations, and Dornan had rather definite intentions: it seemed they were about to get married. But because of the journalists who were following and pursuing the couple everywhere, two celebrities broke up. Even at present, they speak warmly about each other.

After separation from Keira, Jamie Dornan had short love affairs with many famous beautiful girls. His girlfriends’ list includes Lindsay Lohan, Sienna Miller, and Kate Moss. These are only those who are well known all over the world. It can take a long time to list some less popular girls.

Jamie had put an end to the love affairs with the stars when he met the love of his life – a singer and actress Amelia Warner, Colin Farrell’s ex-wife. Jamie Dornan has created a family with this woman. They married in April 2013.

In a short time after the wedding, Jamie Dornan and Amelia Warner became happy parents. Amelia gave birth to their daughter, Dulcie. And in February of 2016, their second daughter Elva was born. 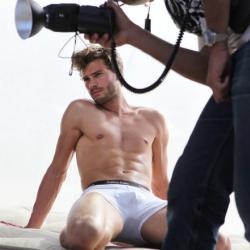