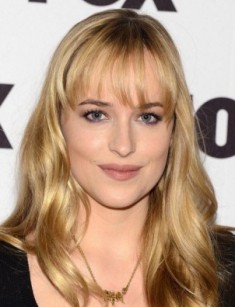 Dakota Mayi Johnson, more familiar to us as Dakota Johnson is an American actress and a gorgeous model who has gained her glory and popularity due to her leading roles in the movie hits "Ben and Kate" and "Fifty Shades of Grey".

The biography of Dakota Johnson is closely connected with Hollywood. The girl is a third-generation actress. She was born in October 1989 in Texas in the family of the famous Hollywood actors Melanie Griffith and Don Johnson – the "detective Nash Bridges". Her grandmother Tippi Hedren was a popular actress too and also she was one of the main muses of Alfred Hitchcock and a model in her past. Her grandfather Peter Griffith was not a less famous actor too. Dakota has multinational blood flowing in her veins – Norwegian, English, Swedish and German.

In 1996 after the divorce of her parents and the third marriage of her mother, Dakota’s stepfather Antonio Banderas was engaged in the education of the girl. He became a really close person for her and also her patron. Except for Dakota in their family, there were two uterine children – her brother Alexander and her sister Stella.

The future actress got a prestigious education at Aspen Community School. Since her school years, the girl was fond of choreography and, as well as the major part of "star" children, she was interested in model business.

At the age of 12 Dakota Johnson for the first time posed as a model for the "Teen Vogue" elite magazine after what she began to think seriously about the model career. For the successful realization in the severe world of the fashion industry, the beginning model had the appropriate look: gorgeous appearance, expressive features, slim figure, excellent taste and faultless style. This indisputable best asset promised her great success in the model business.

In 2006 young Dakota Johnson signed the contract with the popular "IMG Models" model agency. And in 2009-2010 the spectacular model became the face of "MANGO" advertising campaign and began to cooperate with the Australian fashion-label company "Wish".

The bohemian lifestyle and her modeling didn’t prevent Dakota Johnson from trying herself on the shooting stage. The girl inherited invaluable acting talent, the ability of embodiment and charisma from her numerous relatives who managed to break through to the top of Hollywood.

Dakota Johnson began her acting biography with the supporting role in the movie "Crazy in Alabama" which was released in 1999. The movie turned out to become a "family movie", as her mother and younger sister Stella Banderas also took part in it. And her stepfather – Antonio Banderas became the producer of this cinematic masterpiece.

The picture was met warmly by the spectators and got flattering reviews from the movie critics. But Dakota Johnson didn’t become popular after its release.

For the next ten years, Dakota Johnson practically didn't appear on the TV screens. She returned to the cinematography in 2010 only. She played a role in the sensational movie about Facebook "The Social Network" together with the actor Justin Timberlake.

The movie with the Hollywood favorite Timberlake brought recognition to Dakota Johnson. But she managed to taste the glory only two years later, in 2012 when she performed in the leading role in the movie "Ben and Kate". This is a comedy series directed by Dana Fox which was broadcast on the Fox channel since September 2012 till January 2013.

After this brilliant work, the actress acted in the satirical pseudo-documentary movie "The Office", which tells about the life of the office workers in touching and ridiculous manner. This tape received a number of prestigious awards, including the Golden Globe and Emmie Awards.

During this period of time, Dakota Johnson enriched her filmography with a couple of more successful projects. The short-length movie "All That Glitters", the melodrama "Beastly" and the comedy "Goats" were the brightest of them. In the last project which was shot by Christopher Neil, the girl had worked with such Hollywood stars as David Duchovny, Vera Farmiga, and Graham Phillips.

The comedies "21 Jump Street" with Channing Tatum and "The Five-Year Engagement", the drama "Cymbeline" and the adventure movie "Need for Speed" in which Dakota Johnson had got noticeable roles turned out to be less remarkable but nevertheless successful.

The actress became more popular. Soon she appeared to be among the idols of youth. The "Nylon Magazine" edition called Dakota Johnson one of the fifty-five persons of the future.

But the project which would bring to the young actress extreme international recognition was waiting for her ahead. In 2013 the star was approved for the leading female role of the screen version of the sensational novel of E.L. James "Fifty Shades of Grey". Johnson successfully passed the audition for the role of the student Anasteisha Steele.

However, it wasn't without a scandal. The admirers of the best-seller weren’t satisfied with the choice of the main character. They considered that Dakota wasn't so attractive and young to transform into Anasteisha. They even wrote a petition in which they demanded to carry out one more audition. More than twenty thousand people had signed this petition.

By the words of Dakota, the necessity to be naked for some juicy scenes was not a problem for her: to the delight of directors and producers, Johnson had no sense of shame.

Jamie Dornan and Dakota Johnson were at the peak of their popularity after the premiere of "Fifty Shades of Grey". For some time they became the most discussed actors of Hollywood.

The same year there were released three more new movies with the participation of Dakota Johnson. They appeared to be less remarkable because of the sensational "Shades", but, nevertheless, were called successful. These are the pictures "Chloe and Theo", "A Bigger Splash" and "Black Mass".

In 2010 the future Hollywood star began to meet the popular guitarist Noah Gersh. This gorgeous couple had been together for four years. It is remarkable that the girl has never had a reputation of a versatile person. Most of her friends and colleagues assure that Dakota prefers long-lasting relations.

In 2014 the actor Jordan Masterson became Dakota’s boyfriend. But the approval of the actress for the movie "Fifty Shades of Grey" destroyed Johnson’s private life. The couple began to have conflicts and quarrels. It is said, that Jordan was not satisfied that his beloved woman would act in bed scenes. The guy visits Scientology church and he is rather scrupulous in the questions of morality. Later, Masterson and Johnson separated.

But the beauty had not been single for a long time. She began to meet the lead singer of the "Drowners" indie-rock band - Matthew Hitt. But the scandalous glory which had fallen upon Dakota after the release of "Fifty Shades of Grey" was too destructive for the couple’s relationship. Hitt couldn't bear unprecedented attention and such a rush around his girlfriend. So, the couple broke up.

Imagine the surprise of the journalists when they again "caught" the couple together. It is said that their "break-up" was not true. It’s just that after the picture had been released the public was waiting that the screen love affair with Jamie Dornan would proceed in life. Therefore, the producers asked the actress to keep her relations with Matthew Hitt quiet: let the public think that Johnson meets Dornan.

But there also exists another version. It is said that Matthew Hitt had really left his girlfriend. He found it difficult to make up with the fact that according to the terms of the contract Dakota Johnson had to act in two sequels of "Fifty Shades of Grey". New parts of the movie were released in 2017.

In 2015, right after whether an imaginary or real separation with Hitt the star has again appeared in the top news. Paparazzi took a photo of her together with the extravagant model Cara Delevingne who had recently admitted her bisexuality. The couple visited Karl Lagerfeld's party which he organized on the yacht. The girls were in the excellent mood and were holding hands tightly. Their photos appeared in all tabloids. But the girls didn’t give any reasons to talk about them again and were not noticed together anymore.

Today the actress isn't married. It seems, that the movie "Fifty Shades of Grey" hadn't brought happiness in private life to Dakota Johnson. Perhaps, the sequels will make her happy. 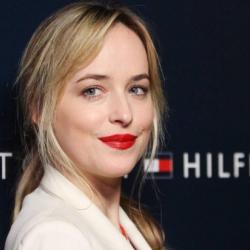