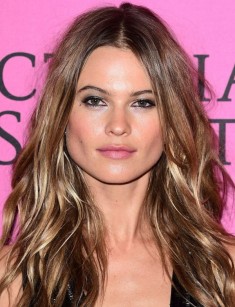 Behati Prinsloo is a supermodel from Namibia, famous for being one of a Victoria's Secret Angel.

The model was born and raised in Namibia, although Behati is not African by nationality. The girl's father, Boet Prinsloo, worked as a church minister. Her mother, Magda, run a cheap bed and breakfast.

Behati studied both the local dialect and English at school. But at the same time, Prinsloo was a tomboy and could not calm down even in the church. When the parishioners told her to be more quiet, Behati cried that this was her father's church, and she could do whatever she wanted.

When Behati was a teenager, she loved sports: gymnastics, athletics, and even field hockey. The girl didn’t become a professional athlete, but it helped her to form a beautiful body.

When the girl was 15, she went to Cape Town, South Africa with her grandmother. During their trip, the famous scout and the director of the modeling agency Sarah Doukas noticed Behati. This woman once opened Kate Moss to the world of the modeling business. Behati was invited to the photo shooting. Firstly, she didn’t like this proposal, primarily because she expected a negative reaction from her father.

But Boet, on the contrary, supported this idea. The model's father confessed many years later that he realized that this was the only way to give the daughter the opportunity to see the world. So Prinsloo signed a contract with a modeling agency and a few months later she participated in the photo shoot in London.

For her modeling career, Behati Prinsloo advertised the products such famous brands as Chanel, Versace, Lacoste, Christian Dior, Dolce & Gabbana and others. Since 2007, Behati works with Victoria's Secret and appears at the Victoria's Secret Fashion Show. And two years later Prinsloo signed a personal agreement with this company and along with Adriana Lima becomes one of its "angels," as they call the top models that show new collections.

In the same year 2009, Behati Prinsloo got to the top 100 most attractive models of the world. The girl appears in this rating every year, gradually improving her position. According to the latest data, Behati takes the 12th place.

In 2012, Behati Prinsloo became the face of the Seafolly swimsuits brand.

In 2015, the supermodel became the "angel," which opened the traditional annual show of Victoria's Secret Fashion Show. Behati went to the podium in a pink lingerie set and peach gown. The stars and bright red letters LOVE were installed on the wings behind the model.

A young woman claims that she does not have any beauty secrets. Prinsloo drinks a lot of water every day, sleeps a lot and never sunbathes without sunscreen. That’s it.

When Behati Prinsloo was 16 years old, the girl met and began dating the British model Jamie Strachan. Their relations lasted seven years, but then the couple broke up. Jamie found a new girlfriend, the actress Dakota Fanning. Behati met a musician and singer, the soloist of "Maroon 5", Adam Levine. This relationship was stormy and bright, and the love story of the stars was full of both romantic moments and scandals.

Prinsloo even broke off the relationship with her lover, but later the young people made up. On July 19, 2014, the couple got married.

The ceremony took place in Mexico, and three hundred guests were invited to the party, including such world-famous stars as Robert Downey Jr. and John Hill. In spring 2016, Behati announced that she would soon become a mother. The model did not hide the pregnancy and posted photos with a rounded belly on the "Instagram" and other social networks.

In September 2016, Behati Prinsloo gave birth to a daughter. To support his wife in this happy but difficult period, Adam Levine even canceled the concert in Connecticut on September 19, two days before the birth of his daughter.

For some time there were no details about the birth of the child. In September, the public knew only that both Behati and the baby feel well. But soon a touching photo with a child appeared on the supermodel's page, and fans again had the opportunity to learn more about the life of Behati. The girl was named Dusty Rose Levine.

When the girl was four months old, the star parents appeared with their daughter for the first time.

The supermodel from Namibia today lives in Los Angeles. She has friendly relations with other representatives of her profession - Candice Swanepoel and Lily Aldridge.

In everyday life, the model prefers street and casual styles. The young woman likes golf. And although Behati began to play this aristocratic sport only recently, Prinsloo already achieved excellent results and was admitted to the golf club.

In 2017, Behati and Adam bought a house with an area of 856 square meters in the prestigious area of Holmby Hills. The couple hoped that in such a large house with five bedrooms, six bathrooms, a swimming pool and a large terrace, they will live comfortably. But it turned out that the luxurious mansion requires too many renovations. And the stars did not have time and energy for that. So Behati and Adam never moved into the new house, and five months after the purchase they sold this property. The spouses got $ 18 million in cash.

In autumn 2017, the supermodel announced her pregnancy. Behati posted a personal photo on the Internet, leaving no doubt that she was telling the truth. After that, most interviews with the spouses were devoted to talking about family plans. On Ellen DeGeneres show, Adam Levine said that they already know the sex of the future child - the star couple will have a second daughter.

Also, the musician said that he wanted a lot of children and that he feels great in the chaos created by children. But also Adam noted that Behati wants a big family more. The musician suggested that because she grew up as the only child in the family, now the woman wants 100 children. Adam admitted that he was not sure if he was ready to bring up such a large family.

In February 2018, Behati Prinsloo became a mother for the second time. The girl was named Gio Grace Levine. Already a week after the birth of the girl, the parents shared with the fans the first photos of the baby. The fans of the model and the musician were happy and left positive comments and wishes for the health of the child.

And a week later the model posted a video in a swimsuit on the "Instagram," which showed that the model has a perfect body even after the pregnancy. Journalists noted that Victoria’s Secret angels have always been famous for miraculous transformations. The fans noticed that Behati had not yet come to her previous forms (weight 56 kg with a height of 180 cm). But everyone admired such fast and impressive results. Behati Prinsloo told that it is impossible to have a good body without active training and a special diet. 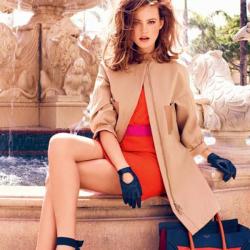