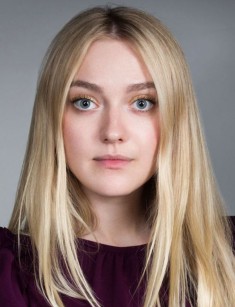 Dakota FanningDakota Fanning is the young American actress who became the youngest member of the Academy of Motion Picture Arts and Sciences and the youngest Screen Actors Guild Award nominee. The actress is known for her roles in the popular Hollywood movies “I Am Sam,” “War of Worlds,” “Man on Fire,” “Charlotte’s Web,” and last parts of the “Twilight Saga.”

Hannah Dakota Fanning was born in town Conyers, Georgia. The girl’s father Steven Fanning used to be a professional baseball player and played for St. Louis Cardinals. After he finished his sports career, the man began to sell electronic equipment. The mother Heather Joy was a professional tennis player. Other relatives were also involved in sports: the grandfather Rick Arrington was a famous quarterback in Philadelphia Eagles that played in the National Football League, and the aunt Jill Arrington (the mother’s sister) was an ESPN reporter. Only Dakota and her younger sister Elle Fanning chose the movie career.

Dakota spent her childhood in Los Angeles where she went to Campbell school and was a cheerleader for the school football team. The family moved to this city due to the elder daughter: her career began when she was a small girl. She went to the acting club since 4, and a theater agent offered her a job two years later.

The little actress appeared on the TV screen in the Tide ad. Several other ads and minor episodes in series (“ER,” “C.S.I.: Crime Scene Investigation,” “The Practice,” and “Spin City”) followed. Besides, Dakota had more significant roles in the children’s movies “Ally McBeal” and “The Ellen Show.”

The 7-year-old actress had her first important role in the movie “I Am Sam” where she played Lucy Diamond Dawson, the little daughter of a mentally challenged person. The famous actor Sean Penn was her stage partner. Fanning won the Broadcast Film Critics Association Award as the best young performer and was nominated for Screen Actors Guild’s Special Achievement Award for Outstanding New Talent – she became the youngest nominee.

The next year, Dakota had the leading kid role in Steven Spielberg’s TV series “Taken” where she played Allie Keys; she also played the main character’s child version in “Sweet Home Alabama” and one of the main roles in the movie “Hansel and Gretel.” One year later, her voice appeared in some episodes of “Family Guy,” “Justice League Unlimited,” and other cartoons.

Later on, the 10-year-old actress starred in several famous movies: “Man on Fire,” “Hide and Seek,” “Nine Lives,” “Dreamer,” “War of the Worlds,” and “Charlotte’s Web.” Fanning collaborated with many stars of the world cinematography, and all of them appreciated the small actress’s talent. In 2006, when the girl was only 12, she became the youngest member of the Academy of Motion Picture Arts and Sciences.

In 2007, the fantasy thriller “Push” came out; Dakota played a watcher who stood against the criminal organization. Two years later, the actress starred in this project again.

Dakota Fanning played another character possessing superpowers in the following movies of the “Twilight Saga”: in 2009, 2010, and 2012, the actress had a secondary role of the vampire Jane and collaborated with Kristen Stewart and Robert Pattinson. Dakota appeared in the last episodes of the movie series: “New Moon,” “Eclipse,” and “Breaking Dawn – Part 2.”

In 2011, the actress had a time-out in her movie career: she wanted to graduate from school without extra pressure. In the next year, she came back and appeared in the melodrama “Very Good Girls” with Elizabeth Olsen and the movie “If I Stay.” Soon, the new movie, the biographical drama “Effie Gray” was released. Dakota Fanning played the major role of Euphemia Gray who married the famous 19-century English writer John Ruskin and remained virgin in the first five years of the marriage.

Dakota Fanning avoids talking about her personal life and prefers to have her professional skills discussed. There is very little information about the actress’s short-term love affairs. Fanning’s only serious relationship began in 2013: Dakota met 32-year-old Jamie Strachan who was a model and spokesperson for many brands, such as Gucci, Calvin Klein, H&M, Hugo Boss, and Michael Kors. Since that time, the young people have been dating.

Apart from the successful acting career, Dakota is engaged in the world of fashion. She has signed an agreement with IGM models where she is listed as “Dakota F.” The actress does not have the classic model parameters: her height is 163 cm., and her weight is 54 kg. which makes the young woman too short and curvy for the common image of a podium model. Still, it does not prevent her from working with the famous agency.

Dakota is fond of handcraft; she often knits scarfs for her stage colleagues.

Sometimes, people confuse the young actress and her colleague Amanda Seyfried. Dakota does not express her discontent and continues to work on her unique style. The young woman has her own Instagram account with 1,5 million followers. The actress posts promo pictures of the future movies, selfies, childhood photos, and party pictures.

In September 2016, the premiere of the crime drama “American Pastoral” starring Dakota Fanning took place in Toronto International Festival. The movie is based on the novel of the recognized classic of the American literature Philip Roth. The movie is set in the 1960s in the USA. Fanning plays the teenage girl Meredith who participates in the anti-war protest when the US Army invades Vietnam. Meredith blows up a gas station and has to hide.

At the Venice Film Festival, another movie with Dakota Fanning was presented. The actress played the young woman Liz in the French and Dutch mystic western “Brimstone.” The story is set in the superstitious 19th century. Liz tries to escape her own dark past and revengeful, mystical preacher (Guy Pearce). The movie premiere took place at the beginning of 2017.

2017 was marked with the premiere of the drama with comedy elements “Please Stand By” where the actress played the main character Wendy. The movie tells the story of the autistic woman who tries to take part in the writing competition and thus runs away from her caregiver.

In 2016-2017, two movies with Dakota Fanning were made: “The Bell Jar” directed by the actress Kirsten Dunst and “The Postcard Killings.”

In 2018, the actress will appear in the crime movie “Ocean’s 8” which is the famous movie “Ocean's Eleven” spin off. 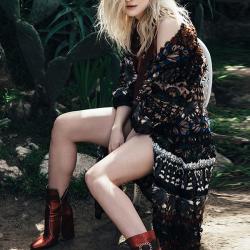