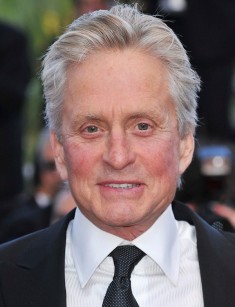 Michael Douglas is an American actor and producer, winner of two Oscar awards. The actor became popular after such films as "Basic Instinct", "Wall Street", "A Perfect Murder", "Enough" and the television series "The Streets of San Francisco." As a producer, Douglas became famous after the Oscar-winning drama "One Flew Over the Cuckoo's Nest".

On September 25, 1944, the son of Kirk and Diana Douglas was born. He was called Michael. The boy showed his hot temper in childhood.

At the age of fourteen, Michael was expelled from school, because was thinking only about girls and not studies. The boy behaved not very well. Michael Douglas was a typical representative of the "golden youth": he joined the hippies, visited bars.

Parents sent the guy to the military school. By the time, his mother and father broke up. Michael wanted to follow in his father’s footsteps and to become a famous actor. So he refused to enter Yale University and chose the faculty of dramatic art at the University of California. In high school, Douglas met Danny DeVito. They became friends. Danny DeVito became not only Michael’s friend but also a work partner.

Kirk Douglas believed that his son should begin his acting career at 25 years. And until this time, it was important to build a strong character. Michael worked as an assistant of a director and assistant of an editor.

The creative biography of the actor began in 1972. Michael Douglas made his debut as an inspector Stone in the series "The Streets of San Francisco." Three years later, Douglas became the producer of the film "One Flew Over the Cuckoo's Nest". The success of the film was stunning - it received five "Oscars".

In 1979, the film "The China Syndrome" was released, in which Michael Douglas played one of the main roles and was a producer. In this film, the actor expressed his own opinion on the issue of nuclear disarmament, which was discussed for a long time.

In 1980, Douglas got a serious injury and stopped his career for some time. During this time, the audience forgot him but Michael felt the mood and tastes of people and knew what to offer to the audience. In 1984, he starred in the adventure film "Romancing the Stone". Then there was a sequel "The Jewel of the Nile", in which he played the main role.

An important step towards the image of a "cool guy" was the role of the choreographer Zak in the film "A Chorus Line". Michael Douglas's father always wanted his son played a bad guy and was right. The role of stockbroker Gordon Gekko in the movie "Wall Street" not only made Douglas Jr. famous but also brought him "Oscar" and "Golden Globe".

In the image of a "cool guy", the actor appeared in the films "Down by Love", "Basic Instinct", "Black Rain". These roles brought him the status of a Hollywood superstar. The film "Basic Instinct", in which Douglas played along with Sharon Stone, collected 112 million dollars.

In 1993, the actor played the role opposite to the usual role of a cool guy. In the thriller "Enough", Douglas played an average citizen who can’t stand the injustice of the world, takes a baseball bat, ruins stores and paves the way for his daughter’s birthday.

The most respectable role of the actor is the image of the American president in the film with the same name. But critics agree that Michael Douglas better plays roles in which the hero's character requires an ambiguous reaction. They call such works as "The Game" and "Traffic" successful.

Douglas played a negative character in one more popular film "A Perfect Murder". The actor played the main role of the jealous and imperious Stephen Taylor. After learning about the betrayals of his young wife, he asks her lover to kill the unfaithful wife.

The new millennium brought the actor a number of memorable leading roles. In 2000, Michael Douglas played the role of a university professor who faced problems both in his personal life and in writing a book, in the tragicomedy "Wonder Boys." For the role of the teacher, Douglas received the "Sputnik" award in the nomination "Best Actor, Comedy / Musical".

In 2001, the actor appeared in the role of psychiatrist Nathan Conrad in the crime drama "Don't Say a Word," based on the novel by Andrew Klavan. Michael Douglas played the role of a brilliant doctor. His colleagues invited him to consult other doctors about the treatment of a non-talking girl Elizabeth. For Conrad, this case looks trivial until the psychiatrist finds out that the life of his own daughter Nathan depends on Elizabeth's words.

In 2003, the actor again returned to the role of a cool guy and played a secret agent of the CIA in the comic thriller "The In-Laws". The agent Steve Tobias tries to come to his son's wedding and gets into adventures of his in-law, the quiet orthopedist Jerry, whose role was played by Albert Brooks.

In the same year, the actor played the main role in the drama "It Runs in the Family", which tells about problems in the house of a successful businessman.

In 2006, the actor played a special agent again. In the thriller "The Sentinel" Michael Douglas played the patriot, Pete Garrison. The special agent suspected that there is a double agent among his colleagues. But he did not solve this problem because Pete was already accused of a crime and a double game. Garrison was forced to hide as well as to look for a traitor to save the life of the president.

In 2007, Douglas played in the popular tragicomedy "King of California ". The actor plays the role of a crazy bass player who gets released from an insane asylum and with his daughter gets into adventures.

In 2009, the actor played the role in the detective drama “Beyond a Reasonable Doubt", a remake of the film of 1956. In the same year, Michael Douglas played the role of an elderly businessman, who lost everything in the melodrama "Solitary Man".

In 2010, the actor returned to the role of a merchant and former robber Gordon Gekko in the continuation of the financial drama "Wall Street: Money Never Sleeps." In the new film, Gekko finds a student, whose role is played by Shia LaBeouf. He has a new brilliant plan during the global financial crisis.

In 2013, the actor played the role of the famous pianist Valentino Liberace in the biographical drama "Behind the Candelabra". In the same year, the actor appeared in the comedy "Last Vegas", which tells about the party of old friends in Las Vegas. The main roles in the film also played Robert De Niro, Morgan Freeman and Kevin Kline.

In 2014, the actor played in the melodrama "And So It Goes", which shows how the life of the old egoist changes with the appearance of a granddaughter. Also in 2014, Douglas appeared in the role of millionaire Madec in the thriller "Beyond the Reach." During the hunt, Madec accidentally killed a man. His assistant wants to call the police. It makes the two men the worst enemies who started fighting for their own lives.

In 2015, the actor joined "Marvel", playing the role of Hank Pym in the comic blockbuster "Ant-Man".

In 1971, Michael fell in love with the actress Brenda Vaccaro, whom he met on the set of the film "Summertree". Their relationship lasted almost 6 years.

In the spring of 1977, Michael Douglas married Diandra Luker, who is 13 years younger than him. She was the daughter of an Austrian diplomat and had nothing to do with the film industry. A year later their son Cameron was born. Their marriage lasted 23 years, but in 2000 the couple divorced. Divorce proceedings lasted almost two years - Douglas paid Luker 45 million dollars in compensation.

After the divorce, the actor had short relations. And at the premiere of the film "The Mask of Zorro", he met the actress Catherine Zeta-Jones. The elderly Michael Douglas fell in love with her immediately and in every possible way tried to invite her on a date. In December 1999, the couple announced their engagement, and four months later they got married. Catherine gave birth to their two children.

In 2010, Douglas was diagnosed with laryngeal cancer. Almost a year he was treated. According to the actor, he recovered. But his wife could not stand the test - since 2011, Catherine suffers from bipolar disorder. Since the spring of 2013, Catherine Zeta-Jones and Michael Douglas did not appear in public together. In August of the same year, the actor said that he was going to file for divorce because of the "global depression of his wife." But three months later the couple was together again.

In the spring of 2017, the actor appeared in the action movie "Unlocked".

In 2018, the sequel to the comic film "Ant-Man and the Wasp" is planned, in which Michael Douglas will again appear as the inventor Hank Pym.

Today, three more projects have been announced, in which Michael Douglas starred. The actor will play the main role of Dr. Amandus Rosenbach in the American-German drama "Head Full of Honey". Douglas and Til Schweiger are the producers of the film.

Also, the actor will play the main role in the drama about the school memories "The God Four" and will play the role of Ronald Reagan in the biographical film "Reykjavik" dedicated to the Reagan-Gorbachev meeting and the beginning of the nuclear disarmament of the two superpowers: the USSR and the USA.