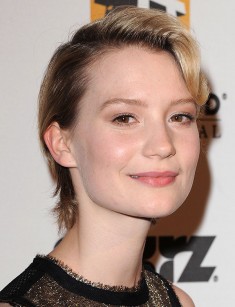 Mia Wasikowska is an Australian movie actress and director who became internationally famous after the fantasy movie “Alice in Wonderland” was out. Besides, the movie hits “Only Lovers Left Alive,” “Jane Eyre,” and “Crimson Peak” are among Mia’s works.

Mia was born in the capital of Australia – Canberra. In the would-be actress family, there are also an elder sister and a younger brother. The girl’s parent worked as professional photographers. The mother Marzena Wasikowska is of the Polish origin, and the father John Reid is a native Australian. 8 years after Mia was born, the family moved to Poland, the mother’s homeland, for a year to wait for the official permission to receive a permanent Australian visa.

By the way, there have been a lot of arguments regarding the actress’s surname. The English-speaking persons pronounce it as [wazikovska], the Russians are used to saying [wasikovska], and Mia insists that the right option is [waʃikofska].

After the family returned to Australia, the girl went to a ballet studio where she was practicing for almost seven years. Mia dreamed of going to the stage, so every day, she would go to the ballet bar and work for up to 35 hours per week. Besides, she had to go to regular school.

Wasikowska did not become a ballet dancer, but when she was 15, she was offered to play in a movie. Having accepted the offer, Mia changed her life dramatically.

For the first time, the 15-year old Mia appeared in the crime drama “Suburban Mayhem.” Later on, other Australian movies followed: the series about the medics “All Saints,” the teenage drama “September,” the horror movie “Rogue,” and others. The young actress attracted attention overseas, and the next scenarios were received from Hollywood which influenced Mia’s biography. The girl started working with her personal manager.

Mia played in the series about psychoanalysis “In Treatment,” the psychological drama “That Evening Sun,” melodrama “Amelia,” the comedy “The Kids are All Right.” By that moment, the young Australian had worked with the stars – Richard Gere and Daniel Craig.

In 2010, as long as the unique adaptation of the legendary tale “Alice in Wonderland” by Tim Burton was out, Mia Wasikowska turned into the international star. The actress reminisces that she often had to play with the imaginary partners represented by pieces of cardboard. This detail of the work helped the actress develop her imagination. The tale was an instant success, and six years later, the sequel – “Alice Through the Looking Glass” – followed.

After the work on the project was finished, Mia cut her long hair and donated it to the Foundation of Children with Cancer. The actress’s hair was used to create wigs for little patients. Having her hair cut, Mia felt an ordinary person; the actress does not hide that her fame is difficult for her. With short hair, the girl became less noticeable which made it easier for Mia to go outside.

Despite the world’s acknowledgment, Mia Wasikowska remains a simple girl who feels a little out of place at red carpet movie festivals. Each time, Mia is worried to fall accidentally and twist an ankle. Another problem is about a makeup which can be spoiled in the spotlight.

During the breaks between the movies, Mia had time to work on the melodrama “Jane Eyre.” Mia read the book in 2009 and immediately called her agent to know if the adaptation was being prepared. The girl was lucky: in six months, she signed an agreement with BBC films that started working on Charlotte Brontë’s novel. Michael Fassbender, Jamie Bell, and Judi Dench also starred in the movie. The work won the Academy Award for Best Costume Design.

Later on, the actress’s filmography was complemented with the thriller “Stoker,” the vampire story “Only Lovers Left Alive,” the adventure movie “Tracks.” Mia became so in-demand that directors involved her in at least four projects per year.

In 2013, Mia played the girlfriend of the loser Simon, the main character, in the thriller “The Double.” Simon’s life was gradually transferred to his double James, the successful manager. In a year, Mia worked on the comedy “Maps to the Stars” where she played a young adventuress dreaming of conquering Hollywood. With this in mind, the girl got acquainted with the aging star Havana Segrand and broke into her house under the unbelievable excuse. The premiere took place in Cannes.

Among the latest movies, the mystical thriller “Crimson Peak,” the comedy “Maps to the Stars,” and the classic novel adaptation “Madame Bovary” are the most popular works.

Few fans know that Mia is fond of scriptwriting and directing. In 2013, the young woman took part in creating the movie almanac “The Turning” created in Australia. In the actress’s homeland, the movie was nominated for many national awards. Three years later, Mia had the similar experience with the movie novella in the international almanac “Madly.”

Mia Wasikowska’s personal life is not as open as that of her colleagues. The girl keeps the majority of her romantic relationships in secret from fans and omnipresent journalists. It is known that Mia was dating the actor Jesse Eisenberg whom she had met at the thriller “The Double” shooting. Since 2015, the young couple broke up.

It is probable that the parents’ profession somehow has made an impact on Mia on the genetic level because Wasikowska likes taking pictures. She is also fond of reading and hiking. The girl got used to traveling since the early childhood: the little Mia visited many European counties together with her parents; she has been to Russia where Marzena Wasikowska had an exhibition.

It is interesting that as long as Mia became famous, the Polish government suggested the actress take the second citizenship – the Polish one, since she met all the requirements. However, Wasikowska rejected the offer without explaining the reasons.

Wasikowska has no Instagram account to upload photos for fans. However, there is the official group in the social network Vkontakte; the Russian Mia Wasikowska fan page is also present on Twitter.

Mia Wasikowska is not interested in the number of roles – she selects the material thoroughly. In 2017, the actress appeared in the popular international project – the biographical thriller “The Man with the Iron Heart” in which she played Anna Novak, the lover of Jan Kubiš (Jack O'Connell), who was a Czech resistance fighter. The movie is based on the story about the Czech diversionists who condemned the attempt on the Fascist German leader and the Jewish problem administrator Reinhard Heydrich’s life (Jason Clark).

The actress starred in the American thriller “Piercing” and played Penelope in the comedy western “Damsel.” 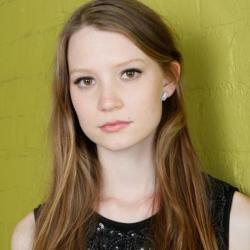