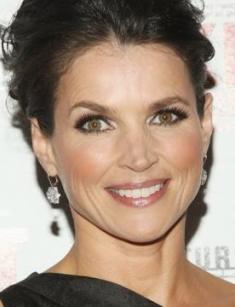 Julia Ormond is the British actress, the star of the movie Witches of East End, Sabrina and The Barber of Siberia.

Julia was born in Epsom, which is located in the English county of Surrey. The mother of the future actress, Josephine, worked as a technician-laboratory assistant and her father John was engaged in software development. According to the family legend, the Ormond genus is one of the most famous in the country and originates from the sister of the Prince Owain Glyndŵr of Wales.

The girl's father became a millionaire at the age of 30 thanks to his ideas and abilities, so Julia spent the first years of her life in a 20-room mansion. But her parents divorced later. The girl continued to see her father on Sundays but the material side of her life changed completely. Ormond even had to work as a waitress and saleswoman in high school.

Julia was famous for her sharp, explosive character at an early age. Ormond spent much more time with bullying boys than girls. By the way, the creative abilities of the future star appeared in her youth. It turned out that Julia could draw well. The girl attended art school. However, she left this school a year later because she decided to devote herself to the stage.

Julia moved to London and entered the Webber Douglas Academy of Dramatic Art. The young actress began creative activities in the movie theater, as well as playing on the stage of theaters, after graduating from the prestigious university in 1988. The theatrical debut of the actress was the work in the play and the first appearance of Ormond on TV was her role in the advertising of the curd product.

Ormond got the Olivier Awards for the role in the play My Zinc Bed. And the magazine People included the British actress in the list of the most beautiful women of the world in 1995.

Julia Ormond starred mainly in television series and television movies at the beginning of her career. In the late 1980s, the name of the aspiring actress appeared in the credits of the series The Ruth Rendell Mysteries, Traffic, Capital City, where Julia had episodic roles.

The most important work of that period was the biographical movie Young Catherine, where the actress appeared in the role of the Russian Empress Catherine II. Besides, the TV star starred in the historical tape Stalin, in which Julia got the part of Nadezhda Alliluyeva, the second wife of the leader.

Julia was always interested in Russia. The TV star read and learned about the history of this country and she agreed, when she had the opportunity to work with Russian directors. For example, Ormond liked the cooperation with Nikita Mikhalkov, who invited the British actress to star in the historical drama The Barber of Siberia in the primary role of the American woman Jane Callahan.

Julia noted that working with Russian filmmakers is different from working in Hollywood. For example, Julia Ormond had a trip to the United States, where the actress studied the architecture and culture of the hometown of the heroine. She did it to get used to the role of an American citizen, who was originally from Chicago.

In addition to projects about Russia, Julia Ormond starred in the drama Nostradamus in the mid-'90s, a criminal movie Trapped. The TV star appeared in the lead roles everywhere.

Also, the actress managed to work with Brad Pitt in the Western Legends of the Fall, with Sean Connery in the adventure tape First Knight, Tim Roth in the thriller Captives, Ralph Fiennes in the outrageous drama The Baby Of Macon.

Julia`s other star work was a romantic comedy Sabrina, in which the partner of the girl was Harrison Ford. This tape is the peak in Ormond's career. There was a story about the wedding of the younger brother of the family in Hollywood comedy. The success of the event is under threat after the return of the first lover of the hero. The elder brother Larrabee makes the girl fall in love with him and persuades to go back to Europe together to prevent scandal.

The thriller Smilla's Sense of Snow occupies the first half of the filmography, which failed at the box office.

The performer starred a lot in the new century. The TV star starred in the war movie Varian's War, the drama Serving Sara, the detective I Know Who Killed Me, the family comedy Kit Kittredge: An American Girl. Besides, she was involved in the filming of the biographical drama The Wronged Man and Temple Grandin. Ormond believes that everybody can more often find an interesting script on television than in a full-length movie in the XXI century. Julia likes the episodic roles, where the actor can improvise and experiment with the images.

But Julia Ormond did not disappear forever from a full-length movie. The TV star can be seen in such movies as The Curious Case of Benjamin Button, the tape about the life of Marilyn Monroe My Week With Marilyn, the horror movie Chained and the Spanish historical drama La conjura de El Escorial.

The actress shone in the British fantasy series Witches of East End, in the action Mary and the science fiction thriller Incorporated in recent years.

Julia Ormond married her colleague Rory Edwards. The wedding took place in 1989 but the young people were in a marriage for a little more than four years, then they divorced officially.

The actress had a new phase in personal life after some time. Julia met her second husband. He was a political activist and professional advertiser Jon Rubin. The lovers married in 1999. There was one more person in her family five years later: Julia gave birth to her only daughter Sophie, who became an artist. In 2007, the couple decided to live separately for some time and did not live together after that.

Julia Ormond leads a social life. Ormond established the Alliance to Stop Slavery and End Trafficking (ASSET).[19]ASSET was instrumental in passing the California Transparency in Supply Chains Act. The law, requiring owners of companies to provide evidence of the legality of the funds, began to operate in California thanks to the efforts of the TV star.

Besides, the actress supports an independent company Transatlantic Partners Against AIDS. Ormond has to raise awareness about the threat of the disease of the twentieth century the inhabitants of Eastern Europe. Julia should do it in Russia and Ukraine.

The TV star disapproves those Hollywood stars, who appear in advertising. Julia believes that such videos infringe on the dignity of ordinary women and praise the beauty of movie stars. Ormond is not shy of her age and shows a good mood and a charming smile on the photo, where she appears.

The TV star remains successful in the profession. In addition to her social and family concerns, Julia Ormond regularly appears on the screen. The fantastic detective story Rememory, in which she starred, was released in 2017. This movie tells about the death of a brilliant scientist before the presentation of scientific discovery. Julia Ormond has a net worth of $5 million.

The sports tape Tour de Pharmacy was released this year, where Ormond received the role of the second plan. The tape talks about the cycling race 1982, in which all participants were caught on doping. The performer lit up in the mini-series Howards End, which was created in the genre of melodrama. Nowadays, Julia Ormond stares in the comedy movie Ladies in Black, in which she plays the main character, Magda.