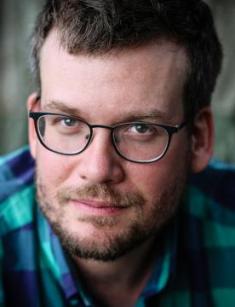 The American novelist is called the most popular author of online technology. John Green created a series of 11 educational programs, launched a YouTube channel VlogBrothers, as well as Project for Awesome and VidCon along with his brother. But the aspiring author became famous after the release of such bestsellers for teenagers as "Looking for Alaska," "The Fault in Our Stars " and "Paper Towns," which brought him the Edgar Allan Poe Awards and the Michael L. Printz Award.

In 2014, Time magazine included John Green in the list of the 100 Most Influential People in the World and the movie adaptation of the novel The Fault in Our Stars became the leader of the American boxing office, collecting $124,438,000 in America.

The famous writer was born in August 1977 in the Midwest of America, in the densely populated capital of Indiana, Indianapolis. Mike and Sydney Green moved to Michigan, then to Alabama in search of a better place under the sun three months after the birth of their son.

The young family lived in Florida. John Green went to school in Orlando.

Then the family returned to Alabama, where the teenager was taken to Indian Springs School outside of Birmingham. John Green graduated from Kenyon College in 2000: the young author got a diploma in religious studies and English literature.

23-year-old John Green worked in a children's hospital as an assistant chaplain for six months, after graduating from college. He intended to become an Episcopal priest but it inspired him to write when he saw the seriously ill children.

The writer's biography of John Green began in Chicago, where he moved after working in the hospital. The young author got a job as an assistant editor in the magazine Booklist. He wrote reviews, presenting hundreds of books.

Talented Green wrote reviews for the New York Times and John wrote original essays for the local radio station. Green wrote his first novel, which was called " Looking for Alaska" in Chicago. He finished his book in New York, where he lived with his wife Sarah for two years.

Readers saw the novel "Looking for Alaska" in 2005. It is a teenage story, John Green wrote it, when Indian Springs School inspired him.

The book had a resounding success: John Green received his first Michael L. Printz Award for his work, which The American Library Association gives talented authors every year. Association and critics called the novel the best book of 2005. It was in the top 10 of Alabama. In 2012, the book was included in the list of bestsellers for children, according to the New York Times.

"An Abundance of Katherines" is the second novel of the American author. This book was published in 2006. It is less popular book than his first work but he received a lot of awards for this book too.

John Green pleased his readers with his bright story "A Cheertastic Christmas Miracle," which was included in the collection "Let It Snow: Three Holiday Romances" the following year. The book consists of 3 stories about the adventures of teenagers on Christmas Eve. Lauren Myracle and Maureen Johnson wrote two other books.

The American author gave his novel "Paper Towns" his readers in 2008. The book took the 5th place in the list of children's bestsellers, he received the Edgar Allan Poe Awards and for this book. The novelist wrote the script for the same movie.

In 2015, the movie company " Twentieth Century Fox Film Corporation " made the second movie, which was based on Green's novel "Paper Towns." The premiere took place in June, Nat Wolff and Cara Delevingne had the leading roles in this tape.

John Green's fans welcomed the release of a new novel called " Will Grayson, Will Grayson " two years after the release of the book "Paper Towns," which was written in collaboration with the writer David Levithan. This novel was awarded the Stonewall Book Award. It is a literary award, which is sponsored by the American Library Association.

In 2009, John Green told reporters that he started writing the novel "The Sequel," but he postponed his work for some reasons. The novelist finished this novel in 2012 but the name was changed to "The Fault in Our Stars." The author gave the fans a gift: he signed 150,000 copies of the first edition.

In the summer of 2014, his novel appeared on the screens of American movie theatres. And the movie The Fault in Our Stars was released in Russia in September. Ansel Elgort, Shailene Woodley got the leading roles.

In 2015, John Green dropped in rankings in Forbes as the highly paid author. His annual income is $9 million.

John Green lives in Indianapolis with his wife Sarah and children. The couple brings up their son Henry and daughter Alice, who was named after the former American President Barack Obama. The President recommended calling Alice, the newborn girl during a video chat when Green asked his advice.

The writer is a parishioner of the Episcopal church. He has a macabre hobby. He collects the statements of the dying stars. John Green believes that the words of Oscar Wilde were the best, who said at the end of his life:

"No, either you take this wallpaper off, or I die."

Green's video blogs are favorite as well as his books. His brother and his wife are involved in their development. Sarah worked as a curator of the city museum of art and she makes video blogs on television now.

The release of Green`s latest bestseller " The Fault in Our Stars " was five years ago. In October 2017, fans of the American author waited for a new novel called " Turtles All the Way Down." John Green has a net worth of $17 million.

The novel has a detective line but the central theme is the struggle of the heroine with her mental illness, obsessive-compulsive disorder. There are love and friendship in the novel. John Green admitted before the release of the book:

"It is my first attempt to write directly about the mental illness that I have since childhood. Although the story is fictional, it is very personal too."

Paper people live in paper houses and heat their future. Paper kids drink beer, which was bought from some homeless guy in a paper grocery store. And everyone's obsessed with getting more stuff. And the stuff is all thin and frail, like paper. And people are the same.

The marks that most people leave are scars.

Do you know what is your problem, Quentin? You keep expecting people to stop being who they are.

...the best way to please people is not to love them very much.

Some tourists think that Amsterdam is a city of sin but in fact, it is a city of freedom. Most people choose to sin in liberty.