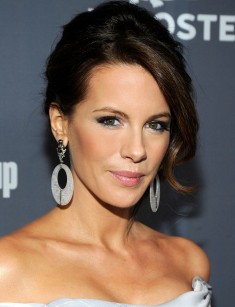 Kate Beckinsale is a British actress. She is known to the audience due to her participation in the movies Pearl Harbor, Van Helsing, and Underworld.

Kathrin Romany Beckinsale was born in the family of actors in London. His mother is a theatre and TV actress Judy Loe (till present days), his father is a famous comedy actor Richard Beckinsale who took part in many British series and comedies.

Kate Beckinsale had begun her creative career when the girl was just three weeks old. The future celebrity has "performed" the newborn baby in the series Harriette Comes Back to the City. Kate had a happy childhood. The caring and loving parents surrounded her, and there was a creative atmosphere in her family house. But when the girl hardly turned six years old, the tragedy happened in her family. Her father suddenly died of the heart attack at the age of thirty-one.

Three years later, Judy got married again. The TV director Roy Battersby became the girl’s stepfather. The nine-year-old Kate at first has taken her stepfather with antipathy. Kate constantly had conflicts with Battersby's sons. When she has matured, she has made friends with her stepbrothers and her sister. Moreover, the stepdaughter has begun to get on well with Roy who has surrounded Kate with warmness and attention.

Since the early age, Kate Beckinsale has been considered to be an artistic and creative child. Already while studying at a private London school, the girl won the prestigious contests of the beginning writers. The girl was very interested in the literature, but she was also attracted to the world of cinematography. Still being a young schoolgirl, Beckinsale took part in the picture telling about the World War II. The movie One Against the Wind was released in 1991.

After Kate Beckinsale had finished schools, she became the student of Oxford University where she had profound studies of the French language and Russian literature. But at last, she has chosen cinematography. After three years of studies, the girl understood that it was difficult to find time for two passions. Kate Beckinsale left Oxford and became engaged in the shootings of the new projects.

Still being the student of the first year, Kate has received the invitation to take part in the film Much Ado About Nothing directed by Kenneth Branagh. In 1993 Beckinsale was working on the movie set of the film Prince of Jutland. The same year the girl received the offer from the director Jim McBride to take part in the mystical thriller under the title Uncovered. In the summer when the students have gone for the vacations, Kate Beckinsale was again working on the movie set. The picture has become successful, and the young actress who played the leading role began to get many invitations from the directors. Kate gave up her studies. In such a way the actress has already started her creative career.

In 1994 Beckinsale participated in the comedy movie Cold Comfort Farm, and after this, he had a break in his career. The actress denied the roles in the proposed parts of class "B" and preferred stage to it. In 1995 the actress performed in the performance The Seagull which was shown on the stage of the Thelma Holt Theater. With the actors’ troupe, Kate traveled around Great Britain. The actress decided to accept the invitation when she was offered to play a role in the movie Haunted, which she thought to be interesting.

Later she received roles in the pictures Emma (based on the novel of Jane Austen) and Shooting Fish. The movies haven’t gained great success, but the project Pearl Harbor project has brought real popularity to the actress. The film was released in 2001. The project hasn’t received high appreciation from the movie critics but has got positive feedback from the audience. The film has grossed $200 million. The actors who have played in this movie have instantly become famous.

The following projects in which the British actress took part in 2002 were less successful. The comedy melodrama Serendipity and the movie Laurel Canyon were released in the limited hire. The critics and TV spectators haven't appreciated these pictures.

But in 2003 the actress has had new success. Kate Beckinsale took part in the significant "solo" project under the title Underworld directed by Wiseman. This project has brought a new portion of glory to the actress. Most of all the spectators have liked the video where it was shown the struggle of the vampires and werewolves.

The year 2004 was also plentiful for Beckinsale. The actress participated in two pictures: the expensive American project Van Helsing and in the movie The Aviator. The first movie despite great investments hasn't received the expected success. Her role in the film The Aviator has contributed to Kate's take off in her acting career. The Aviator was nominated in six categories for Academic Awards.

Her next movie project Underworld: Evolution has also become successful for the actress. In this movie, the British actress has played the leading role. The picture was released at the very beginning of 2006 and earned a huge sum in the hire. The critics and audience again began to talk about Kate Beckinsale who performed the leading role of the vampire Selene.

The movie Click was met positively by the audience and was highly appreciated by the critics. In this picture, the actress worked together with the actor Adam Sandler. The same year 2006 the actress took part in the picture Vacancy. The above-mentioned movie and the tape Snow Angels were also successful after the release on the big screens.

In 2008 Kate Beckinsale took part in the prequel to two previous parts under the title Underworld: Rise of the Lycans in which she embodied the character of the vampire Selene. This fantastic horror movie and the extremely gripping fighter Contraband directed by Baltasar Kormákur are the latest brightest pictures with the participation of Kate.

A couple of bright love affairs represent the personal life of Kate Beckinsale. The first love affair of the actress which was discussed in the press was the relationship with Edmund Moriarty. Then Kate was a student of Oxford and was taking part in the play A View from the Bridge. Edmund also took part in this play.

But in a short time during the shootings of the movie Much Ado about Nothing Beckinsale got acquainted with the actor Michael Sheen. The couple got married. In January of 1999, their daughter Lily Mo Sheen was born. Four years later after the birth of their daughter, the young people broke up.

The British actress has met her new beloved man during the shootings of the movie Underworld. Then, Beckinsale began to have a love affair with the director of the movie Len Wiseman who later became the husband of the actress. In May 2004 they celebrated their wedding, but in November of 2015, they separated.

In March, 2019 it became known about the relationship of Kate Beckinsale and Pete Davidson. Western tabloids continue to discuss the details about the love affair of Kate who is twenty years older than Pete. People began to talk about the couple after Golden Globe Awards ceremony, where they were captured embracing each other. In February they already began to appear in public.

In November of 2016, Kate visited Moscow. The actress held the presentation of the fifth part of the movie Underworld in the capital of Russia. The British actress told the mass media representatives about the attitude of the movie critics towards Russian culture and also reported about the probable participation in the shootings of the Russian movie.

By the words of celebrity, at Oxford, she was learning Russian language and was fond of reading Chekhov and Dostoevsky. Besides, she performed the role of Nina in the theatrical play The Seagull. According to the actress, the play was staged by "someone from Russia." In the interview, Kate noticed that she would like to take part in the screen adaptation of Dostoevsky’s literary works.

In 2016 the British actress had a conversation with the American journalist Larry King. She said to the famous TV host that she had written the "black" comedy about the family relations and also reported some little-known details from her childhood. Moreover, the actress noticed that she preferred playing the roles in the fighters than to take part in melodramas. The movie actress herself is happy with this fact.

"In childhood, I didn't practice karate every day, and I wasn't fond of the sports at all. I'm proud that I have become one of the women who take part in the fighters. Not many of us take part in such movies", – Kate confessed to the representatives of the Russian mass media.

The fans appreciate the actress's appearance. The most influential tabloids of the world also pay attention to the beautiful British actress. In particular, Kate has been included to the rate of "the hottest stars" of Maxim magazine. In the list of Maxim magazine Beckinsale has taken the 12th place.

The users of the social networks repeatedly tried to find the photos of the actress where she appeared naked. In 2017 Kate posted a picture in a bikini on Instagram. Such frank shooting was appreciated by the fans of the movie actress who are admired by the ideal figure of the actress (Kate is 170 cm tall and weighs 54 kilos).

The American mass media repeatedly informed that Kate had changed her appearance with the help of the plastic surgery. In particular, the journalists announced that the actress had had an operation on the endoscopic face lifting, and it was impossible to compare the changes before and after the plastic surgery. The stitches could hardly be noticed in the photos. Kate herself didn't comment on the assumptions of the mass media representatives and answered that the unique peculiarities of her appearance were the result of her good genetics. 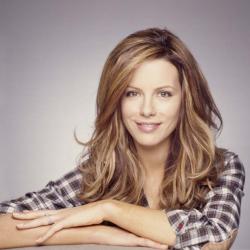