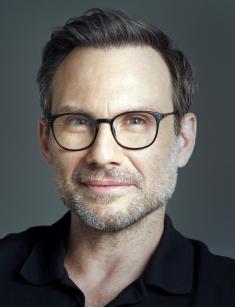 Just like all people, Hollywood actors may make mistakes or wrong choices. However, everybody deserves a second chance. The actor Christian Slater did that on time and defeated his alcohol and drug addiction to return to movie screens after a long period of silence.

Christian Michael Leonard Slater was born on August 18, 1969, in New York. His family was artistic: the father, Michael Hawkins, was an actor, and the mother, Mary Jo Slater (née Lawton), worked as a casting administrator. It was not surprising when Christian chose a movie career.

When the child turned seven, his parents divorced. Christian stayed with his mother and took her second name. In 1983, his younger brother Ryan was born; he also devoted his life to acting.

The would-be artist began to build his career early and participated in TV series and Broadway shows from eight.

In 1981, the twelve-year-old actor got his first role in a feature movie: he played a boy Billy in a Sherlock Holmes screen adaptation. The next work was more significant: Christian appeared in the 1985 action movie The Legend of Billie Jean starring his namesake Helen Slater.

The following project was truly advantageous: the historical thriller The Name of the Rose based on the iconic book of Umberto Eco. It was a story about a serial killer in an Italian monastery. 17-year-old Slater played the young assistant of the experienced detective and monk (Sean Connery). Although the novelist did not like the screen version of his work, the audience and critics welcomed it. The project also starred Valentina Vargas, Helmut Qualtinger, and Elya Baskin.

The next role was entirely different: in 1988, the young man played a daredevil Jason "J.D." Dean in the crime thriller Heathers. Winona Ryder and Shannen Doherty were his stage partners.

The new decade began with the lead roles of the DJ Mark Hunter in the music drama Pump Up the Volume and Will Scarlet in the action movie Robin Hood: Prince of Thieves. Critics welcomed both projects enthusiastically and extended the promising actor’s filmography; the various stage-type characters showed his talent from different angles.

Later on, the secondary role in the crime drama Mobsters brought the actor the dubious distinction: he was nominated for the Golden Raspberry. However, Christian rehabilitated soon and won 1992 MTV Movie Award - Most Desirable Male for the comedy Kuffs with Milla Jovovich.

The next year, the actor had an advantageous offer: the lead role in Tony Scott’s thriller True Romance about a marginal couple. Christian personified Clarence Worley who fell in love with a prostitute Alabama (Patricia Arquette) and got involved in a crime story with pimps, murders, and escapes.

1994 brought one of the brightest and most important roles in Slater’s filmography: he played the reporter Daniel Molloy who talked to a real vampire in the stylish horror Interview with the Vampire. The project was based on Anne Rice’s novel and grossed more than $200 million. The popular sex symbols Brad Pitt and Tom Cruise had two other lead roles.

The success was followed by the actor’s disappearance from screens; he had insignificant roles in low-budget movies and series. At that period, he used drugs and alcohol; addiction could have cost the actor his career. Fortunately, Slater proved that he was full of artistic energy; the 2010s brought fans several surprises. Christian appeared in the scandalous 2013 movie Nymphomaniac by Lars von Trier and joined the cast of the crime series Mr. Robot in 2015. The man gained the Golden Globe Award – Best Supporting Actor – Series, Miniseries or Television Film for the latter work. Rami Malek personified the main character, the programmer Elliot Alderson, who had social anxiety.

The actor’s personal life has been full of bright romances; he has been married twice and dated several Hollywood beauties.

Slater met young Winona Ryder at the movie set of Heathers and fell in love immediately. The couple dated for a short while; Chris confessed in his later interviews that he could not forget the actress. Further on, the artist was seeing his colleague Christina Applegate and the femme fatal Patricia Arquette, his partner in the movie True Romance.

The reporter Ryan Haddon became Christian’s first wife. The couple married in 2000; their son Jaden had already been born. The next year, the family welcomed the daughter Eliana. However, the kids could not save the family; Christian and Ryan divorced in 2006.

In 2010, the actor met Brittany Lopez who was 17 years younger than the man; they married in 2013. The couple has no children.

The actor is not an active user of social networks: he rarely posts personal pictures or writes about himself; little is known about the actor’s present-day life.

Apparently, he continues to work on the series Mr. Robot; the artist is open for new offers.