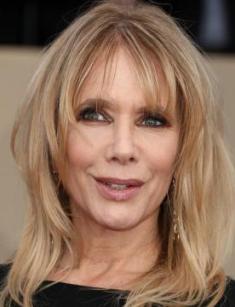 American actress Rosanna Arquette is an outstanding representative of the famous family, the oldest daughter of actor and producer Lewis Arquette and sister of Hollywood stars, Patricia and David Arquette. She reached the peak of her career in the 80 and 90s. This period is marked by prominent leading roles, but the actress has also played bit parts brilliantly and could even overshadow the title characters.

Rosanna Lisa Arquette was born on August 10, 1959, in New York City, becoming the oldest child of the third generation of the artistic dynasty. The actress's grandfather is Cliff Arquette, a television comedian of French and Canadian descent (his surname was originally "Arcouet").

Father Lewis Arquette is a screenwriter, actor, producer, and theater personality. Her mother, actress and poetess Brenda Olivia "Mardi" (née Nowak), was a Jew who survived the Holocaust, her ancestors immigrated to the USA from Ukraine and Russia. Later, the woman gave birth to four more children: Richmond, Patricia, Alexis, and David. All of them followed in their parents’ footsteps.

The actress grew up in the 1960s, when hippies, informalist painters, rock rebels and other people who strove to astonish the Browns and erode the credibility of conservative foundations. The girl used to such an environment thanks to the bohemian parents.

She attended with her mother and father various rallies and demonstrations. e.g., against the Vietnam War, racial discrimination, etc. Once, Martin Luther King Jr. even shook hands with the girl.

They lived in different cities. The family moved to Los Angeles, where her father worked, then to Chicago, where he managed the theater for several years. Only in 1970, the family settled in the arts community of Front Royal, Virginia. Rosanna wanted to leave the house so much that she actually ran away and hitchhiked to California to conquer Hollywood when she was 15.

Of course, Rosanna did not immediately get a role. At that time, haunting the thresholds of casting agencies, she even had to dream of bit parts. When in 1978 the girl was cast in a minor role in the horror The Dark Secret of Harvest Home, she celebrated her first victory. They began to talk about Arquette as a promising dramatic actress in 1982, after the release of the television movie The Executioner's Song, in which she played a leading role, alongside Tommy Lee Jones. For this work, the actress was nominated for an Emmy Award.

A real success was a meeting with director John Sayles, with whom Rosanna had a serious love affair. He was working on his first Hollywood movie and cast the girlfriend in the lead role in Baby It's You (1983).

In 1985, Rosanna had a real triumph. The novice actress played with Madonna in the comedy melodrama Desperately Seeking Susan. The role of the eccentric housewife, Roberta, brought Arquette the recognition of professionals; the actress won the BAFTA Award for Best Actress in a Supporting Role. Her dream also came true, and she became very famous.

Riding the wave of popularity, the actress starred in several successful movies: Silverado (1985), 8 Million Ways to Die (1986), After Hours (1985). The last film was directed by outstanding Martin Scorsese.

However, soon eccentric Arquette decided to stop shooting in Hollywood movies and make her debut in European projects. Moreover, the director Luc Besson invited her to his film The Big Blue (1988). The American woman played an employee of an insurance agency, who was in love with a professional diver whose dangerous hobby ended tragically. The partner of the movie star was the famous French heartthrob, Jean Reno.

The actress has been lucky to work with famous actors. In 1989, the actress co-starred with Nick Nolte in Martin Scorsese’s new drama New York Stories (Scorsese made one of three short stories along with Woody Allen and Francis Ford Coppola). In 1991, the comedy The Linguini Incident was released, starring Rosanna Arquette and David Bowie.

The beginning of the 90s was the peak of Arquette’s career. Two bright top-grossing movies contributed to the world-fame of the actress. In 1993, she played a leading role in the drama action movie Nowhere to Run, portraying a young lonely farmer, whose lands were the target of attack of bandits. Jean-Claude Van Damme helped the woman. The movie grossed more than $52 million at the box office.

One year later, Quentin Tarantino's legendary crime film Pulp Fiction was released, in which the charismatic blonde got the role of Jody, the wife of a drug dealer. The dizzying success of the movie influenced the popularity of the actress, even though she got a secondary role. The following outstanding projects include Crash (1996), Do Me A Favor (1997), The Whole Nine Yards (2000).

In the early 2000s, the actress, who increasingly began to face age discrimination in Hollywood, made a documentary, showing what actresses have to sacrifice, what kind of pressure they have to experience to get a role. The movie Searching for Debra Winger caused a stir and was shown at the Cannes Film Festival.

In the 21st century, the actress has sorted out her priorities, choosing work on television. Her filmography has dozens of TV series and movies: The Practice, Malcolm in the Middle, Grey's Anatomy, Lipstick Jungle, Private Practice, Ray Donovan, CSI: Cyber. In 2015 and 2016, the actress starred in the black crime comedy Kill Your Friends and the psychological drama Frank & Lola.

The personal life of the actress has never been boring and monotonous. It's just not typical of the Arquette family. Rosanna has never hidden that she began attending parties early, where she could smoke and drink alcohol. She appeared in revealing photoshoots, not only in bikinis, but also topless, or even completely naked.

In 1979, the girl married director Anthony Greco, whom she divorced a year later.

During the first successful years at the Dream Factory, the actress arranged bohemian parties at home, which gathered young actors and musicians. One of them, Steve Porcaro, a member of the group Toto, became the boyfriend of the star. In 1982, he performed the single "Rosanna," dedicated to his lover. The song was a great success; it won the Grammy Award and contributed to Rosanna’s fame.

All the tabloids wrote about the star's new love affair when Arquette began dating the famous English musician, Peter Gabriel.

The third marriage of the celebrity can be called more or less stable. Arquette lived with restaurateur John Sidel for six years, and the couple had daughter Zoe Bleu Sidel (1994).

In August 2013, the actress married for the fourth time. Her husband became American banker Todd Morgan, with whom she lives now. Nowadays, the actress tries not to make her private life public. So, her Instagram page is closed.

The actress is still in demand in movies and television. Of course, her popularity is not so high as it was in her youth, but she gets enough roles. Only in 2018, she starred in 8 episodes of the series Sideswiped.

In 2019, two films with the participation of the movie star are expected to be released. These are Lost Transmissions and Holy Lands.

Rosanna Arquette has a net worth of $9 million.