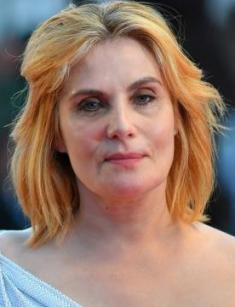 Emmanuelle Seigner’s talent is multilayered: she is a model, actress, and singer, as well as a loving wife and mother. She has been married to the European director Roman Polanski for 30 years and participated in her husband’s projects. In 2013, her work on Polanski’s Venus in Fur brought her the nomination for the César Award.

The would-be actress was born on June 22, 1966, in Paris. Her future was predetermined by the artistic family. The grandfather, Louis Seigner, acted in theater and movie comedies and chaired the Comédie Française association. The father, Jean-Louis, was a famous photographer, and the mother, Aline Ponelle, worked as a journalist.

Emmanuelle was the second child and had two sisters: Mathilde and Marie-Amélie. The elder girls became popular actresses, and the younger one devoted her life to singing. They were all interested in art and learned how to behave in front of their father’s camera: he captured many moments of his daughters’ coming-of-age.

When Emmanuelle was 14, she began to receive offers for magazine photoshoots. Several years later, the young woman was a high-demand model: fashion experts liked her not-so-shining beauty more than doll-faced girls. Vogue, L’Officiel, and other magazines gladly published her pictures.

The 18-year-old beauty met the director Jean-Luc Godard in a hotel bar by chance. He was so charmed with Emmanuelle’s mysterious loveliness that immediately invited her to the movie Détective (1985), and Seigner accepted the offer right away, turning over a new leaf in her career.

The young model had already gained some acting experience in an episode of Year of the Jellyfish, but Godard’s project was entirely differed: she had a small yet notable role of Princess of the Bahamas. Johnny Hallyday and Nathalie Baye played the main characters.

At that period, Emmanuelle met her future husband, Roman Polanski, who had already earned recognition as a director. The man liked young beauties and offered Seigner the lead part in the crime drama Frantic (1988) starring Harrison Ford.

The actress personified the protagonist’s friend, Michelle. Although the movie was a success, it did not turn Emmanuelle into a star. The personal benefit was substantial, though: in August 1989, after the premiere of Frantic, Seigner and Polanski married in Paris.

In 1992, the artist played in her husband’s next work, the melodrama Bitter Moon, and earned the long-awaited popularity. It is the story about the weird love between an American writer and the French woman Mimi. Their romance begins passionately and madly, and only pressing a gun trigger can help escape from this sick and twisted affair.

Polanski showed his muse’s talent in its best: the actress not only looked gorgeous but also proved her ability to transform in any character, from an innocent girl to a femme fatal. When the audience recognized her as a deep dramatic actress, Seigner decided to change her type and started participating in comedies: Le Sourire (The Smile) and La Divine Poursuite (The Gods Must Be Daring).

1998 was one of the most fruitful years for the artist: she debuted in the American cinematography and played the lead character in RPM along with David Arquette and Famke Janssen. Besides, Seigner starred in the French movie Place Vendôme by Nicole Garcia and collaborated with Catherine Deneuve. This role brought Emmanuelle the first nomination for the César Awards for Best Supporting Actress.

In 1999, the celebrity joined another project of her husband. Polanski had been thinking about a mysterious thriller for a long time and finally began to work on The Ninth Gate. Johnny Depp became Emmanuelle’s stage partner. The actress’s role was archetypical: the Whore of Babylon who helps the main character go through all circles of hell.

The new century brought many bright projects again. In 2003, Seigner starred in the drama Corps à Corps (Body to Body). It is a blood-curdling story about a surgeon who tries to revive his wife and daughter. The thriller theme was also present in the next movie, the horror Giallo (2009).

Soon, the actress had a secondary role in the biopic La Vie en Rose (Life in Pink) about the singer Édith Piaf. At the same period, the touching drama The Diving Bell and the Butterfly was released. It tells the story of a glamour magazine editor paralyzed after a stroke; however, he has not lost his thirst for life and communication with people.

In 2017, the audience could enjoy the new movie, Based on a True Story. Seigner’s character is a depressed writer who meets Elle (Eva Green). Their relationship is developing in a weird way.

Emmanuelle Seigner is the third wife of the Academy-Award winner Roman Polanski. The actress did not mind their age difference (30 years) or the man’s scandalous past: he had been accused of raping an underage model in 1977. This unpleasant story came to the surface in 2009 when new so-called victims appeared. Still, the couple survived this time together.

Today, Emmanuelle and Roman live a closed life in the country when they do not work. Their children have grown up and shown much interest in art. The elder daughter, Morgane (born in 1993), studies drama at The Royal Central School of Speech and Drama. The son, Elvis, has been acting since a young age. Emmanuelle often shares pictures with her dear kids on Instagram.

In 2018, the audience saw the actress in the drama At Eternity’s Gate about one of the greatest artists, Vincent van Gogh.

Fall 2019 will bring Polanski’s new project, the drama J’accuse (An Officer and a Spy) about the well-known Dreyfus affair. The director’s muse will personify a bright figure there.