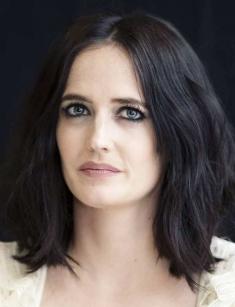 Eva Green is a home-loving person; she believes the desire to express oneself in front of a camera is masochistic. On the other hand, acting is a form of psychotherapy that gives the opportunity to get rid of fears. She does sports to release some negative and prefers brutal men who can spread adrenaline and endorphin around them. Hollywood knows Eva as the gloomy “witch” while the actress calls herself a shy gray mouse with a lot of complexes.

Eva Green was born in Paris on July 6, 1980, two minutes before her twin sister Joy. The model has an attractive appearance thanks to her mixed origin. The girl’s father was a half-French and half-Sweden, and the second name “Green” should be read [ˈɡreːn] according to the Swedish rules. The Jewish mother was born in Algeria.

The artist calls her family bourgeoise and traditional; she says she is very different from her sister who is married to an Italian count and has two children. Joy is not involved in the movie industry. The sisters are not very close. Eva told reporters it could be caused by the teenage problems: they used to quarrel and even fight.

Eva’s father, Walter Green, is a dentist. Her mother, Marlène Jobert, is a popular French actress who prioritized family over career; today, she writes children’s books. Eva’s aunt Marika Green is also an actress, and her uncle Christian Berger is a famous cinematographer.

Although the family had many connections to the movie industry, nobody expected Eva to become an actress: the girl was too shy and silent. The would-be celebrity was a diligent student and mastered her English; she was interested in the history of Egypt. At the age of 14, Eva watched The Story of Adele H. with Isabelle Adjani; the movie impressed her immensely. The teenager realized: she wanted to become an actress.

Eva’s mother did not prevent her daughter from fulfilling her destiny; however, she thought Eva was too fragile for this profession: boldness and insistence were required sometimes. However, the spirit of the fighter was covered under the mask of the shy girl: she overcame her fears. Her characters are hellishly seductive and always get what they desire.

When Eva was 17, she moved to Kent to study English. In 1997-2000, Eva studied acting in prestigious drama schools in Paris, London, and New York.

After graduation, Green played in the theater; the iconic and scandalous director Bernardo Bertolucci noticed the young talent and invited her to his new project, The Dreamers.

“So beautiful, it's indecent”, the director characterized the actress; she appeared nude in the movie. Eva personified a capricious Parisian who behaved a way too skittishly and loose and easily experimented in sex.

“If you’re doing a scene with frontal nudity, then people will think that you’re a pornographic actor or something. It’s really weird — I don’t really understand that mindset”, shared Eva Green in one of her interviews.

The role in the 2005 movie Kingdom of Heaven by Ridley Scott brought Eva international fame. She succeeded at six challenging auditions and received the part of Queen of Jerusalem; Orlando Bloom played the main character. Although critics’ reaction was ambiguous and the dialogues and characters’ presentation raised questions, many people praised the artist for her dedication and emphasized Eva had the royal grace that planished the bumps of the role.

Casino Royale was the second Hollywood project for Eva. This action movie became a milestone in Daniel Craig’s career: the British actor received international recognition after he personified the fighter against the mafia.

Initially, Eva was reluctant to become another girlfriend of the agent; however, as long as she read the script, she liked her character. In 2007, Entertainment Weekly named Green the fourth-best Bond girl of all time. Besides, the woman got the prestigious BAFTA Rising Star Award and played the witches’ queen in the fantastic movie The Golden Compass. Further on, she often personified witches and noble characters.

2011 was marked with the roles of Morgan Pendragon in the series Camelot and the witch in Tim Burton’s tragicomedy Dark Shadows starring Johnny Depp. Burton brought the actress her natural hair color: Green is blonde.

In 2014, Eva Green appeared in the second part of the epic franchise, 300: Rise of an Empire. Her charm and robust acting attracted the audience’s attention so much that even strong male characters somehow paled near her.

The movie shows the events before, during, and after the original story released in 2006. Green personified the leader of the Persian fleet, Artemisia, whose ambitions did not let the war between the Greek and the Persians finish. The Game of Thrones star Lena Headey and Jack O'Connell famous for his role in Unbroken became Eva’s stage partners. Despite the movie title, it is the story about how King Xerxes I came into being and how the Battles of Artemisium and Salamis took place rather than the battle of Leonidas I.

The same year brought the long-awaited movie Sin City: A Dame to Kill For. Eva played a femme fatal Ava Lord and stuck in fans’ memories for good.

In spring 2014, the premiere of the horror series Penny Dreadful took place. The artist played one of the lead characters, the most mysterious woman in London Vanessa Ives. The picture combines the historical background – Victorian England – and the mysterious plot. The well-known literature figures are present here: Dorian Gray, Victor Frankenstein, Abraham Van Helsing, Dr.Henry Jekyll, and others.

Timothy Dalton personified the main character, the famous traveler Malcolm Murray, who gathered together a team of outstanding people to look for his daughter and fight against the secret evil.

In June 2014, the news about the second season of Penny Dreadful came out. The next year, the third season consisting of nine episodes was announced. The final episodes were aired in June 2016; further on, the creator of the project John Logan said the show was closed.

In 2017, the French actress played in Roman Polanski’s psychological thriller Based on a True Story. It is based on Delphine de Vigan’s novel under the same title. The book received two French prizes in literature; the awards were as prestigious as the Prix Goncourt.

In March 2017, Eva Green gained the role of a trapeze artist, Colette Marchant, in Tim Burton’s remake of the Disney cartoon Dumbo; the premiere took place in 2019. The movie is darker and more realistic; it contains many social problems: for instance, a wealthy businessman tries to buy a circus, and there are plots in the troop.

Eva Green likes to participate in photo sessions, and many popular magazines publish her pictures on its covers: Vogue, L'Officiel, GQ, and others. Although the actress is short for modeling (5.51 feet or 168 cm.), her body type is advantageous, and she looks good in half-length photos.

Eva collaborates with Dior, Armani, and Lancôme; she presented Dior’s Midnight Poison perfume. Commercials with the actress are regularly marked as the most beautiful videos.

The enigmatic celebrity appeared in the mysterious commercial video for Jaguar; a real predator was involved in the filming. In the 2000s, the actress promoted the brewing company Heineken. As it turned out, the organization sponsored the movie Casino Royale. Stephen Gaghan who won the Academy Award for Best Adapted Screenplay for the thriller Traffic created the video.

Eva Green dated the actor Marton Csokas for five years. They met at the movie set of Kingdom of Heaven and split up in 2009.

In 2015, the media were talking about the woman’s romance with Tim Burton who had already broken up with Helena Bonham Carter. Since that time, there has been no information about Eva’s boyfriends.

“'I don't like flirting, and when I love someone, I always give everything, maybe too much. And then you have to work at it all the time. <…> I think I wouldn't be able to live with somebody now. I've decided I think it's nice to be independent and have your own space”, the actress told journalists once.

The border terrier Griffin is the actress’s only companion. According to Eva, she cannot imagine her life without him. When the woman learned that pets were not allowed in the train from London to Paris, she considered pretending to be a blind person with a guide dog.

In 2007, Empire gave Eva Green the sixth place among the sexiest women of all times. However, the actress avoids the femme-fatal image in real life: she wears modest clothes and looks natural. Eva likes baggy, multi-layered garments and dark colors; she is indifferent to fashion and tries to finish shopping as soon as possible.

When journalists ask her about her age, the woman jokes she has never been young: she thinks too much and feels like an old lady.

Eva Green emphasizes her rationality and even “Nordic” nature. She notices that people see her as a cold person and keeps her distance; acting is the best opportunity for her to wear a mask.

There are a dozen Twitter and Instagram accounts under Eva Green’s name. However, the artist does not reveal whether she is registered there. One can find her hot photos in a swimsuit only in the thriller White Bird in a Blizzard.

In 2018, the biopic about the writer Virginia Woolf was released. The feature movie tells the story of her romance with the English noble woman Vita Sackville-West. The project starred Eva Green and Gemma Arterton.

Soon, the audience will see Green as an astronaut preparing for a long stay at the International Space Station. The French sci-fi movie Proxima stars Matt Dillon and Lars Eidinger. The filming took place in Zvyozdny gorodok in the Moscow region; the Hollywood celebrity surprised those who were shopping in a local supermarket. As the Bvlgari ambassador, Green was an honorary guest at the vintage jewelry exhibition in the Church of the Deposition of the Robe in the Kremlin.