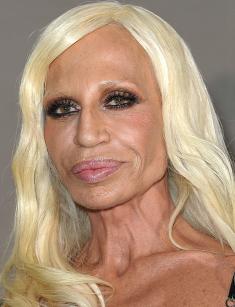 Donatella Versace is an Italian fashion designer and the leading figure of the Versace fashion house. She is the sister of Gianni Versace, the founder of the international brand. The woman’s career has been closely connected to her famous sibling, yet she is also an independent and distinctive designer on her own.

Donatella was born in Reggio di Calabria, Italy; she was the youngest among the four children in the family. Her father worked as a salesman, and the mother made clothes for local fashion lovers in her own tailor’s shop. Unfortunately, the eldest sister Tina died early. Donatella grew up with two brothers, Gianni and Santo; the kids were good friends.

As the young woman graduated from school and college, she went to Florence with Gianni. The city was known as the best place to study clothes construction. When the elder brother founded his company Gianni Versace, he invited his relatives and turned it into the family business. By the way, Versace devoted his famous Blonde and Versus to his sister.

Donatella was responsible for advertising, photo shoots, and PR campaigns. When Gianni was murdered, the family and business had to face many ordeals. Donatella worked hard to retrieve vilifying materials about her brother and the family from the public domain. Three months after Gianni’s death, she debuted with her debuting collection.

The public and experts were not much enthusiastic about Donatella’s first clothing line. Still, the young woman was industrious: she kept creating her own models and shaping the old collections that had not been presented before. Donatella focused on making something unique without copying her legendary brother.

Little by little, the designer developed her style: the clothes became more feminine and less sexy and aggressively bright as the founder of the fashion house preferred. Versace’s popularity grew when she presented her Green Versace Dress nicknamed “jungle green”. When Jennifer Lopez attended the Grammy ceremony wearing that dress, it was a breakthrough. Donatella received the long-awaited recognition.

Soon, the woman shocked the audience again: she used her connections and invited top celebrities to participate in her fashion show: Christina Aguilera, Madonna, Demi Moore, Beyoncé, Jonathan Rhys Meyers, and others. Thus, Donatella was the first designer who used this strategy.

Another way to restore the family reputation was the luxurious resort Palazzo Versace in Australia; in a while, a hotel in Dubai under the same name appeared. Donatella created the unique furniture and bedclothes collection for them.

Donatella Versace’s private life has been less successful than her career. The woman used to be married to a model and actor Paul Beck; they had two children together: the daughter Allegra and the son Daniel. However, she was disappointed in the marriage and left her husband. Allegra became the main successor of her famous uncle: she received 50% of the Versace stock.

Manuel Dallori was Donatella’s second husband; they spent a year together.

Today, Donatella is frequently moving from one city to another and has no permanent residence.

In 1998, the story of the Versace’s family was shown in the movie The Versace Murder; Dania Deville personified Donatella. Besides, the 2013 TV movie House of Versace tells the story of the popular designer; Gina Gershon played her. Lady Gaga devoted the song “Donatella” to the woman.

The celebrity is also involved in cinematography: she participated in Zoolander and the 2006 movie hit The Devil Wears Prada as a costume and accessories consultant.

Donatella does not keep secret she used plastic surgery; she confesses she regrets about it. Today, many media include the designer in the lists of unsuccessful surgery victims.

Young Donatella did not have a doll face or a model’s height (5.15 feet or 157 cm.). It was painful for the woman involved in the fashion industry; as a result, she decided to undergo procedures: labiaplasty, rhinoplasty, mammaplasty, laser resurfacing, botulinum toxin injections, and zirconium crowns.

Although the procedures were expensive and clinics were selected thoroughly, the surgery did not go well. Thus, Donatella Versace often tops the lists of the ugliest celebrities in fashion magazines. The woman is not upset by these ratings; the very fact of having plastic surgery discourages her. She confessed it took her too much time to realize that real beauty was something inner.

The ideas about inner beauty do not prevent Donatella from creating clothing collections for those who want to look pretty outside. She has an official Instagram page; more than four million people follow her. The pictures are mostly focused on fashion shows and preparations; there are no home photos or videos.

In November 2017, Donatella Versace’s figure was shown in the new season of the series American Crime Story about Gianni’s murder. Penélope Cruz played Donatella; Ryan Murphy directed the project and wrote the script. The series illustrates how the popular designer was killed and what events had taken place before that. The premiere was held on January 17, 2018.

In 2017, Donatella was a co-host of the ball at The Costume Institute, The Metropolitan Museum of Art. The theme of the event was as follows: Heavenly Bodies: Fashion and the Catholic Imagination. One could see the connection of the religious traditions, the famous designers of the past, and modern masters. The Vatican supported the Institute and provided 50 exhibits: Catholic accessors, Pope’s clothes, rings, and tiaras.

Rumors have it Allegra is wealthier than her mother: the daughter has about $900 million while Donatella’s net worth is $400 million. The rich successor does not attend parties or go out often; she is not involved in scandals. Allegra lives in Milan and New York and runs the company; she also accompanies her mother at theme parties as the Versace representative.