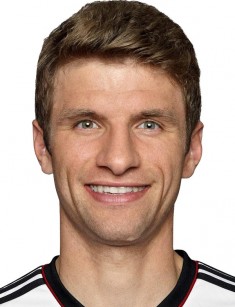 Thomas Müller is a phenomenal person of modern football not only in Germany but also in the world. Johan Cruyff believes that the football player does the right thing. According to Joachim Löw, no one knows what to expect from such an extraordinary player. At first glance, he seems an indolent person, but he becomes a perfect player in the game. Miroslav Klose, the FIFA World Cup record goalscorer, suggested that his colleague would soon surpass him. Former Bavaria coach Ottmar Hitzfeld predicts that Thomas would be quickly a captain.

Thomas was born to Klaudia and Gerhard Müller on September 13, 1989. The family lived in the village of Pahl (Weilheim-Schongau district). Soon his father took Thomas and his brother, Simon, who is two and a half years younger, to a local sports school.

The brothers kicked the ball day and night. As a rule, the elder brother won, and the youngest one was proud of rare victories, which he achieved with the help of a friend. Even today, Simon sends Thomas SMS messages with best wishes before every Bayern match.

The "all-seeing" football player went on for the first time in 1994. His coach was Peter Hackle. The mentor recalled that the child immediately became the brains of the team and distinguished himself with vigor and will to win.

Thomas’s first club was the local TSV Pahl. FC Bayern Munich noticed a ten-year-old boy who scored 120 goals out of 195 during the season. The last name also played an essential role as Müller for Germany is like Yashin for Russia.

But Thomas did not want to leave his house, and he preferred to go by train every day to the Bayern sports school. In 2000, the young football player finally decided to change the village to the capital of Bavaria. Thus, Müller started his professional football career.

Even in the FC Bayern Munich Junior Team, the position of Thomas became the subject of lengthy discussions. He went on the field as a second striker and center midfielder; being a right-hander, he also played as a right-winger. Physical appearance (weight is 74 kg and height is 186 cm) helped Müller feel confident in any position.

Müller joined to the first team in 2007, and at once, he appeared in a Bundesliga match. The young football came on as a substitute at the end of games. In 2009, the forward scored the first goal in the UEFA Champions League and signed a contract with Bayern Munich.

In the next season, Thomas's club won the Bundesliga and the DFB-Pokal. Footballer scored the first hat-trick, several doubles and provided assists. The talented footballer was named the Bundesliga Young Breakthrough Player, and he extended the contract until 2014.

The 2010-2011 season was not successful in Müller’s sports career. Bayern Munich did not win a single title. As a result, Dutch coach Louis van Gaal, who noticed talented Thomas, left his post. In 2012, the club from Munich was a runner-up in the Bundesliga, the DFB-Pokal and the FIFA Champions League. Müller participated in almost all the matches of the tournaments. A year later, the footballer won three most significant awards.

In 2014, Müller extended the contract with Bayern Munich for another five years and said that he would like to retire, playing for this club.

According to Sports.ru, at the end of the season in 2015, Manchester United offered the German club € 70 million for a five-year contract with Thomas, and then increased the sum to € 120 million, while providing the player a salary of € 12.5 million per season. The result of the negotiations is known. Müller still played in a red and white striped shirt.

In the 2016-2017 season, the striker had a personal crisis. He almost stopped scoring. Coach Carlo Ancelotti did not know what position was better for the football player. The loan of James Rodríguez became a kind of signal. Müller slightly surpassed Manuel Neuer in the number of assists. Thomas admitted that he felt that he was useless. Specialists began to consider the possibility of the athlete’s transfer to England.

In the 2017-2018 season, despite a two-month absence due to a hip injury, Thomas scored eight goals in 29 games and provided 15 assists. The footballer seemed to take the advice of Giovane Elber to forget about the failures and to show a decent game.

Müller’s transfer fee in 2018 is € 60 million. According to the Bild newspaper, the owners of the British club were ready to pay € 100 million for the transfer of the German to Liverpool, but on conditions that they could sell Philippe Coutinho. Juventus, Chelsea, and Arsenal also wanted to get the player. However, Bayern did not want to sell the player.

Thomas Müller, the fourth player with such a name in the German national team, is a participant of the FIFA World Cup. The other namesakes are Hans-Peter, the silver medalist of the FIFA World Cup, Dieter, the record holder for the most goals scored by a player in a single Bundesliga match, and Gerd Müller, one of the best scorers in the world.

So, Thomas, who received an invitation to the national team in 2010, can look up to them. Müller the Fourth even got a number 13 T-shirt from Gerd. However, it was by accident. As a result of the injury, his colleague Michael Ballack was not able to participate in the 2010 World Cup in the Republic of South Africa.

This tournament was the first international event, where Thomas scored the first goal for his native team. Müller provided productive assists and scored goals in games against the national teams of Ghana, England, Argentina, and Uruguay. Perhaps the German national team could have won a better place on the podium that the third if the forward did not get two yellow cards. As a result, he spent on the bench a semi-final match against Spain. The national team, captained by the most titled German football player Bastian Schweinsteiger, became the bronze medalist of the World Cup.

Nevertheless, during the tournament, the talented forward was named twice as the best player of the match, became the youngest player after Pele, who managed to score five or more goals in one tournament. It is not surprising that Müller earned the Golden Boot. In his hometown of Pahl, authorities erected a monument. It is a boulder painted to look like a ball.

After 2010 FIFA World Cup, Müller organized a charity football match of Bayern in his native village. They could build a new gym in Pahl with the money raised.

At the UEFA European Championship, held at the stadiums of Ukraine and Poland, Thomas did not delight fans with good results, although the team successfully overcame the group stage. Germany was knocked out in the semi-finals of the UEFA Euro 2012.

In 2014, Müller won the main trophy of the FIFA World Cup, held in Brazil. It was already the fourth victory for the team at the FIFA World Cup. Thomas contributed to the excellent performance of Germany that did not suffer a single defeat during the tournament.

Thomas’s wife Lisa supports the man in everything. Their friends introduced Müller to the girl in 2007. But the young people soon lost each other and started chatting a year later on Facebook. In 2009, the footballer and the model married. There are no children in the family because they are developing the careers.

The sportsman finds time for charity. The Bayern player is an honorary ambassador of the Young Wings Foundation, which helps children who have lost relatives or friends and need psychological support.

Lisa is involved in professional horse riding. Thanks to her Thomas likes it too. The couple tries to hide their life from the public, but they give interviews with pleasure. Thus, fans found out that the footballer's wife sleeps in a number 25 T-shirt. It is Müller’s number in Bayern. Thomas said that he would not forget how he autographed a fan’s mobile phone, the first thing that came to his hand.

In his spare time, Müller watches TV, plays polo, or helps Lisa take care of the horses. According to the photos on Instagram, the football player has two dogs at home.

Football player's parents do not mind that their son married unusually early that is not typical for Europe. The mother believes that marriage, contracted before Thomas became famous, once again shows their true feelings.

In April 2018, Thomas scored a hat-trick in the game against Bayer 04, which secured the participation of Bayern in the final of the DFB-Pokal. The forward mentioned that the club deserved this victory, and he regarded the match as an advertisement for football in German. However, the final of the tournament ended with the defeat of the Munich club.

At the 2018 FIFA World Cup, the German team defends the World Cup title. Besides, Germany tops the FIFA and UEFA ratings. However, for the first time in 36 years, the team started the tournament with a defeat, the Mexico national football team spoilt the statistics. Müller said that the reason for the failure was that they gave the opponent too much freedom for action.

The German striker was one of those who disappointed fans at the beginning of the 2018 FIFA World Cup, along with Lionel Messi, who did not score a penalty, David De Gea, who did not catch a spinning ball, and Luis Suarez, who did not score three times five meters away from the goal post. 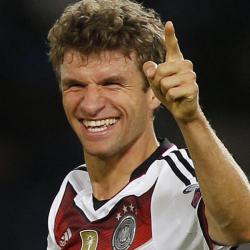