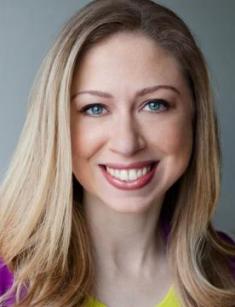 On January 27, 1980, a daughter named Chelsea Victoria was born into the family of the governor of Arkansas State. Her parents' names were Bill and Hillary Clinton. The biography of the little daughter of such a famous American family was destined for permanent press coverage. The girl grew up an obedient and hardworking child. She liked to learn. Meanwhile, Chelsea always remained friendly to people. At an early age, in addition to studying at school, Clinton Jr. mastered sewing and cooking basics.

At the age of 12, Chelsea and her family moved into the White House. Parents enrolled their daughter in the private school. Despite her status, Chelsea never stood out among her peers. She had many friends, and one day she decided to surprise the whole class. During her lectures on Islam, Chelsea invited all the guys to her home, where at that time was the head of the Moroccan Republic.

At the age of 17, Chelsea Clinton successfully entered the History Department of Stanford University. She completed her four years of study and received an undergraduate degree. To provide round-the-clock protection for the daughter of the president, she was assigned more than 20 bodyguards, and before she moved the dormitory, she had bulletproof glass inserted into her room.

At the beginning of her career, Chelsea managed to prove herself in public positions at the Avenue Capital hedge fund and McKinsey and Company. A few years later, Clinton decided to change her career and became a pediatric cardiologist. To do this, she studied at Columbia University's Mailman School of Public Health. She also began teaching there in 2012.

The press always covered Chelsea's life has been constantly covered by the media: from her childhood, during her father's presidential term, to the help of her mother in her political career, which she began with Bill Clinton's resignation. The daughter of Hillary Clinton worked at the mother's campaign headquarters both during her first campaign and during her second attempt to become president. Chelsea has always expressed her admiration for her mother and her potential.

While studying at Stanford University, the daughter of the Clinton couple was dating her classmate, Matthew Pierce. But in 1999, the couple broke up. It was only ten years later that Chelsea got married. Her choice was banker Marc Mezvinsky, whom she knew from the student days. The financier's father is a well-known U.S. politician, and for a long time was a representative in Congress from Iowa. Young people lived together for five years before they got married.

Although the husband adheres to the Jewish faith, Chelsea remains a member of the Methodist Church. The wedding, which took place on July 31, 2010, was held in two ceremonies. A Protestant pastor and a rabbi attended the ceremony. The couple chose Hudson Manor for the closed event. More than 500 guests attended the ceremony, including American stars Madeleine Albright, Oprah Winfrey, Steven Spielberg, and Barbra Streisand.

Chelsea's parents were delighted with such an important event in their daughter's life, as they had long dreamt of grandchildren. However, Chelsea was not in a hurry to give birth to children. Finally, the long-awaited event happened, and on September 2014, the first child and daughter Charlotte appeared in the family. Two years later, on June 18, 2016, Chelsea gave birth to a second child, a boy named Aidan. Their third child and second son was born on July 22, 2019. The grandparents, Hillary and Bill, are eager to help babysit, as you can see from their sparkling eyes and smiles in the photos of them together.

Chelsea Clinton has been friends with Donald Trump's oldest daughter, Ivanka, for over ten years. The girls have a small difference in age (now Chelsea is 39 years old, and Ivanka is 37) and height (Chelsea is 5'9''/175 cm, and Ivanka is 5'11''/180 cm). Both of them did not have a shining beauty in their youth, but over time, Ivanka became much more beautiful due to the work of plastic surgeons. Chelsea, on the other hand, remains true to her own style and keeps the appearance given by nature.

Both women are married to influential bankers, which brought them even closer together. Even the 2016 presidential campaign did not make them enemies, although for some time Chelsea and Ivanka had to interrupt communication. Today, friends continue to meet with their families for joyful family picnics.

Even though Chelsea's mother is a political opponent of Donald Trump, the woman supports the current president's family in many ways. On January 23, 2017, Chelsea spoke out on Facebook in support of ten-year-old Barron Trump, who was accused by many of being too sleepy at his father's official inauguration ceremony. Chelsea, as a pediatrician, rightly pointed out that every child has the right to express their feelings freely by age. But she did not miss the opportunity to criticize Trump's political steps. Her estimated net worth is $15 Million as of 2016.