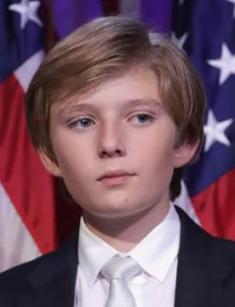 Young Barron is Donald Trump's only son from his third marriage with Melania Trump, a Slovenian model. Although his mother and father carefully protect the life of Barron from annoying reporters, his photos, as well as the pictures of the other members of the first family of America flash on the pages of different media publications. Since the quick development of the political career of the boy's father, the interest in the biography of Barron has increased rapidly.

Barron was born a year after the wedding of Melania and Donald, on March 20, 2006. Parents refused the services of hired nannies. Melania prepares his breakfast herself, helps him get ready for school, and meets him after classes. She is engaged with him in the evenings, and Donald is much more loyal to his son than his own father, an authoritarian and a tycoon, Fred Trump.

Trump believes that it is not necessary to limit the child in his hobbies and scold for the slightest fault. He is sure that he is bringing up a creative and mindful son.

Donald Trump's family is significant, and the members of it are surprisingly glued together, although all his children are born from different wives. The older sons, Donald Trump Jr. and Eric, work in the Corporation of the head of the family. Trump's daughter, Ivanka Trump, is also engaged in business and produces her line of jewelry. The girl is married to Jared Kushner and is friends with her younger half-sister from her father's second marriage – Tiffany Trump.

Barron himself is showing warm, family feelings to older brothers, sisters, and nephews. For example, during the solemn signing of the first documents by his father as President, the boy played with the younger half-year-old son of Ivanka, which caused discontent of the audience.

Until 2016 none of the journalists and media sources knew that the youngest son of Trump is ill. However, the behavior of the boy during the celebrations dedicated to the inauguration of his father to the office of President seemed disrespectful. One journalist even suggested that Barron has autism. That caused a storm of anger from the boy's parents and the public. Melania promised to sue the blogger, who first started a rumor about her son's autism.

The reason for such statements was the strange behavior of the son of Donald Trump at the time of the presidential speech after winning the elections. The boy desperately yawned and tried not to fall asleep (by the way, in New York then it was three o'clock in the morning). Another episode occurred at the inauguration: Barron rocked, smiled inappropriately and was rude to his mother. The media took that as a sign of sickness again.

However, this behavior can be attributed to fatigue and age of the child: how much can one expect from a ten-year-old boy, even if he was the son of the President.

Another conflict between the press and Melania Trump arose in August 2017. Appearing at Morristown airport in a t-shirt with a childish print, Barron aroused anger among several press representatives, vigilantly watching every step of the President and his family. The criticism was answered by Melania, who noted in her profile on Twitter that interference in the private life of any family is unacceptable. Chelsea Clinton, the daughter of the former United States President, Bill Clinton, also supported Trump's wife and wrote that a child could do as he pleased. Monica Lewinsky spoke in defense of Barron as well. The girl urged reporters to be kinder.

After this incident, Barron became less likely to cause criticism from journalists, although earlier the boy was accused of cheerlessness and stiffness. Trump Jr.'s favorite clothes are shorts, cropped jeans, and bright t-shirts. In school, Barron wears sneakers by the New Balance brand, the cost of which does not exceed $ 150. Barron wears business suits and ties in proper etiquette only on formal occasions.

Before his father's presidency, Barron studied at the Columbia Grammar & Preparatory School in Manhattan, New York. At one time, Herman Melville, the author of the novel Moby-Dick graduated from this school. Sarah Michelle Gellar also attended Barron's alma mater. Most of his free time the boy spent in the mansion of his father, Trump Tower, where he had a whole floor to himself.

In an interview, his mother noted that the boy was like his father in both appearance and character. He is just as stubborn, independent, and purposeful; it is impossible to convince him, so his mother even gave him the nickname "Little Donald."

Barron Trump has an official profile on Instagram, which was created in December 2016. Photos of the boy with his family and friends appear on his account.

In his spare time, Trump Jr. builds entire cities and skyscrapers in the gaming world. He quietly plays alone and likes to watch movies. His father is a little concerned about it. The President believes that in modern films, there is a lot of violence, aggressive scenes that are harmful to the psyche of the younger generation.

Unlike his father, who builds relationships with people that could be of use to him, Barron is friendly. First of all, after moving to Washington, the boy invited his school friends from New York to the White House. The party was fun, and the guys were allowed to stay overnight.

Even though Barron Trump’s net worth cannot be estimated yet because his primary occupation is being a kid, he already has shares of his father’s company. At the beginning of 2017, Barron was still living with his mother in his father's mansion, as the parents decided not to tire the child by moving to the White House before the end of the school year. However, in the summer Barron already settled in the White House and became the second boy after the son of John F. Kennedy to move in this building. Several rooms, as well as a swimming pool, a basketball court, and a home theater, were at Barron's disposal.

The boy changed school as well. Barron started attending St. Andrew's Episcopal School, the fee there is $40 000. Classes in this private institution are small and include only 10-15 people. Before Barron, Donald Trump's children respected the tradition of studying at the Sidwell Friends School. However, Trump went off the beaten track. The boy goes to school in a government car with security. Barron moves around the city separately from the car of his parents, which was noticed by journalists a couple of times.

Now the boy is fluent in Slovenian, his mother's native language, studies French, loves mathematics and Natural Sciences. His father believes that Barron is a future computer genius because he quickly gets the hang of any new program. The boy shares the love for playing golf with his father and often goes on the field together with Donald Trump.

Barron is fond of other sports too. He has a passion for baseball and tennis. The young man is a fan of Arsenal Football club. The boy himself likes to play football too. After an amateur game with the players of the American football club D.C. United, the boy joined the Junior football team and participated in 24 games for the 2017/2018 season.

Thanks to effective training, Trump Jr. is growing taller every day and will soon catch up with his parents' height. The boy's weight does not exceed the average: Barron is in good shape and health.