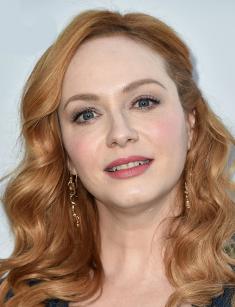 The red-haired and green-eyed Hollywood beauty Christina Hendricks is that well-known Joan Holloway from the popular TV drama series Mad Men which was included into the list of the greatest series of all times which received Emmy Awards four years in a row. The press and the audience are really impressed and call the actress the sexiest "chunk", and Christina prefers to call herself "the opposite of anorexia".

Christina's biography was destined to be connected with cinematography as the girl was born in Knoxville, which is in the State of Tennessee, in the homeland of the eminent director Quentin Tarantino. She was born in May of 1975. Her father Robert came from British Birmingham and was working in the United States Forest Service. Her other Jackie Sue is a psychologist.

When Christina was three years old, the family of Hendricks moved to Twin Falls, to the State of Idaho. Here the girl began to attend the school, and at the same time she visited theatrical and dancing studio. She spent her free time in the amateur theater as there weren’t any other entertainments in this small town.

Since the age of ten Christina, who is a natural blonde since birth, began to dye hair in bright red color being impressed with the novel Anne of Green Gables written by Lucy Montgomery. No doubt that she attracted public attention with such hair color.

Hendricks continued her education in the ninth grade already in the Fairfax High School in Virginia, as her father was transferred to Washington because of his work. By the words of the actress, at that time she was a shy, uncertain teenager who had complex concerning her appearance. Moreover, she was a fan of gothic subculture and correspondent attributes – violet hair, black lipstick, and gothic outfits.

The chance helped Christine to change her opinion about her appeal. Following the advice of her friends, the girl decided to take part in the photo contest for the glossy magazine. As Hendricks remembered, when she had seen her photos she burst into tears as she didn’t think that she was so beautiful.

And at the age of nineteen Christina went to New York with dreaming of conquering the podiums. The actress always remembered with pleasure about the nine years spent at the fashion shows and on the shootings. She appeared together with Pierce Brosnan in the VISA company commercial. Moreover, she took part in the shootings for the clothes catalogs and advertised jewelry.

Christina Hendricks received her first roles in the series. The actress performed the leading role in the movie Sorority; then she got episodic roles in the soap opera Undressed and in the spin-off of the series Buffy the Vampire Slayer under the title Angel with the participation of David Boreanaz. The actress began to be recognized after the series Beggars and Choosers and her character Saffron in the cult science-fiction western Firefly brought her popularity as well.

The actress also took part in the following popular projects - the medical drama ER featuring George Clooney and Julianna Margulies, the criminal thriller Cold Case with the participation of Tom Berry, the police officer series Without a Trace. However, the directors of these movies didn’t see the leading actress in Hendricks.

In 2003, Christina who has always distinguished with seductive plump forms played the leading role in the drama Hunger Point about the woman obsessed with the idea of losing weight. The audience considered this project nearly the only movie telling about anorexia and bulimia and disclosing the deep reasons for the diseases.

The movie draws attention to the important reason for anorexia — the belief that one can be loved only having a certain appearance. If the person looks different or doesn’t have achievements - he becomes unpleasant for people who surround him, and he isn't worth living a life in general. Such a position is shown by the mother's behavior when she forces her daughter to lose weight.

In 2007 the actress changed television for cinematography. Hendricks received positive feedback for her role in the independent movie La Cucina featuring Joaquim de Almeida. For a while, Christina appeared on the screen in the picture Life as We Know It. The actress played the colleague of the leading character who was performed by Adrien Brody in the drama Detachment.

Alongside these roles, Christina received the part of the member of the robbers' gang in the thriller Driver, one of the nominees for Academic Awards 2011. The movie was nominated for BAFTA Awards and American Association of Independent Cinematography, for Satellite Awards, the first prize of Cannes Film Festival and Golden Globe Awards.

Christina Hendricks played the leading role in the British drama Ginger & Rosa. This movie tells the story about two friends who were inseparable since childhood. One of them is brought up in the liberal family, has an active position in her life and is interested in the policy. Another one regularly visits the church, cares much about her appearance and considers love the most important thing in life. And suddenly it turns out that such seemingly right girl begins to have a love affair with her friend’s father.

Hendricks returned to the world of the fashion industry which was familiar to her. But then it was terrible and bloody world – she appeared in the image of the owner of the model agency in the horror movie The Neon Demon, the most discussed tape of 2016 according to the information of Metacritic.com website.

Along with the colorful visual row intensified by the topic of the model business, the spectators also noted the soundtrack to this movie. However, the public criticized the movie, as it was considered bright and beautiful but senseless. By the public opinion, the idea that the model industry swallows people wasn’t arranged in the plot which could capture the viewers’ attention.

Due to her character, an unofficial beauty queen from the advertising agency from the project Mad Men, in 2010 Christina Hendricks headed the Top of the sexiest women of the world by the opinion of Esquire magazine. The red-haired beauty left behind the Brazilian model Adriana Lima and her colleague Megan Fox.

In October of 2009, Christina married the actor Geoffrey Arend with whom they were working together in the series Body of Proof. Also, the spouses go to the gym together three times a week. The actress isn’t keen on her appearance, and in the interview, she says that she was born with such a figure and she became famous with such body and learned how to love herself. Though, sometimes she faces problems while choosing clothes.

Christina doesn’t like social networks and considers that they interfere with her personal life. The pages on Instagram and Facebook with the name of the actress aren’t verified.

In 2012 Christina's intimate photos were leaked on the web by the unknown person. Christina admitted that these photos weren't hers. Though, if to believe the information on the web, after this accident the girl filed a complaint with the police about the phone hacking.

As Hendricks confesses, she dreams to take part in Tim Burton’s movie.

In 2018 the actress returned to the series genre and played the major role in the first season of the comedy Good Girls. This series tells a funny story about three girls who decided to rob the local market because of the lack of money but were caught by the manager of the shop.

The same year there is expected the release of the horror movie The Strangers: Prey at Night with Christina in the leading role. The plot is focused on the ordinary American family who lost their house because of debt and has to live in the trailer park. But the park which used to be cozy has changed, and nobody cares about the neighbors. Moreover, the men in the masks are watching the family.

Besides, Matthew Weiner, the creator of the popular series Mad Men which brought world recognition to Hendricks, invited the actress to the new project under the title The Romanoffs about Russian history. The direction of Netflix channel is planning to release the movie about the people who claim to be descendants of the last Russian Emperor Nicholas II. 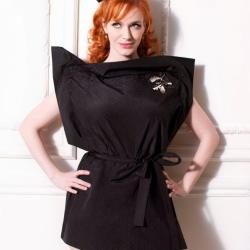