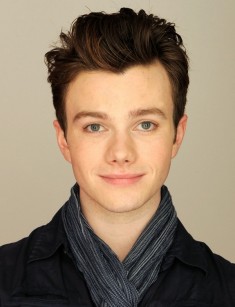 Christopher Paul "Chris" Colfer is known for his role in the series Glee, released in the USA and Canada in 2009. Chris portrayed Kurt Hammel, a homosexual with a beautiful countertenor voice.

Chris Colfer was born in Clovis, California. His date of birth is May 27, 1990. The parents, Karyn and Timothy, are of Irish descent. The Colfers raised two children: son Chris and daughter Hannah. The girl was born with epilepsy. Christopher said that his sister's attacks frightened him, so he often attended acting courses and wrote stories to take his mind off the problem.

The future actor attended the ordinary school for eight years. The boy was bullied so severely in middle school that his parents transferred him to Clovis East High School. In school, Chris showed a passion for writing, became the president of the writers' club, the editor of a magazine.

The vital point in Christopher’s biography was the period of a severe illness. For several months the boy was confined to a hospital bed after the lymph node removal. Colfer admitted that he avoided reality, reading fantastic fiction for a long time. At that time, he tried to write books. The grandmother supported Chris’s hobby, and in 2012 his first book of fairy tales The Land of Stories was published.

Chris dedicated the series of fairy tales to his grandmother. She was pleased with the successes of her grandson, although advised him to graduate from school before being an author.

In 2017, the book “Stranger Than Fanfiction” was published.

Chris Colfer appeared on the screen for the first time in the short movie Russel Fish: The Sausage and Eggs Incident. The 18-year-old actor got a leading role in the film, which later was shown at several film festivals.

The zenith of Colfer’s acting career was a role in the musical series Glee. There was no the character of Kurt Hummel (Chris) in the script. The producers were interested in the personality of the young man so much that instead of the role of Artie they created the character of Kurt specifically for him.

So a homosexual, Kurt Hummel, appeared in the script. The first season of the series tells how the teenager shaped the way he saw the world, the perception of his sexual orientation and about a complicated relationship with the father. In the second season, Hummel's storyline is based on his novel.

In 2011, Chris Colfer won the Golden Globe Award for Best Supporting Actor. The actor was also twice nominated for the Emmy Award.

In 2012, the tragic comedy Struck by Lightning (directed by Brian Dannelly) premiered at the Tribeca Film Festival. Chris Colfer played the role of Carson Phillips. The teenager is bullied at school and laughed at, but this does not affect him, and the boy attempts to change his life. Phillips shapes his bright future but dies after being struck by lightning.

In 2014, the actor got a role in the comedy Hot in Cleveland. Two years later, he appeared in the role of Christopher in the film Absolutely Fabulous: The Movie.

In 2017, Chris Colfer shared his plans to create a new project about indigo children. The storyline tells about disabled children (with mental and physical diseases) that have supernatural abilities.

Christopher Colfer often tells about his personal life in an interview. The actor has stated that he has a different sexual orientation. According to Chris, the family members respect his conscious choice. The actor faced misunderstanding in school, and his classmates severely bullied Chris.

In 2013, Chris announced that he had a relationship with Will Sherrod. However, there were rumors that he had close ties with his colleague on the set Darren Criss. Both actors denied the information.

It is not the first charity event where Colfer takes part. The actor is a member of Uprising of Love, a movement that supports lesbian, gay, bisexual and transgender people. The organization deals with their security issues and also protects their rights.

Chris Colfer actively campaigns for homeless animals, donates funds for their salvation. The actor has a cat and a dog from the animal shelter. In 2014, the actor of the series Glee wrote a message on his Twitter page with an appeal to help families who have a difficult financial situation. 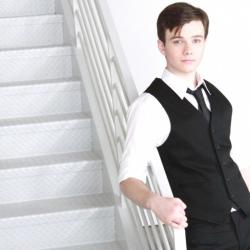