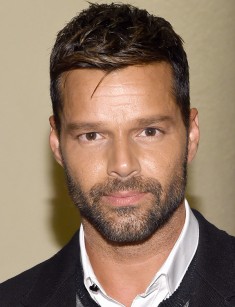 Ricky Martin, whose real name is Enrique Martín Morales, is a Puerto-Rican pop-singer, actor, and writer. As a singer, Ricky has become popular due to his participation in the teenage Menudo band. Having already become the adult he has contributed to the promotion of the Latin American music on the American and European market due to his hit Livin' La Vida Loca. Moreover, Martin has sung at World Cup in France where he has performed composition La Copa de la Vida after the final.

Ricky was born in San Juan, which is the capital of Puerto Rico. The singer's mother Nereida Morales worked as an accountant, and his father Enrique Martín Negroni was a psychologist by his profession. When the boy turned two, his parents have separated, and Martin interchangeably lived in his father's new family or at his paternal grandmother. Except for him, there were born a brother and a sister to his father's family, and in his mother's family, he has two more stepbrothers.

Since his childhood, Ricky Martin dreamed about the stage career. While his peers were kicking the ball or playing war, Ricky took a wooden spoon and imagined that it was a microphone. Having noticed his eldest son’s interest, his father has found the announcement of the audition on television in the newspaper and has brought Ricky there. The producers liked the boy, and already studying at primary school Martin has gained his first popularity due to the advertising of the tooth-paste, fast food, and sparkling water.

At the age of thirteen, the teenager was chosen to join Menudo youth pop band. Ricky turned out to be the youngest participant, and at first, the direction of the project rejected Ricky twice. Though the boy was persistent and continued to attend auditions, and at last, he has received the vacant position for his insistence. Being a part of this group the guy has visited all the countries of South America where the boys' band was trendy. Though by the year 1987 Menudo began to lose its popularity, and after four-year cooperation and eleven full-pledged albums, Ricky Martin has left the group.

The 17-year-old guy has made up his mind to try himself abroad. He left for the USA and entered Tish School of the Arts. But he hasn't managed to start his studies he began to receive exciting offers both from the Mexican theater and the recording studio.

Ricky Martin has taken both offers and has done his best in both spheres. In Mexico City, he has enthusiastically played in the musical Mama Ama el Rock. Here the movie producers have noticed him. As a result, Ricky started to take part in the television melodrama To Reach a Star in which he has performed in two seasons. A little bit later he appeared in the full-length version Even Closer to the Star. In this picture, he not only played the role but also sang as according to the plot he was one of the participants of Paper Dolls band.

Later Martin has taken part in the sitcom Getting By, in the medical drama General Hospital and the youth parody of the horror movie Idle Hands. The musical comedy Glee in which Ricky performed the role of David Martínez was the last film in which Martin participated.

The actor also remembered about the theatrical scene. In 1996 he acted the leading role in the play The Outcasts staged by Victor Hugo’s novel. In 2012 Ricky returned on Broadway and sang in Evita musical of Andrew Lloyd Webber.

Alongside with his acting career, Ricky began his solo musical career. He has concluded the contract with the Latin American department of Sony Music Entertainment. It’s noteworthy that he has signed the contract even without reading it. As a result, he received only one cent from each disc which was sold.

At that time Ricky didn't have much interest in his fees: he wanted to turn into the real star. His first album which he recorded in the Spanish language under the title Ricky Martin became golden not only in South America but the U.S. as well. And such hits as Fuego Contra Fuego and El Amor de Mi Vida have appeared in the radio world rotation. Later he has released not less successful discs - Me Amarás and A Medio Vivir.

With his latest album, Martin proved to his fans that he didn't intend to remain just the singer of dancing compositions. The third disc included the touching ballad Te Extraño, Te Olvido, Te Amo and philosophical song Maria. What about the latter song, the producers didn't recommend to add it in the final record, but the singer has made a point. Finally, Maria became a super-hit in the Southern and Northern America and what was surprising, even in the majority of European countries.

In 1998 the new Ricky’s album Vuelve was released. But the most significant achievement of that year was his performance with the song La Copa de la Vida at the final of the football world championship in France. Ricky Martin transformed his song into the anthem of the tournament. Besides, this hit became The Song of the Year in the opinion of the majority of world charts.

By that time Ricky Martin was far beyond being famous. He was the most famous Latin American celebrity, and it was difficult to expect something more ambitious from the singer. Anyway, the singer has again succeeded in surprising everybody. First, he has released the English-language version of the album Ricky Martin what was a kind of the novelty for the performers from South America at that time.

Second, he has released a single Livin' La Vida Loca which became a kind of his business card and is still demanded at present. This track was not just a dancing song. This song has changed Ricky Martin’s biography, and also it became a pass ticket to the English-language market for other Latin American musicians, such as Jennifer Lopez, Enrique Iglesias, and Shakira.

In 2000 Ricky Martin recorded the songs Nobody Wants to Be Lonely and Solo Quiero Amarte in a duet with Christina Aguilera. Later the musician would collaborate with Daddy Yankee, Meja, Madonna, Eros Ramazzotti, Fat Joe, Amery, Matt Pokora, Wisin&Yandel, and Pitbull.

Later Ricky Martine has released six more studio albums. The Life album of 2005 turned out to be the most successful of all. However, after this album, the performer has taken a break for a couple of years and left his creative career for some time. In 2011 Ricky Martin returned to the show business with the album Música + Alma + Sexo. Moreover, in 2011 the musician’s collection Greatest Hits came out. In 2015 he presented the disc A Quien Quiere Escuchar. His vivid composition La Mordidita was released as a single in 2015.

In general, it's worth noting the individuality and originality of Martin's music what is caused by the composition of modern dancing rhythms with classical national genres - salsa, merengue, and bolero.

In youth, Ricky Martin repeatedly told that he was meeting Mexican TV host Rebecca de Alba. It seemed that the young people were even going to get married and to become a family. But in 2005 it was announced that Ricky and Rebecca broke up after fourteen years of romantic relations. The couple had no children, but at present Ricky is a happy father.

Three years later Martin became the father of two twins - Matteo and Valentino born to the musician by a surrogate mother.

In 2010 Ricky Martin posted on his official website that he was a gay. By the words of the singer, long years of silence and keeping the truth him, and he considers it right to tell about his sexual orientation.

The same year during The Oprah Winfrey Show the singer has publicly announced that he had nonconventional orientation. In a short time, the musician has even presented his partner – the economist Carlos Gonzalez Abella. But the disclosure of this information didn’t bring any benefits to the couple, and four years later they separated. All the same, while the partners were together, they were thinking about the marriage. For the sake of the future husband Ricky Martin has even changed nationality to Spanish because after they had decided to marry, the lovers couldn't stay in Puerto Rico. The same-sex marriages are not permitted in this state. Subsequently, this has facilitated the musician's life already in his new relationship.

In 2016 Ricky Martin released a new single, and later there was published a video on the original composition under the title VentePa' Ca.

In 2016 the singer began meeting the Swedish-Syrian artist Jwan Yosef. The press learned about the men’s relationship in April 2016. In November of the same year, the lovers announced their engagement at Ellen DeGeneres's show. Moreover, Jwan regularly appeared on the singer’s Instagram. On his page, Ricky publishes photos from his everyday life. Ricky Martin has a verified account and has nine million subscribers.

The same year 2016 Ricky Martin gave an interview in which he explained his sexual orientation. The singer repeatedly called himself gay. Besides that, in Ricky's words, he feels restricted in the borders which create similar labels. Both men and women attract Ricky Martin. Though, the singer is interested in the romantic relations with the men only. Nevertheless, if Ricky finds a woman attractive, he can spend a night with her.

The same year 2016 the musician announced that he had become a vegetarian. His fans relate this decision to the fact that the singer was fond of Buddhist spiritual philosophy. Ricky has always been fond of sport. Ricky Martin is a great and skilled swimmer and a surfer. He has parachuted more than once, and recently he began to do yoga. To develop his yoga skills he even visited Thailand and India.

In December 2016 there appeared the rumors about the forthcoming wedding of Ricky Martin and Jwan Yosef. Men were noticed at secular events with same rings.

Happy bothers don't distract the singer from his creative career. In November 2017 there came out the trailer of the second season of the series American Crime Story - The Assassination of Gianni Versace, devoted to the murder of the designer Gianni Versace. In this series, Ricky Martin played the role of Versace's partner - Antonio D'Amico.

Also, Ricky devotes himself to the music. The singer, at last, held the concert which had been postponed because of the earthquakes. The performance took place at the Constitution Square in Mexico City. Hundred thousand spectators have attended the show. 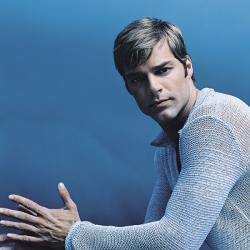