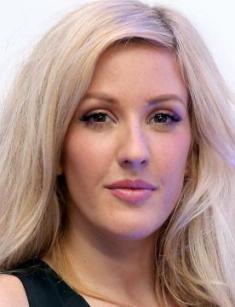 Ellie Goulding is an English singer and songwriter. She became the second artist to top the BBC's annual Sound of... poll and won the Critics' Choice Award at the Brit Awards in 2010. Elena Jane Goulding was born on December 30, 1986, in the South-East of England in the center of Hereford. The singer's father Arthur Goulding was a hereditary undertaker and her mother Tracey was a salesman.

Ellie`s childhood took place in an atmosphere of constant need. There was a lack of money, although her parents worked everywhere. It is known from the biography of the famous singer that Goulding was a real hooligan at school. The young rebel skipped classes and brought teachers to nervous breakdowns. Her mother sent her to a music school to play the clarinet to make her daughter more disciplined. The girl liked the imaginary world of sounds very much: the artist mastered the guitar on her own at the age of 14 and wrote her first song at the age of 15.

Ellie enrolled at Hereford College and then at the University of Kent, after receiving her high school diploma. Goulding had warm relations with her groupmates. Everyone was delighted with the charismatic beauty, who participated in all student concerts. However, teachers didn't believe that Elena would achieve something, considering her voice not expressive enough. Fate allowed the ambitious blonde to show herself in all her glory.

She tried to get a contract to record her debut album. Ellie moved to West London for that, where a representative of Polydor Records noticed her. In 2009, the artist signed a contract for the release of her first album. Goulding became the main favorite of British music critics after the release of the single "Under the Sheets."

The next song of the singer was "Starry Eyed." It is the most successful single of Goulding to date (it takes 4th in the UK chart and has more than 30 million views on YouTube). The album "Lights" was debuted at the top of the UK national chart, there were 37,000 copies of this album, which were sold in the first week in 2010.

The reissue of the album titled "Bright Lights" was released in November of the same year. The title single of this album was Elton John's legendary song "Your Song." The second studio album "Halcyon" on Polydor records was released on October 5, 2012. The title track of the album "Burn" took the leading position in the British hit parade of singles of the UK Singles Chart for three weeks. The work was named "Halcyon Days" with new nine songs. The album was released in 2013.

The first single of the disc "Delirium" was the song "On My Mind." The song was released in September 2015. The track received many positive reviews, reached the top 10 in Australia, Canada and the UK and took the 13th place in the Billboard Hot 100. The standard edition included the hit "Love Me Like You Do." The composition became the soundtrack to the movie Fifty Shades of Grey.

On July 30, 2017, Martin Garrix and David Guetta performed the single "So Far Away" at Tomorrowland Festival. This hit was recorded with the participation of Ellie Goulding and James Arthur. The date of the official premiere of the song is not known yet. Nowadays, Goulding prepares to release her fourth album, which, according to her, will be different from her other works.

The first boyfriend of the performer became Greg James, who is a DJ on BBC Radio 1. Young people met long before Ellie became famous. The guy loved her very much at the very beginning of their relationship. According to the memories of Goulding, Greg carried her. Their idyll ended over time. The young man began to find fault with his ideal beloved. James did not like her cooking, behavior and habits. He began to find fault with the appearance of Goulding.

She did not understand what was going on and she tried to reason with the guy for a month. She was tired of knocking on the closed door. She broke up with him officially in 2010. The performer wrote the song "Anything Could Happen" after their breakup. In early 2012, Goulding announced about the beginning of her new relationship. The world-famous musician Skrillex became the chosen of the singer. The couple broke up in six months, despite the complete coincidence of temperaments, preferences and life priorities. The reason for the breakup was the busy work schedule of both artists.

The charming blonde was had short relationships with the actor Jeremy Irvine, the singer Edward Sheeran and the vocalist of One Direction Niall Horan. There were also rumors of an affair of Ellie Goulding and Calvin Harris. The reason for the gossip was the video for the joint song "I Need Your Love." The artists appeared before the audience in the image of a couple in love, walking on the beach. This video was released in 2013.

In the spring of 2014, the performer of such hits as "Burn" and "Outside" visited the show of Alan Carr together with her friend, a member of the group McFly, Dougie Poynter. The host asked the charismatic young lady a question about her relationship with Dougie at the event. The audience was surprised. The singer did not hesitate. She said that she has not only friendly relations with Poynter. The couple stopped to hide their relationships after that. They appeared together in the movie theatres, starred in a candid photoshoot, they regularly posted joint photos on the social network.

In 2016, there was the information in the media that Goulding did not congratulate her lover on his birthday. Moreover, the couple was not together on the day of the celebration: Dougie was in Los Angeles and Ellie was on tour with her new album "Delirium." The British performer announced a week officially after the publication of the material that their relationship is over. Nowadays, the singer is in a relationship with a 24-year-old athlete Caspar Jopling.

The artist travels around the world, performs with her concert program at various festivals. Since 2017, the singer has visited “Granatos Live” in Lithuania, “the Global Citizen Festival” in Hamburg, “Untold Festival” in Romania, “Positivus Festival“ in Latvia, “Bravalla Festival“ in Sweden and “VOLT Festival“ in Hungary. The famous singer visited Moscow too. The concert, organized by MasterCard, took place in Luzhniki on July 22. Years & Years, Alma performed together with Goulding on the same stage.

Ellie Goulding has a net worth of $20 million.

The talented performer signed a contract with Deichmann SE in February this year. The artist recorded the song "Something in the Way You Move" as part of the advertising campaign "Ellie Goulding for Deichmann" and shot the video. Also, the singer of the song "Love Me like You Do" took part in a photo shoot, which was dedicated to the release of the shoe collection. She developed these sketches on her own.

The performer does not forget about the rest, despite her busy schedule. In July of this year, Ellie attended the Wimbledon Championships, the show Magic Mike Live in Las Vegas and a private party of Microsoft. She posted photos from the rest on her page on "Instagram." In addition to pictures of her free time, there are video clips of working moments (recording songs, backstage, meeting with fans after concerts) and photos from the gym there (Ellie became the face of the fitness application of Nike).