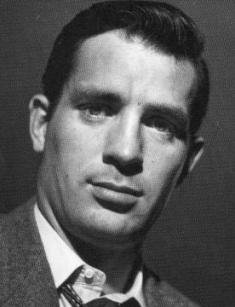 Jack Kerouac (Jean-Louis Kérouac) is an American writer, the founder of the beat movement, who became the most popular after the release of the novels On the Road and The Dharma Bums. Tom Robbins, Richard Brautigan, Hunter S. Thompson, Ken Kesey, William Gibson, Bob Dylan all got their inspiration from Kerouac's work.

Jack was born in the American city of Lowell, which is located in Massachusetts. The boy's parents Léo-Alcide Kéroack and Gabrielle-Ange Lévesque were of French-American-Breton origin, came to the United States from Quebec, Canada, adhered to the Catholic faith. His father ran a private printing office, enjoyed horse racing and socializing with friends at the bar, his mother worked in a factory and had a reputation of a domineering woman.

Jack became the third son in the family. As a child, the boy experienced the loss of his older brother Gerard, to whom he later dedicated the book Visions of Gerard. Following the example of his father, who published the newspaper Spotlight, Jack eventually established the production of his own sports newspaper, which was distributed among friends.

Kerouac Jr. grew up a sports boy; he was particularly fond of football. Participation in the games of the local football team allowed the young man to get a scholarship at Boston College and then Columbia University in New York. In high school, the young man became acquainted with Allen Ginsberg, Lucien Carr, Neal Cassady, and William S. Burroughs.

Gradually, Jack's views on life began to change. He always had quarrels with football coaches, and then he broke his leg. The young man was deprived of his scholarship, and in 1942, as a sophomore student, Kerouac went to serve in the Merchant Navy, and a year later, he became an officer in the U.S. Navy. The future writer did not have to participate in the Second World War. Kerouac refused to kill people, so he got a pass for psychological reasons.

In 1944, Jack returned to the University, where he consciously took up writing. Besides studying, Kerouac became a participant in Bohemian parties, where not only the creative plans of each of the friends were discussed, but also drugs and alcohol were used in an immoderate amount. Gradually in the circle of young writers, the concept of the hipster – the natural person whom they opposed the outlook of the American inhabitants, the scouts, relying on conformism and consumerism was formed.

Young writers led a free lifestyle, often got themselves in a fight. During one fight, Lucien Carr slaughtered David Kammerer. Kerouac and Burroughs helped their friend get rid of the evidence and almost went to jail themselves. To release the students, Burroughs was bailed out by relatives, and Jack was bailed out by the parents of a girl the writer was dating at the time. Subsequently, the friends would create a detective novel, And the Hippos Were Boiled in Their Tanks, which described the events of this case. But the book would be published only in 2008.

Friends often went sailing around the world. In addition to participating in parties, Kerouac began to search for teachings close to him in spirit. Kerouac found support in Buddhism, which he met after reading the creation of Dwight Goddard's A Buddhist Bible in the library of San Jose.

In the second half of the 40-s, Jack began working on the book The Town and The City, which went to print in 1950. The literary style of the work was close to that of Thomas Wolfe. His next work, the novel On the Road, recognized as "the Bible" of the Beat movement, would appear on the shelves only in 1957. The writer wrote the book in three weeks, being under the influence of Benzedrine and caffeine.

In the story, Kerouac described the events of his biography told by the protagonist Sal Paradise. In content, the book resembled a modern version of Adventures of Huckleberry Finn, the style of the narrative was close to a stream of consciousness.

Kerouac himself compared the book to a continuous flow of jazz improvisation. The writer even glued the manuscript into one long scroll, with a length of 36 meters. Only one publishing house decided to release the novel, Viking Press. Literary critics ambiguously interpreted Kerouac's work. Praising reviews appeared only in The New York Times. This did not prevent Kerouac from receiving the title of the King of the Beat Generation.

People suddenly started quoting the novel. Kerouac's friends learned the following phrases by heart 'You boys going to get somewhere, or just going? We didn't understand his question, and it was a damned good question.', 'Great things are not accomplished by those who yield to trends and fads and popular opinion.', 'All he needed was a wheel in his hand and four on the road.'

On the wave of success, Jack created the novels The Subterraneans and The Dharma Bums, the latter of which became some sequel to the cult book On the Road. In The Dharma Bums, Kerouac tried to present his vision of Buddhism, for which theorists of this religion criticized him. Jack took the negative reviews hard and abandoned the ideas of Buddhism.

In 1959 Kerouac published three more works written in the 50-s during his travels around the world. Doctor Sax, which describes visions of the vampire world, Maggie Cassidy, a novel about the first high-school love, and the poem Mexico City Blues.

The constant use of drugs and alcohol affected the writer's health, both physical and mental. Kerouac was haunted by despair and depression; he started having problems with the cardiovascular system and blood clotting.

In 1960, Kerouac's works Book of Dreams, Tristessa, Visions of Cody, "The Scripture of the Golden Eternity" and Lonesome Traveler were being prepared for release. A year later, the poem " My Daisy" went into print. In the mid-60s, Jack published Desolation Angels, Satori In Paris, Vanity of Duluoz. But these works did not bring back the author's popularity.

Many of the author's books saw the light of day only after Kerouac's death. In 1962, the novel Big Sur about the life of a man living on the Californian coast in a self-build hut, away from the temptations of civilization, was published. Unable to find harmony within himself, the character gives up and leaves for the city, where endless parties begin. The content was again autobiographical-Kerouac described his own experience of being in the bosom of nature, which he undertook in the summer of 1960 with a friend, the poet Lawrence Ferlinghetti.

In 2011, publishers decided to release one of Kerouac's first books, the 1942 novel The Sea Is My Brother. The author himself was not satisfied with the plot of the novel; that's why he never gave the manuscript to print.

Kerouac's name is also known in the cinema. In 2012, director Walter Salles shot a full-length movie On the Road, based on Kerouac's novel of the same name. The movie starred Sam Riley, Garrett Hedlund, Kristen Stewart, Kirsten Dunst, and Amy Adams. The movie premiered at the Cannes film festival and was nominated for the Palme d'Or in the category Best Director.

Jack Kerouac did not think much of traditional morality, so marriage was not his priority. Often the writer was accompanied by prostitutes. The writer is even said to have had homosexual affairs. Despite all this, Kerouac got married three times.

His first wife was Edie Parker, whose parents paid his bail in 1950. But after two months, the marriage was annulled.

The close one of the writer's friend, Bill Cannastra, who died in a subway accident, became Kerouac's wife. By the time of the wedding, the girl was already pregnant with Kerouac's child and soon gave birth to a daughter. Jack did not want to recognize the child as his own, and six months after the marriage, a separation followed.

The writer's third wife was Stella Sampas, with whom Kerouac formed a relationship in 1966. A year later, the young moved to the hometown of the writer, where they settled with Kerouac's mother. Jack was already very ill, but this did not prevent him from attempting to move to St. Petersburg in 1968.

In late October 1969, Jack Kerouac felt unwell. The writer was taken to St. Petersburg hospital, where he underwent a series of surgeries on blood vessels.

It took several sessions of blood transfusion, as the patient had extensive gastric bleeding. A day later, Kerouac fell into a coma and, without regaining consciousness, died on October 21. The funeral of the writer was held in Lowell.