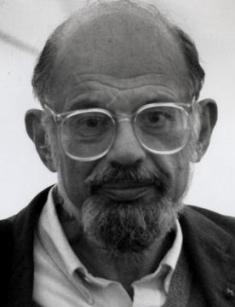 American poet Allen Ginsberg, along with his like-minded friends Jack Kerouac and William S. Burroughs is considered the founder of the Beat Generation. His works are distinguished by anarchic moods, freedom of thought, "sexual liberalism." The values celebrated in the poem by Ginsberg "Howl" in 1960-s gave way to the development of the counterculture of the United States.

Irwin Allen Ginsberg was born on June 3, 1926, in Newark, New Jersey. His father Louis Ginsberg, a Jew, taught philosophy and wrote poetry, and his mother, Naomi Livergant, worked as a school teacher. The family brought up two children — Irwin and his older brother Eugene (born in 1921).

The boys ' mother had a mental disorder that manifested itself in the form of paranoid delirium. Thus, Naomi claimed that the house was bugged. Probably, fear of political persecution developed because of frequent meetings with activists of the "Communist party" of the United States. Since he was seven years old, Irwin took part in them together with his mother. Later his memories were embodied in the poem "America" (1956).

Once Naomi tried to commit suicide, and she was placed in a mental institution. The "imprisonment" of the wife became a reason for divorce. In 1950, Louis found a new love in the face of bookseller Edith Cohen, with whom he lived for 26 years, until his death.

The experience of communicating with his unstable mother became a source of inspiration for Ginsberg in writing two main works: "Howl" (1956) and "Kaddish for Naomi Ginsberg (1894–1956)"

In 1943, Ginsberg graduated from East Side High School and entered Columbia University majoring in law. In the first year, Allen met a graduate student, future writer Lucien Carr, who introduced him to Kerouac and Burroughs. Young people became close because each of them was worried about the future of American youth.

Probably, Allen Ginsberg inherited his unstable psyche from his mother unstable, which led to a strange but critical episode in the biography of the poet. One day, while reading aloud the poetry of William Blake in his apartment, the young man heard a voice. First, Ginsberg claimed that God spoke to him, then — that it was Blake himself. This hallucination followed the poet a few days. Ginsberg took it as an instruction to become the voice of a new generation and began to compose the poem "Howl" — his best work.

Ginsberg's drug addiction helped him write his psychedelic but crucial work for the Beat Generation. He tried to use his drugged mind to bring back the voice of Blake. In 1949, the antisocial lifestyle led to an arrest for stealing a car. The prison term turned for Ginsberg into a compulsory treatment in a psychiatric clinic, where he met Carl Solomon — a man to whom "Howl" was dedicated.

"Howl" consists of three parts. In the first part, Ginsberg turns to drug users, prostitutes, representatives of the LGBT community and mentally disabled people. These people, who were considered scum of the earth, formed the beat generation in the 1950s and 1960s and strove to become a part of a free society. Ginsberg called them saints and in detail described their sexual experience and drug problems, which later became the reason for the prohibition of the poem.

The main image of the second part was Moloch, a deity to whom they sacrificed children. In the "Howl," Moloch is the society of the Cold War, which takes Ginsberg's Beat Generation as a sacrifice. The poet criticizes Americans for their thirst for money and violence while preaching freedom of speech, thought, and love of the Beat Generation.

The final part is a hymn to Carl Solomon, whose "soul is innocent and immortal, and it should not die obscenely in a high-security asylum." In the poem, Ginsberg told the story of a friend who suffered from clinical depression and wanted to commit suicide, but not in the usual way. One day Solomon came to a psychiatric hospital and asked to perform a lobotomy on him– the fate that befell Ginsberg's mother. The nurses refused, instead offering dozens of therapies from electroconvulsive therapy to imprisonment in a noiseless room.

In 1955, Ginsberg presented "Howl" for the first time to his peers at the Six Gallery Readings in San-Francisco. That day was reflected in the works of Jack Kerouac's The Dharma Bums. In the book, the audience met the readings of drunken Ginsberg with reassuring shouts and burst out in applause at the end of his performance. Six months after these events, Allen left a presumptuous quote in his diary – "I am the greatest American poet," and later added, "Let Jack Kerouac be the greatest."

In 1957, six months after the publication of "Howl," a batch of 520 copies was withdrawn from the printing house in London. At the same time, a man who sold the poem to a police officer was arrested in San Francisco, as well as the co-founder of the City Lights publishing house, Lawrence Ferlinghetti. They were charged with aiding and abetting the spread of the 'obscene' poem.

The trial, which restored the most fabulous book of the beat generation in the ranks of literary works, formed the basis of the film Howl (2010). James Franco played the role of Allen Ginsberg.

Immediately after the successful outcome of the trial, Ginsberg moved to Paris. Next to the poet was a lover Peter Orlovsky, as well as representatives of the Beat Generation Gregory Corso, William S. Burrows, and others. In this productive period, Ginsberg began writing an epic poem "Kaddish for Naomi Ginsberg (1894–1956)", Corso wrote "Bomb" and "Marriage," Burroughs combined Naked Lunch from previously written passages.

Ginsberg's main inspiration had always been the concept of "spontaneous prose" by Jack Kerouac, who argued that literature should come from the heart, without any known restrictions. The poetry of the American is a fusion of modernism, romanticism, jazz tunes, and Buddhism. The last feature is primarily observed in the collections Indian Journals (1970), written under the impression of traveling to India in 1962-1963.

The last work of Ginsberg's bibliography, published during his lifetime, was the poem Iron Horse (1973), which described the behavior of people on the train.

Allen Ginsberg realized that he was bisexual at a young age. His first love interest was Gregory Corso — poet and artist, one of the key representatives of the Beat Generation. Corso, who spent three years in prison for robbery, understood homosexuality, but he was straight, so the relationship between the young people did not work out. Corso and Ginsberg remained friends for years.

In 1954 in San Francisco, Ginsberg met Peter Orlovsky, a poet. During their first evening together, the men swore to each other in eternal love, which, however, didn't assume fidelity — both often changed partners. Orlovsky did not hesitate to spend time with women, whom he met through Ginsberg. Despite the "sexual freedom," the poets lived together for 43 years, until the death of Allen in 1997.

Ginsberg was in love with Lucien Carr, his guide to the world of literature. The film Kill Your Darlings (2013) even demonstrates the kiss of poets performed by Daniel Radcliffe and Dane DeHaan. In life, the relationship of men did not go so far: Carr was skeptical of same-sex relationships after stabbing an annoying fan David Kammerer in 1944.

There were women in Ginsberg's personal life too. Before meeting Orlovsky, he went out with Elise Cowen, a poet of the same generation. Thanks to her Ginsberg met the writer Carl Solomon.

In 1960, Ginsberg was treated for the tropical disease. It is assumed that the doctor used an unsterilized needle, and the poet got hepatitis. His immune system was permanently weakened. Smoking and drug addiction aggravated the state of health. Allen repeatedly tried to give up bad habits, but stress forced him to take up a cigarette and use drugs again.

In the 1970s, Ginsberg suffered two minor strokes, which led to Bell's paralysis. In his late photos, one can see that on one side of the man's face, the muscles look "sagged," atrophied.

In 1997, Allen Ginsberg once again and for the last time, returned from the hospital, where he was unsuccessfully treated for heart failure. For days on end, the poet called his friends, saying goodbye. Some telephone conversations, including with actor Johnny Depp, were very grave and were often interrupted by tears, with other comrades Ginsberg was joking in an old-fashioned way.

Ginsberg died on April 5, 1997, surrounded by family and friends. The cause of death was liver cancer, which had opened up from hepatitis. The body was cremated, and the remains were divided into equal parts. A third of the ashes were buried in the family graveyard in Newark, between the graves of his father and mother. The second part of the ashes was to be buried next to Peter Orlovsky after his death, which happened in 2010. The remaining third is buried in India.

I think even as time goes on, people will remember many of Bob Dylan's songs, as well as some of John Lennon's words. But almost all academic poetry will be forgotten.

We made a vow to each other that he could own me, my mind and everything I knew, and my body, and I could own him and all he knew and all his body; and that we would give each other ourselves, so that we possessed each other as property, to do everything we wanted to, sexually or intellectually, and in a sense explore each other until we reached the mystical “X” together, emerging two merged souls.

I'm glad to be still breathing.