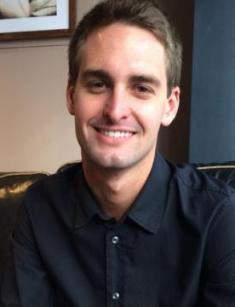 Evan Spiegel is a young American entrepreneur, who is called the youngest billionaire in the world. Evan is a co-founder and CEO of Snap Inc. that is engaged in the creation and promotion of Snapchat messenger. It is one of the most anticipated mobile applications of 2017.

Evan Thomas Spiegel was born in June 1990 in Los Angeles in a family of lawyers Melissa and John Spiegel, who managed to earn millions. The family lived in an expensive area of Pacific Palisades, which can be comparable with famous Beverly Hills.

His mother gave up a law practice and began to raise the heirs after the birth of three children. Young children grew up in incredible luxury. There were all the attributes of the life of the "Golden youth" in the life of the children: their yachts, tennis and golf clubs, luxury cars and personal chefs. Later, Evan Spiegel called his childhood "life in a bubble."

Evan Spiegel managed to get a good education. The teenager enrolled two courses of prestigious colleges, where he learned graphic design and began to understand the art at the age of 15.

The young man received a driver's license, as well as a gift from his parents, Cadillac Escalade, the closed parking of the company Southern California Edison, which was next to the place of Evan`s study. The father of the young man represented the interests of this company during the crisis and received this place.

John Spiegel took Evan to the Christmas distribution of dinners for the poor and homeless people every year to show his son how lucky he was in his life. Besides, the family of millionaires went to Mexico, where they helped to build a home for the poor people.

In the late 2000s, there was a difficult time for the family Spiegel. His parents divorced after 20 years of their marriage.

Evan Spiegel becomes a student of Stanford University, after graduating from high school. The father of the entrepreneur studied here. Evan joins the student fraternity in this prestigious institution, in which he becomes the main organizer of parties. The correspondence of Spiegel with classmates is preserved, where he continually swears and makes sexist jokes against women. In 2014, the entrepreneur made an official apology and said that he changed his views on this issue when this correspondence appeared in the press.

Evan could not decide what he should do for a long time. Spiegel worked as an intern in a company that was engaged in biomedicine. Then he decided that he would become a teacher and even went to South Africa to teach students the basics of management. But then Spiegel was interested in computer technology.

First, Evan practiced by the owner of the company Intuit, Scott Cook. Having gained the necessary experience, Evan launched his project. His business partners were his friends at Stanford University, Bobby Murphy and Reggie Brown. According to rumors, Reggie came up with the idea of creating an application for smartphone, which was called Picaboo. It is a messenger with disappearing pictures.

But Brown did not know how to program. Reggie was involved in marketing the project and obtaining a patent. Brown also came up with the app's logo, a smiling ghost.

The development of the project began in June 2011. And in August, Spiegel and Murphy kicked Brown out of the project. They even hired the law firm Cooley for that. In 2012, Brown filed a lawsuit and demanded a third of the business. Then the co-founders changed the name from Picaboo to Snapchat.

Soon, Snap Inc. becomes the antithesis of the social network of Mark Zuckerberg. The project develops continuously at the same time. You can send even a 15-second video through the application, in addition to disappearing photos. And you can make a 24-hour slide show of your day, which will go at midnight.

According to estimates, users send about 350 million photos each other every day. That's as much as the number of pictures, which are uploaded on Facebook and Instagram throughout the day. In autumn 2013, Mark Zuckerberg became interested in this service. The creator of Facebook offered Evan Spiegel $1 billion for Snapchat. But he refused. And he did not lose.

Later, the estimated cost of the company, in which there were five hundred employees, reached $18 billion. One hundred million people send messages through Snapchat every day. This application can send advertising. In 2015, the company's revenue was $60 million. According to Forbes, Evan Spiegel had a net worth of $2.1 billion at that period.

The guy remembers the lesson of his father, who tried to teach him with charity work. Although Evan Spiegel achieved everything on his own, the entrepreneur always understood that his career would never have developed in this way without the base like a cloudless childhood and a good education that was given to him by his parents.

Therefore, Spiegel rarely says clichéd phrases in interviews and conferences on questions about his biography. On the contrary, Evan declares openly that the world is unfair but he was lucky. A bright example of this position was a speech at a business conference at Stanford University, where the entrepreneur said directly that his success was related to the fact that he was "a young, white, educated man," recognizing gender and racial inequality.

A rich and successful young man was lucky in a romantic relationship. Evan always had the girls' attention. He had affairs with Taylor Swift and Kate Upton.

Evan Spiegel`s personal life always interested the audience but he had special attention after it was known about the romantic relationship with the former wife of Orlando Bloom, the model and actress Miranda Kerr. The 25-year-old billionaire began dating a 32-year-old beauty in the summer of 2015. And Miranda shared the good news of her engagement to Evan. The actress managed to marry the young rich man.

However, Kerr was not so happy when the representative of Spiegel brought the woman a marriage contract, under the terms of which Miranda will be left with nothing in the case of divorce.

At the end of May 2017, Evan Spiegel and Miranda Kerr got married. The wedding was held in Brentwood. There were 45 guests: relatives and close spouses at the wedding ceremony.

In November 2017, it was known that Evan Spiegel and Miranda Kerr expected their child. The couple did not deny these rumors and Miranda even put photos on "Instagram," which show the rounded belly of the future mother. It will be the second child for Kerr. But it will be the first child for Spiegel.

In November 2017, according to Forbes, Evan Spiegel had an estimated net worth of $3.1 billion. Evan Spiegel took 248th place in the annual list of 400 wealthiest people in the United States the same year.