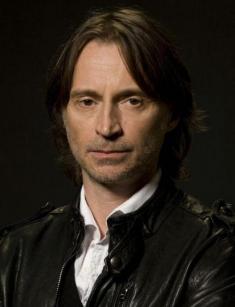 Critics praise this brilliant actor for his versatility, as he plays both the priest and the cannibal with equal artistry. And the female part of the audience considers the artist one of the most attractive stars, a real sex symbol, although he has neither the classic beauty of George Clooney nor the American gloss of Brad Pitt.

Robert Carlyle became a star after the release of film bestsellers Trainspotting, The Full Monty and The World Is Not Enough. But it took him a long time to get to Olympus. The man had a tough childhood and rough youth.

Robert Carlyle was born in April 1961, in the ancient area of the Scottish metropolis of Glasgow, Maryhill. The marriage of his parents, Elizabeth and Joseph, wasn't successful. Joseph was not adapted to the surrounding reality and was struggling from earnings to earnings. The family lived on the verge of poverty. Elizabeth could not stand such difficult life conditions and ran away from home, leaving a three-year Robbie Carlyle in the care of his father.

When the boy turned 7, Joseph joined the hippie commune. This friendly community wandered from city to city, occupying empty houses (the so-called squatting). For several years, the Carlyles were living in an abandoned house in Chelsea. And when they got kicked out, they spent a year and a half on a beach pier in Brighton, East Sussex, England.

Nevertheless, Robert Carlyle has warm memories about his childhood and adolescence, and his father always remained for him if not an idol, then those whom he imitated and thanks to whom he came into the cinema. After all, Joseph was a creative person. He not only drew well, making shop-windows and signs but also showed real artistry and turned into a chameleon when he needed to get a client. Robbie listened enthusiastically to his father when he began to talk about his adventures. He turned out to be a ready actor, who by the will of fate did not get on stage.

The desire to become an actor came to Robert Carlyle not in childhood, but later. At the age of 15, the boy left school and began earning money anywhere he could find the job. The first money earned and questionable friends turned Robbie into a troubled teenager. He was rapidly slipping into the abyss, but the death of a close friend from a drug overdose stopped Robert in time. He went to night school and discovered the world of books. Robert read avidly, and also he came on the theater stage for the first time.

Arthur Miller's pieces played a decisive role in Carlyle's wish to become an actor. Reading the works, Robert caught himself wanting to play all the characters.

If in his youth Robbie enthusiastically played on the Amateur stage. At the age of 22, Carlyle became involved in drama at the Glasgow Arts Centre. A year and a half later, he brilliantly passed the exams and became a student of the famous Royal Scottish Academy of Music and Drama.

In 1990, the future star of British cinema together with his colleague, Alexander Morton, founded a theater troupe, calling the band Raindog in honor of one of the albums of his favorite singer Tom Waits. Robbie wasn't just an actor in the troupe. He built scenery and even, remembering the lessons of his father, tried himself as a graphic designer.

The debut performance One Flew over the Cuckoo's Nest brought Carlyle recognition and victory in the competition of novice directors, which is held every year by the Royal Academy among its graduates.

The acting career of Robert Carlyle began in 1991. The debut of the artist in the film Riff Raff attracted the attention of directors and spectators. Rob played a construction worker so convincingly that many wondered at what construction site the director had found this actor. At the same time, no one believed that Carlyle was a graduate of the Scottish Royal Academy.

Brilliant transformation is a distinctive feature of the actor. But it is about not only the actor's talent but also a lot of work that was behind each role. Carlyle, preparing to play Adolf Hitler in the film Hitler: The Rise of Evil, spent many days listening to Wagner and watching the films of Leni Riefenstahl. Before performing a homeless man, Robert lived for some time in the village of Waterloo, where the shooting was planned, as a homeless man.

It was the same story with the movie SGU Stargate Universe where the actor played the role of a fanatic scientist. To get into the image, he attended lectures at the University of British Columbia for six months. Robert was so conscientious about each project that he even got the right to the appropriate category playing a bus driver.

The real fame came to the Scotsman after the film Riff Raff, Trainspotting and The Full Monty. For the last film, Robert Carlyle earned the BAFTA Award.

However, even the world popularity didn't force Robert to act in projects that he didn't like. He didn't make exceptions even for high-budget films. And today, Carlyle prefers only extraordinary projects, in which on first place comes acting and not props and special effects.

It was a great diversity of the roles he played, such as a gay priest, steelworker, sorcerer, tyrant, king, homeless, and cannibal.

In 2005, fans of the Scottish star saw his favorite actor in the role of a mafia and human trafficker, Sergei Karpovich, in the film Human Trafficking. For this brilliant work, Carlyle was nominated for the award of Outstanding supporting actor.

And in 2006, Robert first turned to fiction and starred as the sorcerer Durza in the film called Eragon. And the actor played this character as he felt. In the author's reading Carlyle's character moves little. Most of the emotions he conveys facial expressions and intonation. For a more realistic image, the actor was wearing his stage costume for days so that even the folds of clothing looked real.

Later, Robert appeared in the mini-series The Last Enemy opposite Benedict Cumberbatch, Anamaria Marinca, Max Beesley, and others.

Since 2011, the actor was playing one of the main characters in the fantasy series Once Upon a Time. The creators shoot seven seasons of the serial film because of high ratings of the project. Carlyle appeared in all the seasons. The idea to create a character's voice the actor got from his younger son, Pearce. Robert appeared as a dark wizard named Rumplestiltskin. In the story, no one could know the real name of the magician. Otherwise, he could ask him any wish.

Originally, Rumple was an ordinary farmer, quiet and calm, who lived with his wife and beloved son, and after a series of events turned into a cunning and insidious magician. However, his feelings to the Princess, Belle, who for the sake of the father's Kingdom voluntarily became a servant of the Dark, turned the man's life. The actress Emilie de Ravin played the role of the magician's beloved.

Gradually, the audience opened the veil of Rumple's secrecy. The audience understood why he was like this. And the couple Rumple-Belle got many fans.

In 2014, Robert first tried his hand as a director. He produced a full-length film called the Legend of Barney Thomson, which was created in the genre of black comedy. The lead role of the barber Barney, who became a serial killer, Carlyle left for himself. Such actors as Emma Thompson, Ray Winstone, and Tom Courtenay starred in the film. The premiere took place in the summer of 2015 at the Edinburgh film festival and had great success.

In the spring of 2016 in Scotland, the actor returned to the image of psychopath Francis Begbie. This role in the cult film Trainspotting brought Carlisle world fame 20 years ago. And in 2016, producers decided to make a sequel, which came out under the name T2: Trainspotting.

In 1994, the artist met a charming make-up artist, Anastasia Shirley, on the set of the film Cracker. It was love at first sight and forever. Since then, Robert Carlyle's personal life is connected only with this woman.

In January 1997, the couple got married. The couple had three children, two sons, Harvey and Pearce Joseph, and a daughter Ava. The family lives in the hometown of the star actor, Glasgow.

Robert is a fan of the Scottish football club Rangers F.C.

In 2006, his beloved father passed away. Then, Carlyle stopped public activity for some time and left the film True North, in which he had the lead role.

Thousands of fans follow the actor on Twitter, where he regularly posts tweets. Once Rob admitted in his blog that before starting the acting career he dreamed to become a football player.

Fans of the celebrity created a fan profile on Instagram, where they post photos of their favorite star found on the Internet.

In January 2017, the film T2: Trainspotting was released. In this part, Robert's character appeared in a different light. Now the spectators saw that Francis Begbie could experience other emotions and not only rage.

Critics warmly received the sequel, and Robert Carlyle hinted in an interview at the release of the third part of the film. Although some noted that the picture was not as beautiful as the first part, the sequel has the same frenzied energy, which was noted earlier in the previous movie.

The mini-series The War of the Worlds is planned to be released in December 2018. The artist is involved in the project in one of the lead roles. The series is focused on the story of the growing horror that overtakes society after the invasion of aliens. Robert Carlyle will appear in the image of Ogilvy, a scientist and astronomer. The actor starred opposite Rafe Spall, Eleanor Tomlinson, and Rupert Graves.