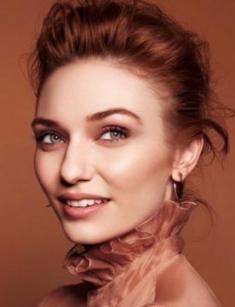 Young British actress Eleanor Tomlinson, when choosing a career, followed in the footsteps of her parents, famous actors in their motherland. However, she quickly became popular outside British cinema. In her tender adolescence, she made her debut in a big movie. It was the movie The Illusionist starring Edward Norton. Since then, her filmography is expanding with Hollywood movies, and the popularity is steadily growing with each new role.

Eleanor Tomlinson was born on May 19, 1992, in London, UK. Her father, Malcolm Tomlinson, is an actor and horse racing commentator. The mother, Judith Hibbert, is an actress and singer. The couple had a son Ross at first, and then Eleanor was born.

Children from an early age were immersed in the actor's environment. They were always surrounded by friends of their parents, who took them to the theater and on the set.

"Well, Mom and Dad are both actors, and I've spent a lot of time watching my mom on stage and a lot of time on set with my dad, so it was very much a part of my growing up," says Eleanor about the career choice.

The parents tried to talk the children out of it, warning them of the difficulties of the profession, but Eleanor was standing on her own, and she was lucky. The talented girl, who was a pupil of Beverly High School, was invited to the TV project called Falling, where she played Little Daphne.

The debut was a success and was the beginning of the career of 13-year-old Eleanor. A year later, she received a proposal from Hollywood, which was the leading role in the film by Neil Burger The Illusionist. The plot is focused on the life and adventures of the brilliant illusionist Eisenheim (portrayed by Edward Norton) and takes place in Austria in the XIX century. Eleanor played the protagonist's beloved, Duchess Sophie, in her youth. Jessica Biel played the role of adult Sophie.

Then, as if trying to catch up, Eleanor took an active part in teenage and youth cinema. In 2008, she worked on the teen comedy Angus, Thongs and Perfect Snogging. She also played in the teenage sci-fi series The Sarah Jane Adventures in 2009, portraying a character named Eve.

The theme of the childhood the actress continued with the role of Fiona Chataway in the fantasy movie of the American cult director Tim Burton Alice in Wonderland. The director himself said that despite the identical title, his movie is not a retelling, continuation or remake, but a rethinking of the works of Lewis Carroll.

Filming was a real treat for young Tomlinson. She was in the company of megapopular Hollywood stars such as Johnny Depp, Anne Hathaway, Stephen Fry, Alan Rickman, Helena Bonham Carter and others. The big premiere took place in February-March 2010 and brought Eleanor and other young actors worldwide popularity.

However, the actress had appeared neither on big nor small screens for almost three years. She took a short break to have a rest and outline the next steps. And now in 2013, five projects with her participation were released at once.

The biggest one is the fantasy action movie Jack the Giant Slayer. The actress played the role of Princess Isabelle, who is in love with Jack (portrayed by Nicholas Hoult), a son of an ordinary farmer. But before he reunited with his beloved, he would have to conquer the fairytale giants who attacked the country. The movie was a great success and gathered at the box office just under $200 million.

The rest of the projects came out on a small screen. For the first time, the actress starred in a historical movie. The series The White Queen is about the period when England was involved in The Wars of the Roses. Tomlinson played an aristocrat Isabel Neville, Duchess of Clarence, the older sister of Anna Neville, wife of the sorrowful English King Richard III.

It was an excellent gift for fans of the work Pride and Prejudice was a 3-part project called Death Comes to Pemberley, which is an extension of the story told by Jane Austen. In this drama, Eleanor got the role of the younger sister of Mr. Darcy, Georgiana. The actress starred in the last season of the iconic British series Agatha Christie's Poirot that had been on the screens since 1989. Eleanor played Alice Cunningham, working on the same set with Maestro David Suchet. In 2014, the artist made her debut in the horror genre. The movie The Curse of Styria Tomlinson played a major role in is a story about vampire women. The movie was shown at many themed festivals and received good reviews, including those of leading actors.

Since 2015, Eleanor appeared a big long-playing project, Poldark series. The name of the project is the name of the main character. British officer Ross Poldark (played by Aidan Turner), who returns home from the war, finds out that Elizabeth, his longtime love, is engaged to his cousin. In his desperation, he rescued and sheltered a poor girl named Demelza (portrayed by Eleanor Tomlinson), who later becomes his wife. However, his heart still belongs to Elizabeth.

The actress admitted that Demelza set the bar pretty high. She was glad that she accepted the challenge, even though the original producers saw her in the role of Elizabeth. She felt like she'd played such a balanced role before, so she worked hard to change her appearance and auditioned in her brother's clothes without brushing her hair for a couple of days... And it worked, the actress laughs and admits in an interview.

As a true Taurus on the zodiac sign, Eleanor is determined to achieve her goal. And she is rapidly moving towards her dream of becoming an outstanding actress. One of her current projects is the movie Colette. There Tomlinson plays with her stellar compatriot Keira Knightley. The permanent star of the Pirates of the Caribbean portrays the writer Gabrielle Colette, whose talent is used by her husband, who pretended to be the author of her works. In an attempt to escape to creative freedom Colette has an affair with Georgie Raoul-Duval, played by Tomlinson.

Being totally busy at work, she has no time for her personal life. It is only known that Eleanor had a relationship with stuntman Ben Atkinson. The couple met from the beginning of 2015 to June 2017.

Journalists are charmed by a charming actress. In everyday life, she walks without make-up and with rattled hair, dressed in simple jeans and a T-shirt. The woman is a natural blonde, but she dyes her hair red because she thinks that red is a better match for Demelza from Poldark.

The actress is lying, saying that she ignores social networks. At least the British actress's Instagram is regularly updated with photos. On many of them, she is with her brother Ross, who also became an actor.

Eleanor has a net worth of $3 million.

Now, in addition to her leading role in the series Poldark, Eleanor is busy with the project The War of the Worlds, it is still in production and may be released in 2019. The actress plays the role of Amy.