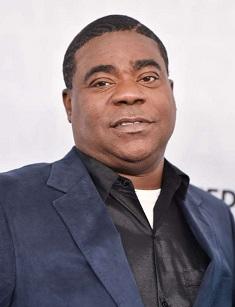 Tracy Jamel Morgan is known as one of the most successful comedians. He was born in the Bronx in 1968. Starring for seven seasons on NBC’s Emmy and Golden Globe Award-winning 30 Rock, Morgan appeared opposite Tina Fey, and Alec Baldwin as “Tracy Jordan”, the unpredictable star of Lemon’s (Fey) hit variety show, TGS with Tracy Jordan. He can currently be seen in the second season of the TBS show “The Last OG” which he stars in and executive produces.

Also, he is the participant of Paramount’s What Men Want with Taraji P. Henson which was released in January 2019. Morgan’s stand up special Staying Alive was released globally on Netflix in May 2017. Morgan is the owner of the Hollywood Walk of Fame star since 2016. He has four children. The Bronx native’s net worth is rumored to be around $18 million.

Tracy was born on November 10, 1968. His birthplace is the Bronx. He was the second child in the family of a housewife and a musician. Tracy’s father, Jimmy Morgan, served in Vietnam as the American soldier during the Second Indochina War. Returned home, Jimmy battled with heroin addiction and later AIDS. He named the son Tracy after his friend, who accompanied Jimmy in Vietnam and died in several days. Tracy fled a troubled relationship with his mother, but life with his father didn’t make him happier.

At the age of six, Tracy stayed with his mother when the father left the family. When he walked out, it devastated all of the members of the family, but Tracy took it the hardest. That’s why he is funny. It is a defense mechanism. Then Tracy became like any other inner-city kid with a chip on his shoulder because his daddy and his mommy weren’t together. However, his father taught Tracy to fish and play football. Tracy studied in the local school, called DeWitt Clinton High School, where he was a bullying victim.

In 1985 Tracy found out about his father’s illness – AIDS. In 1987 he was forced to drop high school to care for his father. The high school was a place where Tracy found his first love, Sabina. And they married in 1987. The same year his father died.

Sabina gave birth to their first son Tracy Jr in 1986. And as Tracy was brought up in a low-income neighborhood, surrounded by drug dealers and borough’s gangs, after his father’s death, he turned to deal crack. It was a way of survival when he was 19. He was not successful in it. And later, to supplement the family’s welfare income Tracy started doing comedy on the streets. Shortly before that, his friend was killed outside. He advised Tracy to do comedy a week before his death.

Tracy Morgan’s career started from an appearance on TV show Martin. He played the role of Hustle Man, the neighborhood purveyor of questionable products and services "at a discount rate! I don't do that for err body! I'm just tryna help YOU out!" Time after time, he greeted Martin (Martin Lawrence) with his trademark "What's happenin', chief?" In one episode, one of Hustle Man's more outrageous items for sale was an “appetizing” array of roasted pigeons impaled on a tree branch (as if barbecued on it), which he attempted to sell to Martin and his friends while they were snowed in and starving.

In another episode, he served as Martin's cut-rate "wedding planner", armed with a shopping cart brimming with plastic flowers, chitlin loaf, and a 40-ounce bottle of malt liquor—Martin's retaliation for Gina's choice of a more elegant and ridiculously overpriced wedding planner. In 2003 Tracy filmed in Head of State, where he was playing a man, who watched TV and questioned why they are not watching Martin.

Continuing his comedian career, Tracy was one of the members of Uptown Comedy Club. It was a sketch-comedy show, which was shown in 1992-1994. From 1996 up to 2003, Tracy Morgan was a cast member of SNL. In 2003 he started his own show, but it didn’t become popular. After one season the show was canceled for low ratings. In 2006 Tracy took part in TV series 30 Rock. He was playing his caricature, named Tracy Jordan. It was so successful that Tracy was one of the main starts of 30 Rock. He appeared in serial until 2013. And in 2009 he got a nomination at the 61st Primetime Emmy Awards. He fought for the title of Outstanding Supporting Actor in a Comedy Series but lost Jon Cryer. Also, the same year, Tracy published a book, memoir, I Am the New Black, where he describes his rough childhood and his road to success as an actor and a comedian.

Tracy has a lot of movie’s roles. Also, he is behind the voice actor. Morgan performed as a comic in different locations, such as Turning Stone Resort Casino Showroom, Kennedy Center, Gold Country Casino and others. In 2018, Tracy became the cast member of TBS TV series The Last O.G.

In 1996 Morgan started to film in the popular TV sketch-comedy show Saturday Night Live (SNL), one of the longest-running shows in television history. He spent seven years there, honing a variety of characters meant to make people laugh. And in 2003 opened his show “The Tracy Morgan Show”.

It existed for only one year, not achieved wide recognition. In 2009 he returned and repeated his well-known roles. In 2011, 2015 Tracy made some guest visits and appeared as cameo of various celebrities. In 2016 Morgan chose to make his return to the screen after an accident in a big way, hosting an episode of SNL as Brian Fellows from Safari Planet.

In 1987 Tracy married his school love, Sabina, who gave birth to their first son in 1986. Their relationships lasted for 23 years. They became the parents thrice: in 1986 they welcomed their first son Tracy Jr, in 1987 – second son Malcolm, in 1991 – third son Gitrid. The spouses divorced in 2009. Before their divorce in 2009, Sabina filed for divorced in January 2008 after his alcohol became too much too handle, he begged her for another chance even though they had been separated for eight years.

Although divorces are always ugly and they went through rough times together, Sabina and her ex-husband have a good relationship. The second wife of Tracy is Megan Wollover. She worked as a model at that time. They started dating in 2011 and married in 2015. They have one daughter Maven, born in 2013.

Recently, Tracy Morgan riffed on the alleged attack suffered by actor Jussie Smollett which supposedly occurred in downtown Chicago, at 2 a.m., during one of the winter’s coldest weeks. Morgan found the idea laughable that two white men were allegedly carrying bleach and a noose was prowling around Chicago during one of the coldest days of the year just looking for a gay black man to beat up. On the Jimmy Fallon show he joked:

“First of all, racist people don’t be jumping nobody in the polar vortex. It’s too cold. You can be racist in the spring.”

The 30 Rock episodes included several problems of Tracy’s real life. In 1996 he knew that has diabetes. Later he suffered from alcohol addiction, and it became the reason for his divorce. These problems led to the transplantation of the kidney in 2010. Since that time, Tracy started to take his diabetes seriously.

Tracy got critically injured in a car crash in New Jersey on June 7, 2014. He was returning from the engagement with his team when a Walmart truck hit into their van. James McNair, a close friend of Tracy, died. Morgan was taken to the hospital with a lot of severe injuries. He was almost near death. After two weeks in a hospital, he was moved to rehab. Only on July 12, Tracy was released, however, continued his rehabilitation still in November. Moreover, he needed a wheelchair.

His first appearance after accidence was on June 1, 2015. Tracy gave an interview to Today, where he told about problems with his memory, headaches, speech problems and others. Morgan visited Emmy Awards in September and even hosted an episode of SNL after an accident in October. While he was in the hospital, there was a lot of news with people’s support. Especially, there were popular to set up a list of the best Morgan’s sketches on SNL. Some of them are Tracy Morgan as Maya Angelou and as Brian Fellows. At the same time, he sued Walmart and its driver. As a result, he reached a $90 million settlement with Walmart. So, his net worth after accident increased.

Recently Morgan was involved in a car accident with his brand new $2 million 2012 Bugatti Veyron — an accident that took place days before the fifth anniversary of the severe crash with Walmart truck. In a crowded midtown Manhattan, a woman in a late-model Honda CR-V tried to make a right turn from the left lane and smacked into Morgan's new luxury car. After crash, Morgan tweeted that he was not injured:

"Thanks for any concern, but I am totally fine. My NEW CAR? We shall see. Love you all."