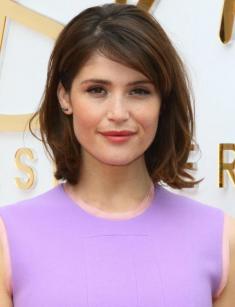 Gemma Arterton is a British actress, who is known for both films in her native country and Hollywood blockbusters. Gemma appeared in the film Quantum of Solace, performed the main female roles in the films Prince of Persia: The Sands of Time, Byzantium, Hansel & Gretel: Witch Hunters and others.

Gemma Christina Arterton was born in a poor English family. Her mother made a living, cleaning rooms and houses and her father was a welder.

When Gemma was born on February 2, 1986, the doctors were surprised to find that the newborn had six fingers and strange shape of ears. Fortunately for the girl, the UK's leading surgeons eliminated these shortcomings in childhood. The defect resembles a tattoo behind her ear, under which she hides her small scars.

Gemma Arterton did not look different from the other girls at school. She dressed poorly because there was not enough money for anything. Her studies were not exciting but she was happy to go to acting classes at school.

Gemma wanted to become a famous actress but her parents were unenthusiastic about her desire, they did not believe in her daughter's talent. When Arterton was sixteen, she left school to go to college. However, she studied there not long. Gemma managed to study at the Royal Academy of Dramatic Art. She left college without regret.

In 2007, she completed her studies successfully and entered independent adult life. Her life away from her family was difficult. Gemma had to find a part-time job to pay for a rented apartment and eat. She worked as a seller in the shop.

The creative biography of the actress began during her studies. Gemma Arterton received her first role in the movie when she was in her last year of the Academy. It was a work in the television drama Capturing Mary.

In 2007, the girl was approved for the role of Kelly in the comedy St. Trinian's Kelly from the film St. Trinian's in her performance was funny and flighty. Her next TV work was in a comedy Three and Out. Both movies had success so that the film St Trinian's 2: The Legend of Fritton's Gold was released. After filming in these films, Gemma Arterton risked a lifetime to remain a comedy actress, but fate decreed otherwise.

She found out about the casting for the film Quantum of Solace accidentally and went there. There were more than 1,500 pretenders for the role in the new adventures of James Bond. Gemma managed to star in this film. The actress jokes that the casting managers could not resist her beauty. Gemma played a British intelligence agent brilliantly and companion of Bond, Strawberry Fields in the movie Quantum of Solace. After the release of the movie in 2008, Arterton woke up famous.

Guy Ritchie invited Gemma to shoot in the film RocknRolla the same year. Then she had the main role in the serial film Tess of the d'Urbervilles: A Pure Woman Faithfully Presented. In 2009, the actress played in several other films, including the blockbuster Clash of the Titans.

In 2010, the actress played in the blockbuster Prince of Persia: The Sands of Time, where she played the role of Princess Tamina. The actress visited Moscow as a part of the promotional tour of the film together with the actor Jake Gyllenhaal in the main role. The plot of the film and the characters are based on a series of popular computer and console games, released by Ubisoft.

In 2013, the actress played a main female role in the fantasy action movie Hansel & Gretel: Witch Hunters. Gemma played the role of Gretel, who grew up a girl from a classic German fairy tale, who came to the witch's house together with her brother.

The film's prologue is different from the tale many details: children find out that they are immune to magic and do not return home after the death of witches. The main action of the film takes place when brother and sister grow up and become professional witch hunters. Jeremy Renner played the role of Hansel in the movie.

Also, in 2013, Gemma Arterton played a main role in the fantasy thriller Byzantium. The heroine of the actress is a vampire Clara, who is sentenced to death by the vampire brotherhood and hides from other vampires with her daughter.

Gemma Arterton's filmography has expanded considerably over the past five years. She played in the movies Tamara Drewe, Vabank, The Wedding Pact and others. The actress was supposed to play Catherine Earnshaw in the film adaptation of the novel Wuthering Heights but then abandoned this role.

Bright and charismatic Gemma is surrounded by a crowd of fans but she did not start a serious relationship. In 2007, the actress met with the animator John Nolan and lived with him for a little over a year.

Her next relationship started on the set of Quantum of Solace. Gemma Arterton's boyfriend was Daniel Craig but their relationship soon ended.

Quantum of Solace gave Gemma not only a bad relationship. The press began to discuss the appearance of the actress because of the popularity of the film, condemning the fact that the girl gained weight, as journalists later found out, Gemma had complexes about her weight. The actress has normal parameters: her height is 5,5 feet (170 cm), her weight is 132 lbs (60 kg) and some fans even believe that the girl began to look more feminine and attractive at the same time.

Despite the complexes, the actress continues to put her photos on "Instagram" regularly.

The actress met with a riding coach Eduardo on the set of the film Prince of Persia: The Sands of Time. They dated for a few months but then Gemma ended their relationship.

Then there was a series of fleeting affairs. But in June 2012, the actress married Stefano Catelli secretly. Her chosen one worked as a sales manager. They lived almost three years in their marriage, it was known recently about their divorce.

Gemma Arterton lives in London. She likes to dance and sing, plays guitar, communicates with friends in her free time. She is sure that she had not played her main role.

In 2016, Gemma Arterton played the main role of the teacher Helen Justineau in the zombie film The Girl with All the Gifts. The post-apocalyptic thriller differs from other zombie movies with a nontrivial ending and a new look at zombies. The emphasis in the film The Girl with All the Gifts is not on the fight of survivors with hordes of zombies but on trying to understand the causes of infection. Gemma Arterton has a net worth of $13 million.

Besides, the film features children, who were born to infected mothers. The heroine of Gemma Arterton teaches such children, who are were at the military research base. Scientists use such reasonable zombies for experiments to identify the virus and create the vaccine. Children, who are not at the base, begin to build their civilization.

The actress played a main role in the film-play National Theatre Live: Saint Joan the same year. The drama is based on a classic play of Bernard Shaw. Gemma played the role of the famous French heroine Jeanne d'Arc, the legendary village girl, who became a commander, brought victory to the French army. Her attitudes turned out to be dangerous for the traditional ways of feudal France and of the canons of the Catholic Church after the war.

In 2017, a four-part animated film Watership Down was released, in which Gemma Arterton voiced the heroine named Clover. The channel "BBC" will show the series in the UK and the cartoon will be available on the service "Netflix" for the rest of the world.