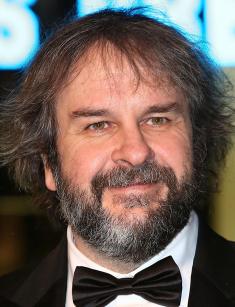 Sir Peter Robert Jackson is a director and producer from New Zealand; he created The Lord of the Rings and Hobbit movie trilogies that grossed $3 billion each.

Peter was born on October 31, 1961, in Wellington; the family moved to Pukerua Bay soon. The boy’s father, William, participated in the Second World War and protected Malta; worked as a civil servant; the mother, Joan, kept the house. The family settled in New Zealand in the 1950s: they came from England.

Peter took an interest in photography in his childhood; he started shooting small performances for dolls and used his video camera Super 8 given by friends for his eighth birthday. In addition to fantastic plots, Jackson paid much attention to special effects. The boy invented his own way to show explosions: he just pierced the piece of the film. Sinbad and animated King Kong were the first childhood movies by Peter.

In 1977, when the young man graduated from school, he got hired in a local newspaper’s printing house. Peter had no opportunity to receive professional training and did shooting for fun. In 1979, the young director purchased a 16 mm camera, and the speed of work increased. Four years later, Jackson began to create a fantastic horror about a man trapped by cannibals.

Throughout the next four years, the project turned into a full-fledged story about the main character’s meeting with aliens. Jackson was working without a ready storyline and involved friends and even parents to his activities. The director had no money to finish the thriller Bad Taste and asked the New Zealand Film Commission for financial support.

As long as the executive director Jim Booth saw the movie, he decided to assist the young talent and got the necessary money. In 1987, a small company Wingnut Films was founded, and Peter Jackson debuted as a director. Critics from the Cannes and Rome Film Festivals approved of the movie.

In 1994, Jackson changed the direction of his art: horrifying pictures of human flesh torn apart were replaced by psychological thrillers. New Zealand was shocked by the story about two school friends who murdered the mother of one of them. Peter Jackson presented his own interpretation of what happened; the movie Heavenly Creatures received the Grand Prize at the Festival international du film fantastique de Gérardmer. Kate Winslet debuted in this project.

In 1996, the new movie by the New Zealand experimenter came out: The Frighteners with Michael J. Fox. The project budget was $30 million; however, it failed because of the wrong target audience assessment. Still, critics welcomed the work of the WETA studio professionals who created the special effects.

The same year, Jackson’s childhood dream came true: he began to shoot the full-length movie about King Kong. He stopped for a while because similar movies, Mighty Joe Young and Godzilla, were released.

At the end of the century, Jackson drew his attention to The Lord of the Rings that influenced his career to a large extent. When the director got the sole rights for the screen adaptation of John Tolkien’s books, he signed a contract with Miramax. Producers rejected the idea of the two-movie saga, so he switched to New Line Cinema. The company administration was more liberal and gave Jackson the chance to do anything. Thus, the man started filing in his home country.

It took only 450 days to complete the filming for the whole project: the director used the material for the next three years and presented a movie annually. Overall, the trilogy brought its creators $3 billion and 17 Academy Awards. Elijah Wood, Ian McKellen, Liv Tyler, Viggo Mortensen, Sean Astin, Cate Blanchett, Orlando Bloom, Christopher Lee, and Hugo Weaving played the main characters.

By the end of 2005, Jackson completed the remake of 1993 King Kong. Universal paid the director the $20 million in advance. The movie turned out to be bulky and full of visual effects; experts gave it three Academy Awards, though. At that time, Peter Jackson topped the list of the most influential cinematographers according to Premiere.

In 2008, Peter showed the new Red Onе digital equipment potential and created a short movie about the First World War Crossing the Line. The next year, he presented the fantastic drama The Lovely Bones about a girl who was murdered by a maniac and became a ghost.

Following the lengthy negotiations with New Line Cinema, Peter Jackson began to work on the new trilogy, Hobbit, in 2011. It was the prequel of the Oscar-winning The Lord of the Rings. The saga proved to be a commercial success; each part grossed $1 billion. Many Tolkien’s fans expected the director to adapt to the screen another popular book, The Silmarillion. However, the man explained the rights to the novel belonged to the writer’s successors who were not interested in its movie version.

In the mid-1980s, Peter Jackson met a scriptwriter Fran Walsh; they married soon. The woman works with her husband as a producer; the spouses collaborated on all significant projects. Fran helped Peter solve organizational issues related to WingNut Films, Weta Workshop, and Weta Digital

In 1995, the couple’s first child, the son Billy, was born. The next year, the happy parents welcomed the daughter Katie. The director’s kids appeared in some episodes of their father’s movies.

The same year, the WW1 documentary movie They Shall Not Grow Old came out.