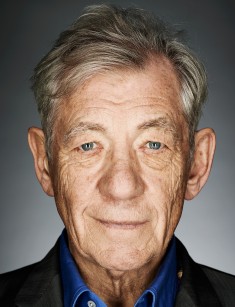 Sir Ian Murray McKellen is a British actor known for the roles of the magician Gandalf in the film series The Lord of the Rings and The Hobbit and Magneto in the superhero film series X-Men. But his compatriots associate McKellen primarily with the dramatic and comedy roles in the famous plays of the genius of English literature William Shakespeare.

Ian was born in Burnley, Lancashire. The boy's father, Denis Murray McKellen, was a civil engineer, but he served as a lay preacher like all his ancestors. The mother, Margery Lois Sutcliffe, was a housewife and brought up her son and eldest daughter Jean. Ian’s sister also devoted her life to the stage as an actress and manager of an amateur theater.

Two years later, the family moved to Wigan. Soon the Second World War broke out. By the age of four, little Ian used to fall asleep to the sound of bombing, thus, he has kept calm and composure for the rest of his life. McKellen had to sleep under a metal table, which served as the protection in case of an air bombing. Later, Ian said that "only after peace resumed ... did I realize that war wasn't normal."

When the boy was 12 years old, his mother died. The father married Gladys McKellen, who became one of the closest friends for the stepson.

The future actor studied at Boys' Division of Bolton School after his father was relocated to this town. There McKellen began to participate in performances, and he already learned to play professionally in Cambridge. Ian made his debut as an adult actor in the tragedy Henry IV, and he managed to participate in all William Shakespeare’s plays during a short period of time, playing on the stage of the Royal National Theater and the Royal Shakespeare Company.

Ian McKellen was invited to shooting in the late 1960's. He participated in many Shakespeare film adaptations and in military historical movies like the epic film Alfred the Great. Later, the actor began to play in films of other genres such as the adventure film The Scarlet Pimpernel, the melodrama Plenty, the thriller Windmills of the Gods.

Ian became famous outside the UK in the 1990's thanks to roles in Hollywood blockbusters. He starred together with Arnold Schwarzenegger in the action film The Last Action Hero, with Rachel Weisz in the melodrama Swept from the Sea, with Alan Rickman in the historical film Rasputin, where he played the Russian Emperor Nicholas II. The thriller Apt Pupil is worth mentioning among the projects of that period as well as the post-war drama Gods and Monsters, for which the actor was nominated for the Oscar and Golden Globe Awards for Best Actor.

Ian McKellen’s big breakthrough came already in the XXI century. At first, he played the role of the supervillain Magneto in the screen version of the comic book X-Men and soon appeared as the magician Gandalf in John Tolkien's epic film The Lord of the Rings, directed by Peter Jackson. Later, the actor got the same role in the prequel The Hobbit.

The atmosphere during the shooting of the fantasy film was incredibly friendly. The nine actors who played the members of the Fellowship of the Ring got Elven tattoos for the number 9. This sign can be found on the shoulders of Ian, Elijah Wood, Orlando Bloom, Sean Bean, Viggo Mortensen and other actors.

Ian got a Screen Actors Guild Award for the role of Gandalf. In addition, he was nominated for the Oscar and BAFTA.

In addition to these famous movies, McKellen participated in the creation of the mystical detective Neverwas, the action film The Prisoner, one more continuation of the story about the famous detective Mr. Holmes.

The actor does not refuse from working on TV. In 2013, he appeared in the sitcom Vicious. The plot tells about an elderly couple of gays. The men lived together for half a century, but they did not get bored with each other and did not stop loving.

Ian voiced heroes in the films The Golden Compass, Stardust, Doctor Who.

When Ian McKellen was a teenager he realized that he did not like women. Officially, the actor announced that he belonged to sexual minorities in 1988. Later, he admitted that he regretted that he did not dare to make this public announcement earlier since he stopped hiding the secret, he freed himself and achieved much more success as a professional. Ian McKellen is the first homosexual to be knighted.

The actor’s first partner was the teacher of history from Bolton, Bryan Taylor. Their love affair began in 1964 and lasted 8 years. Later, Ian had a relationship, and then he lived together with the British director, Sean Matias. They met at the Edinburgh Festival and were together for 10 years. They broke up after Sean began to be too jealous of the success of his partner, whose career was on the rise.

However, the former lovers kept friendly relations. In 2009, Sean invited Ian to play in Waiting for Godot.

There were rumors about McKellen’s love affair with his best friend Patrick Stewart. The reason for such a gossip was the meeting of friends at an event dedicated to Mr. Holmes London premiere. When they approached each other, the men hugged tightly and kissed.

However, Patrick married singer Sunny Ozell in 2013. The marriage ceremony was held by Ian McKellen.

Nowadays, the actor openly communicates with journalists, and he is ready to talk on various topics, but he reluctantly talks about his personal life, because it affects the interests of other people.

In the late 1980’s of the XX century, Ian almost refrained from meat, but he did not become a vegetarian. Although since childhood McKellen grew up in a religious atmosphere, later, the actor became an atheist.

In addition to his brilliant acting career, Sir Ian McKellen is a doctor of philology in Cambridge.

In 2006, he was diagnosed with prostate cancer, but a few years later the actor wrote in the blog that there was nothing to worry about.

Ian McKellen actively expresses his position and fights for the rights of sexual and gender minorities. He initiated an open letter to Russian President Vladimir Putin with an appeal to repeal the law banning homosexual propaganda and called Moscow Mayor Sergei Sobyanin a "coward" for refusing to hold a gay pride parade in Moscow.

Despite his age, Ian McKellen is an active user of social networks. The actor has a verified page on Instagram, where he shares his personal photos with fans and behind the scenes photos. The actor pleases subscribers with messages on Twitter.

Ian McKellen's filmography is rich in films of different genres.

In 2017, Ian played in a musical fairy tale Beauty and the Beast, where he appeared in front of the audience in the character of Cogsworth, the butler who is transformed into a clock.

Ian’s fans dreamed of seeing their favorite actor as the wizard, Dumbledore, in the Harry Potter franchise. But Michael Gambon was approved for the role after the death of Richard Harris.

In 2017 McKellen admitted that he was offered to play the legendary director of Hogwarts, but he refused. The reason was that Ian could not accept the role after Harris did not approve of him. It turns out that one day Harris said of McKellen that he had the brilliant acting skills but lacked passion.

The same year, he voiced one of the heroes of the cartoon Animal Crackers and was a narrator in the short film Edmund the Magnificent.

Then biographical movie about the actor McKellen: Playing the Part was released.

In March 2018 it became known that the actor was approved for the main role in the thriller The Good Liar. The film talks about the elderly swindler Roy Courtney (Ian McKellen). He meets widow Betty McLeish on the Internet. Roy must charm the woman and hoodwink her. But things get complicated when Courtney realizes that he has feelings for Betty. Then it turns into a dangerous game.

Actress Helen Mirren got the role of the widow. Bill Condon has become the director. It is noteworthy that McKellen doesn’t work with this director for the first time. They have collaborated in the movies Beauty and the Beast, Mr. Holmes and Gods and Monsters.

There are rumors that the actor will appear in the drama Untitled Noel Coward Biopic.

The comedy The Curse of The Buxom Strumpet by Matthew Butler-Hart with McKellen in the lead role is in the production phase. 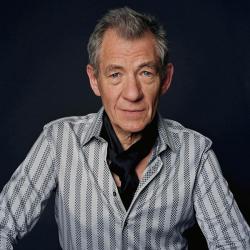