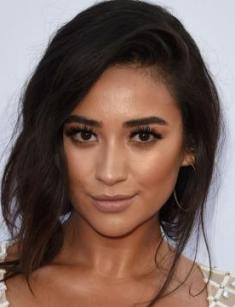 The Canadian actress with Asian appearance, Shay Mitchell, became first famous in the modeling business. The woman was tired of the camera flashes and the endless striving for looking better in photographs, she transferred to acting and gained real success after playing in the popular TV series Pretty Little Liars. The actress brilliantly portrayed homosexual Emily Fields, who has won the hearts of millions of viewers for seven seasons and opened Shay the path to glory.

Shannon Ashley Garcia Mitchell was born April 10, 1987, in Mississauga, Canada. Her father Mark Mitchell is of Scottish and Irish descent, the mother, Precious Garcia, is Filipina, a native of Luzon. The actress’s parents have careers in the financial industry. Besides Shannon, they have a son, Sean.

Shannon began to show her creative skills and desire from an early age. At the age of five, she told her parents that she wanted to sing and dance like her cousin Lea Salonga, a singer and theater actress. The mother enrolled her daughter in a dance school, where the girl began to make progress and win inter-school competitions. By the way, she is a big fan of Jennifer Lopez, aka J. Lo, so her friends called her "Shay Lohe", and then she became Shay.

When she was ten years old, the Mitchell family moved to Vancouver. There she made her debut in the modeling business. An international modeling agency held a casting and chose Shay. Soon the girl signed her first advertising contracts.

Child models do not always become famous beautiful men and women. As for Shay, when she grew up, she had become a real Miss Exotica. The slender, tall (5.61 ft. (171 cm)) brunette with olive skin and almond-shaped eyes went abroad to hold a contract immediately after graduating from West Vancouver Secondary School.

The girl gained modeling experience in Hong Kong, Thailand, Spain, after which she returned to Canada, deciding to make a childhood dream come true and become an actress. Shay entered the acting school in Toronto and began a career in the film industry.

Having signed a contract with the first agency, Mitchell began to land bit walk-on parts. She made her debut in the teen TV series Degrassi: The Next Generation. In fact, the young woman played herself because her heroine is a model in one of the episodes. She got a similar role in the short film Verona.

In 2010, the girl landed a role in the Disney TV series Aaron Stone about the adventures of superhero kids. Shay played cheerleader Irina Webber for four episodes in one season.

The same year, Mitchell was lucky when the novice actress was cast in the leading role in the new series Pretty Little Liars. However, Shay’s heroine, Emily Fields, is a person of non-standard sexual orientation. But Mitchell was not embarrassed. She began to work with pleasure on the project.

Shay’s heroine is the most emotional girl. She is obedient and strives for perfection, but suddenly realizes that she does not like guys at all. Emily understands it after meeting with her neighbor Maya. They begin a relationship, but the former boyfriend soon kills Maya. Emily is looking for new love and finds it in a completely unexpected way.

Almost 3 million viewers have watched the TV show. The teen series with a non-trivial plot, in which detective, thriller, and melodrama are intricately intertwined, attracted people’s attention for seven years, although only ten episodes were initially planned to be released.

While watching the series, fans lived the life of their favorite characters and were very upset when in 2017 the producers announced the end of the project. Needless to say that Shay has become a familiar face for the army of lesbian fans.

“I still get letters from girls who are trying to make up mind to their homosexuality and say that Emily helps them not to be so lonely. I can't describe what that means to me!” The actress admits.

The success of the TV series made Mitchell a star. Since 2010, the actress has been periodically invited to various shows as a star guest: Punk'd, Project Runway, Live! With Kelly and Michael, Shay Mitchell: Chapters. The young woman poses for fashion magazines; she often wears a bikini, showing her tempting body.

In 2016, the actress starred in two full-length films. She played a small role in Robert Schwartzman’s directorial debut, the film Dreamland. The movie was released in a limited release and went unnoticed.

But in the second film, Mitchell first worked on the set with Hollywood stars. Julia Roberts, Jennifer Aniston, and Kate Hudson portrayed the title characters in Mother's Day. The story focuses on Sandy (Aniston), whose husband left the family and married young Tina (Shay Mitchell). Now their children spend a lot of time with the forward-minded stepmother, and Sandy doesn't like it at all.

In 2018, Mitchell’s filmography included the leading role, for the first time. She starred in the chilling horror movie The Possession of Hannah Grace. The actress’s heroine is a young pathologist, Megan, who, after getting treatment for depression, first goes on night duty at the morgue, and strange things happen there.

After a role in Pretty Little Liars, Shay Mitchell had to answer questions about her sexual orientation and personal life more than once. The actress said that she did not want to stick labels on herself, and any good person could become her girlfriend or boyfriend.

There were rumors about a romantic relationship between Shay and her colleague in Pretty Little Liars, actress Sasha Pieterse. But reporters found out the name of her real boyfriend, TV host and music reporter Matte Babel.

On January 1, 2019, the celebrity reported on Instagram that she had a miscarriage in 2018.

In 2018, Shay Mitchell began acting in the crime series You. She played Peach Salinger, a close friend of the protagonist, beginning writer Guinevere Beck, with whom Joe Goldberg falls in love. Soon this love turns into obsession. Nowadays, the series is broadcast on Lifetime.

Shay Mitchell has a net worth of $6 million.