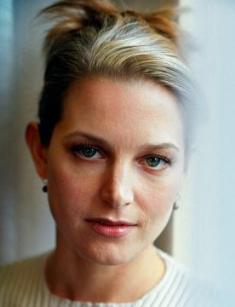 Bridget Jane Fonda is an American actress, a granddaughter of actor Henry Fonda, a niece of screen star Jane Fonda. She gained worldwide recognition after playing the leading role in the action movie Point of No Return. Bridget was born on January 27, 1964, in Los Angeles, California. At that time, the girl's father, Peter Fonda, began his acting career, and in 1969 he became famous for the participation in the cult movie Easy Rider. Her mother, Susan Jane Brewer, is an artist. The girl was named Bridget after the father’s first beloved woman, Bridget Hayward, who committed suicide.

The daughter of Peter and Susan was born with congenital heart disease, and the baby needed immediate medical attention. Bridget has a brother, Justin, who is two years older than his sister. Peter Fonda led a riotous life and did not pay attention to the family needs. But thanks to her father’s contacts in the film industry, she had close relationships with Hollywood stars Jack Nicholson and Dennis Hopper at an early age.

In 1974, Susan filed for divorce, being tired of her husband's parties. After leaving the family, Peter did not see his children for a long time. Bridget and Justin moved with their mother to Montana. Soon, Peter married Portia Rebecca Crockett, and Susan started a new relationship too. The sister and brother were left to their own devices.

Bridget studied in Westlake School for Girls, where she enrolled in a drama club. The girl appeared as nurse Kelly in the school production of Harvey. After graduating from college in 1984, Bridget entered New York University to study acting. However, the young woman transferred to the Lee Strasberg Theatre Institute, seeing the biased attitude of the teachers, who treated the representative of the Fonda dynasty with indulgence.

Bridget began her acting career in 1969 when the five-year-old girl played with her father in the film Easy Rider. Her second bit part was only in the 1982 comedy Partners.

In 1990, the third part of the crime drama The Godfather directed by Francis Ford Coppola, in which Bridget played the role of a journalist, was released. In 1991, Bridget landed the leading role in the drama Out of the Rain. However, the actress gained recognition after filming in Barbet Schroeder's thriller Single White Female, also featuring her friend, Jennifer Jason Leigh.

In 1994, Bridget Fonda joined the main cast of Alan Parker's comedy The Road to Wellville, alongside Anthony Hopkins and Matthew Broderick. The same year, Andrew Bergman's melodrama It Could Happen to You was released, in which Bridget portrayed a modest waitress, Yvonne, who got half of the multimillion lottery winnings of police officer Charlie Lang (Nicolas Cage) as a tip.

One year later, Fonda portrayed the wife of an influential senator (Russell Crowe) in the drama Rough Magic. In 1997, the actress appeared in the TV series In the Gloaming, playing the heroine, Anne, after which she was nominated for the Primetime Emmy Award for Outstanding Supporting Actress in a Miniseries or a Movie. The same year, the actress got acquainted with Quentin Tarantino, who created heroine Melanie specifically for Bridget Fonda in his film Jackie Brown. The crime thriller of the cult director grossed $72 million worldwide.

In 1998, the psychological thriller Break Up about domestic violence was released, in which Bridget Fonda and Kiefer Sutherland portrayed a married couple who had relationship problems. In 1999, the actress's filmography included the horror film Lake Placid, in which Bridget played paleontologist Kelly who investigated the terrible murder of an official in a small American town.

In 2001, Fonda starred in the TV series No Ordinary Baby, for which she received a Golden Globe nomination. The same year, she portrayed the heroine, Jessica Kamen, in the action movie Kiss of the Dragon. Then the actress began work on the latest film project, the TV movie Snow Queen, based on the story The Snow Queen by Hans Christian Andersen. In 2003, the family TV series was nominated for the Saturn Award for Best Single Television Presentation.

In 1986, Bridget Fonda began dating actor Eric Stoltz, the ex-boyfriend of the actress and girlfriend, Jennifer Jason Leigh. The love affair did not last long, and soon the lovers broke up. In the early 2000s, Bridget Fonda met composer Danny Elfman, whom she married in late November 2003. After the wedding, the actress has never starred in movies or appeared on television. In 2005, the couple had a son, Oliver.

The husband of the actress is a fairly well-known musician. Danny Elfman has worked on about 100 Hollywood blockbusters. The composer scored such films as The Simpsons (1989), Men in Black (1997), Charlie and the Chocolate Factory (2005), Dallas Buyers Club (2013), Alice Through the Looking Glass (2016).

Nowadays, Bridget Fonda’s personal life is a closed book. During her acting career, the granddaughter of Henry Fonda tried not to attract too much attention. So, she easily gave up her job, entirely devoting herself to the family.

Bridget Fonda has an estimated net worth of $10 million.