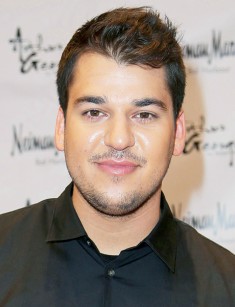 The only male member of the Kardashian family who participates in the reality show, the former model, and the businessman Rob Kardashian is famous for his scandalous behavior, especially in his personal life.

In 2017, he went to the court with his ex-girlfriend, the dancer and model Blac Chyna who sued the man after he publicly insulted her on his social network pages.

Robert Arthur Kardashian was born on March 17, 1987, in Los Angeles, California. The boy was the only and long-awaited son of the famous media persona Kris Jenner and the ethnic Armenian, the lawyer Robert Kardashian who died of esophageal cancer in 2003.

In his early childhood, Rob and his elder sisters, Khloé, Kourtney, and Kim, lived in Los Angeles, in their parents’ mansion. In 1991, soon after the boy was born, the Robert and Kris divorced. The mother married the famous decathlete and TV star Bruce Jenner (nowadays Caitlyn Jenner: the transition occurred in 2015).

Rob had three half-brothers and one half-sister: Burt Jenner, Brandon, Brody, and Cassie (the step-father’s children). Bruce and Kris gave birth to two children: Kendall and Kylie; they are Rob’s half-sisters from the mother’s side.

As soon as Rob graduated from a college, he entered the prestigious University of Southern California, Marshall School of Business; he finished his studies in 2009. In 2012, Rob announced he was back to the university to study law, just like his father. However, the USC's Gould School of Law did not confirm this information and claimed the young man did not apply for the university.

Thanks to his knowledge of business, Rob became an entrepreneur and launched his own brand sock line Arthur George in 2012. He was also the lead designer. The man said about his project:

“I feel like dress socks differentiate you in a different way - especially men in suits who just have the traditional business suit. The dress sock is the way to change it up in your mind, and I like wearing my pants up higher, so you see them.”

American sources inform that Mr. Kardashian has his share in other business projects, for instance, Perfect Skin, Rival Spot, and BG5.

Besides, Rob and his star sisters earn thanks to advertising large companies (Coca-Cola and etc.); according to The Telegraph, they just mention these products in their Instagram, Facebook, and Twitter posts.

In 2007, the reality show Keeping Up with the Kardashians came out. 20-year-old Rob appeared only in several episodes, but they made him popular. The young man’s mother and sisters Kim, Kylie, Kendall, Khloé, and Kourtney became the real stars.

In 2011, Rob participated in the TV project Dancing With The Stars (the 13th season); the famous choreograph and two-time ballroom dancing champion Cheryl Burke became his partner. Rob proved to be a good dancer and reached the final; however, Karina Smirnoff and JR Martinez surpassed them.

In 2012, Kardashian appeared in the show series Fox's The Choice. His next project relates to the time when he met Blac Chyna, the mother of his future daughter.

Rob and his girlfriend prepared a new reality show, Rob & Chyna; the premiere took place on September 11, 2016. The audience could watch the star couple’s interaction. The program was successful for the whole TV season; it was reopened the next year.

Rob’s first famous romance happened with the popular singer and TV presenter Adrienne Bailon; she earned her fame for the program Adrienne Bailon. The young people were dating in 2007-2009 and eventually broke up. A source close to the couple revealed the reason. Adrienne was four years older than her lover; young and career-oriented, she was different from Rob who was only a college student at that period.

Soon, Bailon found a new boyfriend; in comparison, Rob entered a new relationship only in 2012. The British singer Rita Ora captured the man’s heart. They spent a year together and split up suddenly; it was a big scandal. Rob posted several angry twits where he accused the woman of cheating.

“I'm actually disgusted a woman could give up her body to more than 20 dudes in less than a year's time while trying to start a career. How can a woman who is so busy trying to start her own career have time to be with so many dudes all while in a relationship?” wrote the offended guy on his page.

Considering that Rob lived in Los Angeles and Rita settled in London and complained she had little time for meetings, it becomes clear what Rob meant.

Rob is an amorous and sensitive person; after the painful break-up with Rita, he began a new relationship only in 2016. At that time, the family did not approve of the object of Rob’s passion. The former strip dancer and model Blac Chyna charmed Rob Kardashian so much that he proposed to her.

Still, there was a reason for that: Chyna was pregnant. In May 2016, happy Rob shared this news in social networks and announced his engagement. Kris Jenner and her daughters had to accept Rob’s choice.

It was decided to hold the wedding ceremony after the child’s birth. On November 10, 2016, Dream Renée Kardashian was born. Rob felt on cloud nine; he and Blac Chyna posted the photos of the girl on social network pages. Still, the conflict was arising. The couple kept having quarrels, breaking up, and reuniting. Eventually, in summer 2017, Rob hacked his girlfriend’s phone and read her messages.

According to Rob, Chyna wrote her lovers that she did not love “fat” and “insecure” Rob and abided him because of his name. Shocked and angry, Rob posted on Instagram that his bride was a prostitute and drug abuser who regularly cheated on him with other men; he published Chyna’s personal photos.

The woman did not tolerate that and sued the father of her daughter; she won the case. Kardashian had to apologize. The man’s family supported him; Rob’s sisters are fond of their brother and treat him gently. For instance, Kim Kardashian does not talk to Rita Ora because she used to twist her brother’s brain.

In May 2018, Rob Kardashian posted on his social network pages he would not “look like this anymore” and added hashtags “no surgery” and “put in work.”

Fans decided the showman who had been overweight (the man’s height is 183 cm.) became thinner. Nowadays, fans are looking forward to new pictures of the TV family member. 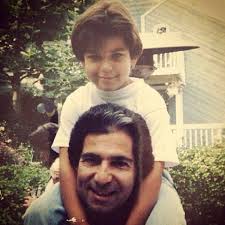