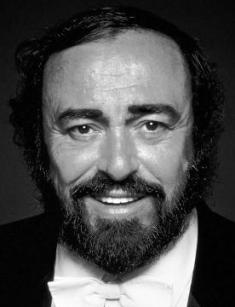 Luciano Pavarotti was an outstanding Opera singer of the second half of the XX century. Luciano was born on October 12, 1935, in Modena, Italy. Fernando Pavarotti, Luciano's father, worked as a baker, but singing was his weakness. Fernando did not become a professional singer only because he was afraid of public performance. Luciano's mother, Adele Venturi, worked on a tobacco factory. In 1943, with the arrival of the fascists, the family moved to a country farm. Parents, together with children, were fond of agriculture.

Little Luciano was engaged in music from an early age. The kid started to give his first concerts to neighbors and relatives at the age of four. Later, Luciano would sing in the church choir together with his father. At home, the boy would often listen to the records from his father's collection. At the age of twelve, he found himself in the opera theater for the first time in his life, where he heard tenor Beniamino Gigli. While still at school Schola Magistrale, the young man took a few vocal lessons from Professor Dondi and his wife.

Besides singing, Luciano played football and even seriously thought about the goalkeeper's career. But after receiving a diploma of secondary education, the mother persuaded her son to study to be a teacher. After receiving professional education, Luciano Pavarotti worked at a school as a primary teacher for two years. At the same time, Luciano began to take lessons with Arrigo Pola, and two years later – Ettore Campogalliani. After making the final decision to start a vocal career, Pavarotti left school.

In 1960, after laryngitis, Luciano faced complications typical of his profession, thickening of the ligaments, which led to the loss of voice. Pavarotti, having experienced a fiasco on stage during a concert in Ferrara, decided to leave the music world. However, a year later, the thickening disappeared, and the voice of the tenor acquired new colors and depth.

In 1961, Luciano won an International vocal competition. The first prize was awarded to two singers: Luciano Pavarotti and Dmitri Nabokov. Young vocalists got parts in the Opera La bohème at the Teatro Municipale in Reggio Emilia theater. In 1963, Pavarotti made his debut at the Vienna Opera and Covent Garden in London.

Success came to Luciano Pavarotti after the performance of Tonio in Donizetti's Lucia di Lammermoor, which the tenor first performed in the London Royal Theater in Covent Garden, and then in the Italian La Scala and American Metropolitan Opera. Pavarotti set a kind of record: he sang nine high "do" notes at the highest pitch of his voice in the aria of Tonio with impeccable ease.

The spectacular performance forever changed Pavarotti's creative biography. Impresario Herbert Breslin signed a contract with the new star of the Opera sky and got engaged in the promotion of the tenor in the best theaters in the world. Since 1972, in addition to performing in theatrical productions, Pavarotti began touring with solo concerts, which included classical Opera arias, Italian songs, and endings.

Besides the roles of the lyrical tenor Elvino in La sonnambula (The Sleepwalker) and Arturo in I puritani by Bellini, Edgardo in Lucia di Lammermoor by Donizetti, Alfred in La Traviata and the Duke of Mantua in Rigoletto by Verdi, Luciano Pavarotti mastered dramatic roles of Riccardo in Un Ballo in Maschera (A Masked Ball) by Verdi, Cavaradossi in Tosca by Puccini, Manrico in Il Trovatore and Radamès in Aida by Verdi. The Italian singer often appeared with performances on television, participated in Arena di Verona Festival, made recordings of famous Opera arias and favorite songs "In Memory of Enrico Caruso," "O Sole Mio."

In the early '80s, Luciano Pavarotti founded The Pavarotti International Voice Competition. In different years, the stage star went on tour in America and China with the winners of the competition, where, together with young talents, the singer performed fragments from the operas La bohème, L'elisir d'amore and Un Ballo in Maschera. Besides giving concerts, Pavarotti collaborated with the Vienna Opera and La Scala theater.

Luciano's performance in the Opera Aida with Plácido Domingo was each time accompanied by a long standing ovation and multiple curtain-ups. But it was not without failures: in 1992, in the grand opera Don Carlos staged by Franco Zeffirelli, which was performed in La Scala, the audience booed Pavarotti for the role. The tenor recognized his guilt and never played in this theater again.

A new round of international recognition of the Italian tenor took place in 1990 when BBC made the aria Nessun Dorma performed by Luciano Pavarotti, Plácido Domingo, Jose Carreras the opening theme of their broadcast of the football World Cup. The video for the clip was shot in the Roman Imperial baths of Caracalla. The circulation of sold-out records became the largest in the history of music, which is recorded in the Guinness book of records. The project Three Tenors was so successful that the singers performed at the opening of the next three World Cups.

Luciano Pavarotti popularized the opera. His solo concerts gathered up to half a million spectators who came to listen to the tenor live in the Central Park of New York, in London's Hyde Park, on The Champ de Mars in Paris. In 1992, Pavarotti created the program Pavarotti & Friends, which in addition to opera singers, involved such pop stars as Elton John, Sting, Brian Adams, Andrea Bocelli, Lionel Richie, James Brown, Celine Dion, and Sheryl Crow. In 1998, Luciano Pavarotti received the Grammy Legend Award.

While still in school, Luciano met his future wife Adua Veroni, who was also fond of singing. Together with Luciano, the girl went to work as a teacher in a rural school. The young people were able to get married in 1961, as soon as Pavarotti began to earn money on his own on the Opera stage. In 1962 the couple had a daughter, Lorenza, in 1964 – Cristina, in 1967 – Giuliana.

Marriage with Adua lasted 40 years, but constant cheating of Luciano forced his wife to file for divorce. During his musical career, Pavarotti had brief affairs with many singers. The most famous love affair of the 80s was his relationship with a student, Madelyn Renee. But at the age of sixty, the tenor met the girl who gave Luciano a second life.

The young lady's name was Nicoletta Mantovani, she was 36 years younger than the Maestro. In 2000, after his divorce from his first wife, Pavarotti proposed to Nicoletta and built a spacious mansion for the new family. In 2003, his wife gave birth to twins – a son Riccardo and daughter Alice, but the newborn son died soon. Pavarotti gave all his strength to the education of his little daughter.

In 2004 Luciano heard a disappointing diagnosis – pancreatic cancer. The performer, having weighed all the possibilities, decides to hold the last farewell tour of 40 cities around the world. In 2005, the singer released the record The Best, which included the best compositions ever performed by Pavarotti. The last performance of the great tenor took place on February 10, 2006, at the Turin Olympics, after which Pavarotti went to hospital for surgery to remove cancer.

Luciano's condition improved, but in August 2007 the singer suffered pneumonia. Back home in Madena, the actor died on September 6, 2007. The death of the Maestro couldn't leave his fans indifferent. For three days, while the coffin of Luciano Pavarotti stood in the Cathedral of his native city, people went around the clock to say goodbye to the idol.