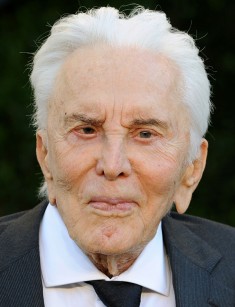 Kirk Douglas is one of the last representatives of Hollywood’s "Golden Age," the oldest star of the American and world cinematography. In 2016 he celebrated his 100th anniversary. The former goodwill ambassador and philanthropist distinguished himself as a talented writer, having presented to the readers ten novels and memoirs. But cinematography always played the major role in the biography of the Hollywood star.

The actor was three times nominated for Academic Awards and received the main award in the movie industry in 1996 as a sign of respect and recognition. In his assets, Douglas Sr. has the prizes of Golden Globe, Awards, Golden Bear Awards, and other ten nominations. Moreover, the actor has his personalized star on the Hollywood Walk of Fame.

The future actor was born in American Amsterdam at the end of 1916. Kirk was the first son and the fourth child in the family of poor Russian emigrants. Herschel Danielovitch and Bryna Sanglel left the town of Chavusy situated 40 kilometers from Mogilev (the former territory of the Russian Empire) in 1910.

When the future actor was born, he received the name of Issur. He grew in the Jewish community and at an early age became aware of the fact what anti-semitism was. Later he had to change is the name to the one which is known to the whole world – Kirk Douglas. His parents also Americanized their names and became Harry and Bertha Demsky. In the USA the number of their children reached seven, but Kirk remained the only son of their parents.

The future Hollywood star began to work early: his family was living in poverty. The boy delivered mails and products and dreamed of becoming an actor. For the first time, Issur Demsky began to think about the acting career at the end of the second form. His parents and sisters were the first to see his performances: at home Izzy organized plays.

After the completion of the studies at school the guy entered the college. His fancy for the boxing helped him to earn the grant that's why he didn't have to ask his parents to give him money as they were supporting his younger sisters. In the late thirties, Kirk Douglas received the college's diploma and went to New York where he entered the Academy of Arts.

Kirk didn't have enough money to pay for two-year studies, but the future actor impressed the teachers so much that he was accepted and was given a grant. During his studies in the drama academy, he was working as a waiter and didn't avoid any work.

There began World War II, and Kirk Douglas had to go to the military recruitment center. He could avoid the military service because of his poor eyesight, but he did not use this possibility: for a month of special eyes "gymnastics" he improved his vision and joined the army ranks. In 1994 he was transferred to the reserve from the Pacific fleet.

When Kirk Douglas returned to a peaceful life, he realized his children’s dream. He began his acing biography on the stage of New York theatre. The beginning actor played in the performances, appeared in the commercials and radio shows. After the success on Broadway Douglas moved to Los Angeles in 1945 to be closer to "factory of dreams."

His classmate on the academy Lauren Bacall who achieved success in Hollywood helped Kirk. She recommended the young actor to her familiar producer - the emigrant from Russia. In such a way the audience saw Douglas for the first time in the drama movie The Strange Love of Martha Ivers directed by the American classic, Oscar-winning Lewis Milestone. The movie was nominated for Academic Awards for best script, and the bright debutant was noticed by the spectators and directors.

On the movie set of the crime drama, I Walk Alone Douglas met Burt Lancaster with whom he became friendly and acted together with seven pictures. In 1949 Douglas was nominated for the major movie award for the first time: there was released the noir drama Champion directed by the Canadian director Mark Robson. In this picture, Kirk was entrusted with the leading role. The producers and actors didn’t expect that the movie would receive such positive feedback at the movie critics and spectators.

After the appearance in the movie, Champion actor began to have a numerous army of the admirers. He was recognized on the streets, and he was asked for autographs. Kirk Douglas concluded the favorable contract with Warner Bros. and forever "registered" in Hollywood. Every year he took part in one-two new projects.

Michael Curtice in which Kirk worked together with his classmate and friend Lauren Bacall. The actor was entrusted with versatile roles. In the movie Champion Kirk Douglas performed the role of the courageous boxer, in the picture Young Man with a Horn appeared in the role of the fanatical musician, in the crime drama Ace in the Hole he was a cynical reporter, and in Detective Story he played the character of the corrupt cop.

In the early fifties, Douglas appeared in the company of the leading actors. The star was invited to play the leading characters, and more and more seldom he received the secondary roles. The drama The Bad and the Beautiful which was released in December of 1952 brought the American actor the second nomination for the desired figure. In this movie, Kirk Douglas transformed into the character of the ambitious producer whose career was successful and then turned into the failure. The sensual and refined Hollywood star Lana Turner appeared in the movie together with Kirk Douglas.

In the steampunk based on the novel Twenty Thousand Leagues Under the Sea written by Jules Verne which won two Academic Awards, Kirk Douglas transformed into talkative harpooner of Ned Land.

But the actor received the awards and honors, not for this science-fiction movie, but the biographic drama Lust for Life about Vincent van Gogh. The director Vincente Minnelli entrusted Douglas with the major role which he performed brilliantly. After this movie, he received the third nomination for Academic and Golden Globe Awards.

In 1960 Brian Production shot the movie in the peplum genre under the title Spartacus. It was the first successful movie of legendary Stanley Kubrick. Douglas played the role of revolts and gladiators. Laurence Olivier and Tony Curtis performed the roles in the screen adaptation of the epos. The picture was called the forerunner of the blockbusters. This picture received four Academic Awards, but during the shootings, Douglas and Kubrick finally quarreled.

Kirk Douglas felt and predicted the tendencies of the movie market. And the fact that he pursued the acquisitions of rights for the performance of the novel of the American writer One Flew Over the Cuckoo's Nest proves it. Though, the novel staged by Douglas on Broadway turned out to be a failure. In the mid-seventies, the baton was passed by Kirk's son - Michael Douglas who became the producer of the movie drama. One Flew Over the Cuckoo's Nest. This movie brought Academic Awards to Michael.

Kirk Douglas called his role in the movie Lonely are the Brave the favorite one. In this picture, the actor appeared in the image of the cowboy.

The change of the public's mood at the end of 1960-s influenced the star’s career. The audience got bored of the images of the characters of the westerns and military dramas, and the attempts of Kirk Douglas to try himself in the new image in the movies The Arrangement and The Brotherhood didn’t bring him success. At the same time, the last film is considered to be the forerunner of the cult picture The Godfather.

The critics and the audience warmly met the director’s debut of Kirk Douglas who presented the western Posse in the middle seventies. The master played the leading role of the courageous marshal Howard who caught up with the gang.

The latest remarkable work of the movie actor is the character of Harry Agensky in the comedy project Diamonds. After the stroke in 1996, Kirk Douglas appeared on the screens at the beginning of 2000-s.

Kirk Douglas met the tendencies of the new century optimistically: in 1994 the Hollywood actor created the blog on MySpace. In 1999 the classic of the movie industry sent $15 million for the arrangement of the clinic for the colleagues who have Alzheimer's disease.

In his young years, Kirk Douglas who was a handsome, athletic man with a square jaw had a reputation of the lady-killer. In Hollywood public was discussing his love affairs with Joan Crawford and Marlene Dietrich.

In 1943 during the short vacation after the wound, Douglas got married to his Diana Dill who gave birth to their two sons – Michael and Joel.

Kirk’s second spouse, the actress Anne Buydens, gave birth to two Kirk’s children - Peter and Eric. All children of the star followed in the footsteps of their parents, but only Michael Douglas gained popularity.

At the end of 2016 the actor of "factory of dreams" celebrated his 100th anniversary. Hi, son Michael together with his wife - the Hollywood star Catherine Zeta-Jones organized his anniversary.

Two hundred friends and colleagues attended the party which was held at Los Angeles hotel. To make a speech, Kirk Douglas had to train with a speech therapist. Steven Spielberg became the guest of honor of the evening. 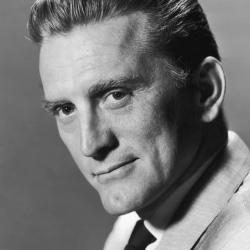