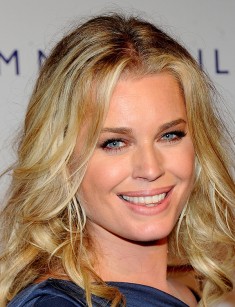 Rebecca was born on November 6, 1972, in California. The future catwalk and Hollywood film star spent her childhood and adolescence in the city of Berkeley. Romijn is an American of Dutch and English ancestry.

Her parents moved to California from the Netherlands and put down new roots. The mother of the Hollywood star is an English teacher. Elizabeth Kuizenga also wrote books and adored the communication with university scholars, so professors and students often visited their house. Little Rebecca listened to intellectual disputes and grew up in a bohemian atmosphere where they respected the ideas of the hippies.

Rebecca Romijn’s father knew little about the art world. Jaap Romijn worked for a furniture company. The actress’s maternal grandfather was a seminary professor and Presbyterian minister. The grandmother was a cousin of the television star, American comedian David Letterman.

Strong family and the love of parents, a happy childhood turned Rebecca into a cheerful and benevolent child. At school, the sociable and easygoing girl was nicknamed the "Jolly Blonde Giant" because 14-year-old Romijn was 1,79 meters tall like a model. After graduating, the girl became a student at the University of California, where she studied music and took the first steps in show business. Rebecca participated in talent shows.

Rebecca Romijn did not start a modeling career early. She was 19 years old then. At first, the slim blonde appeared in advertising campaigns for underwear and bathing suits. Soon the beautiful blue-eyed lady walked the runway, where she represented world brands clothing with such stars like Kate Moss, Cindy Crawford, and Naomi Campbell.

At 23, Rebecca Romijn left the university because she worked in a modeling agency most of the time. The career of the model was rapidly developing. The girl participated in photo shoots, walked the runways of Paris, Milan, and London. Photos with Romijn appeared in the fashion magazines Elle and Vogue. Rebecca lived in Paris for two and a half years and was the face of Victoria's Secret.

For the first time, Rebecca Romijn appeared on the screen in the late 1990s. The model turned into a television star. The woman was the host of MTV's House of Style.

It was also the start of her acting career. The beginning actress was offered small roles in the comedy series Friends and Just Shoot Me!. She played a bearded lady in the movie Dirty Work, and the model got the cameo role in the adventure action movie Austin Powers: The Spy Who Shagged Me.

Rebecca Romijn achieved real fame in the 2000s. In 2000 the fantastic action movie X-Men directed by Bryan Singer was released. The actress got the role of the blue mutant Mystique. It is hard to recognize the beautiful woman in the image of Mystique because the mutant is covered with scales from the head to the feet. The spiteful half human and half reptilian became one of the main characters in the comics.

Rebecca played Mystique three times. Later, the sequels X2: X-Men United and X-Men: The Last Stand were released. The last film of the trilogy was released in 2006. Romijn met Hugh Jackman, Patrick Stewart and Halle Berry on the set.

After the release of the detective film, critics and the audience began talking about her dramatic talent. Romijn played the leading and dual role as Lily and Laure Ash. The bewildering plot, full of eroticism and cruelty, was not significant at the box office, but Femme Fatale is called the best film of the director.

Rebecca Romijn could win recognition from the public as a Hollywood actress after the release of the thriller The Punisher with John Travolta, the horror film Godsend and the comic melodrama The Alibi. Nika Hamm’s American horror film Godsend has scandalous fame. The reason was not a bad acting play by actors Rebecca Romijn, Greg Kinnear and Robert De Niro, but the plot of the film. Romijn and Kinnear played a married couple whose child died. The doctor advised them to clone the deceased son, but when he turned eight (the age of their first son’s death), he became a real monster.

The critic and Pulitzer laureate, Roger Ebert, criticized the thriller as it was not true to life and lacked psychological truth. The comedy The Alibi directed by Matt Checkowski and Kurt Mattila got positive reviews. Rebecca Romijn appeared on the screen with British comedian Steve Coogan, nominee for the Oscar and the Golden Globe.

In 2007, the audience saw the actress in the comedy sitcom Ugly Betty with America Ferrera in the leading role. Rebecca played transsexual Alexis Meade in the first three seasons of the project. A year later, Romijn left the set because of pregnancy. In 2009, the Hollywood actress starred in the fantasy comedy-drama Eastwick, based on John Updike's novel The Witches of Eastwick.

Rebecca Romijn, Lindsay Price, Jaime Ray Newman and Paul Gross played leading roles in the series. It premiered in September 2009 on ABC, but a month later, the project was closed as the ratings were too low. For the last five years, Rebecca Romijn has been playing in the series. The audience saw the actress in the projects Good Deeds, Pepper Dennis and The Librarians.

Rebecca Romijn has always been popular with men. GQ magazine named the model a woman of the year twice, and men's magazines repeatedly awarded her the most beautiful woman title. The first actress’s husband was a colleague, John Stamos. The couple lived together until 2005 and then announced their separation. Rebecca was not alone for a long time. Next year, Romijn had a love affair with comedian Jerry O'Connell.

For the first time, there was a spark between Rebecca and Jerry at Maxim magazine party, but the actress was married to Stamos then. After the divorce, there were no barriers for Rebecca and O'Connell, in 2007 they married. The couple is bringing up two charming twin daughters, Dolly Rebecca-Rose and Charlie Tamara-Tulip. The children were born through IVF in late 2008.

On her Instagram page, Rebecca pleases subscribers and fans with family photos, and it is clear that the life of the couple and the eight-year-old twins are quite happy.

In 2017, the couple celebrated the 10th Wedding Anniversary. Jerry O'Connell admitted in an interview that he loved his charming wife the same way as it was on the first day of their acquaintance. 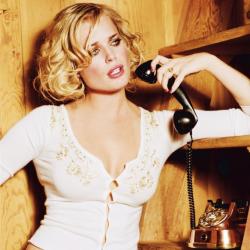