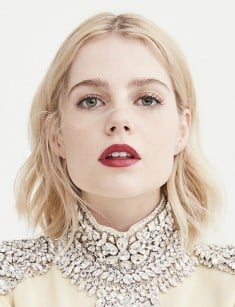 Alongside with shopping, dates, meetings with girlfriends and discussion of the outfits of the celebrities one of the favorite hobbies of the "weaker sex" is to imagine yourself on the place of the companions of the popular men. In this case, the actresses are the most fortunate as because in the line of their duties they have to embody the characters of the queens of hearts of all cult personalities. In this sphere, everything is perfect at Lucy Boynton. On the screen, she managed to appear in the image of the muse of Freddie Mercury, and in reality - of incomparable Johnny Depp.

Nothing brings the lovers together like common hobbies. It seems that Adriaane Pielou and Graham Boynton were united by one passion for both of them – traveling which the man "possessed" on his post of the editor-in-chief of Telegraph. What about his wife she was allowed to become the reporter and at the same time the writer in the same place.

Their younger daughter Lucy was born on the 17th of January of 1994. Hardly had the child turned five years old, her family with the children decided to relocate from New York to London. Though their father was an immigrant from Zimbabwe, he spent almost all his life in Great Britain. As the actress remembered, during a couple of years after the relocation she had American accent from which later she has managed to get rid off. Together with her elder sister Emma Louise even teased each other calling themselves "little English girls."

The girl has been lucky to comprehend the basics of the science in private educational institutions. She began her studies at Blackheath High School; later she continued her education at James Allen's Girls' School. Still being a schoolgirl, she followed the example of her parents and wrote and sent her sketch about the exciting trip to "paradise on Earth" - Disneyland to the same The Telegraph.

In childhood, Lucy even didn't have any dreams about the acting career and wanted to work in the shelters for homeless animals. However, the successful auditions in 2006 brought her the role in the full-length movie about the creator of Peter rabbit Renée Zellweger and Emily Watson became her partners on the movie set.

In the movie Miss Potter, the rising star has been successful: the girl has enthusiastically called her first day of the shootings the best one in her life, and already in a year she was nominated for Young Artist Awards for her debut work. Lucy’s mother, owing to the received journalistic education, didn’t stand and published in her edition the article under the title "My Lucie Is a Movie Star." Her daughter wasn't very happy with this situation.

Later, Boynton received the possibility to transform into the young red-haired dancer and to cooperate with Emma Watson. By that time millions of the spectators already fell in love with the character of Hermione Granger in the movie Ballet Shoes.

The series Sense & Sensibility which is a screen-adaptation of Jane Austen and the story about Borgia family take the particular place in the creative biography of the actress. Later she took part in the episodes of Law & Order: UK and Life in Squares which was broadcast on BBC channel.

The movie Sing Street was at once nominated for four prestigious awards. This picture tells a story about the young man who managed to conquer the heart of the main beautiful lady. As a result, the film has received Golden Globe Awards and the heart of the actress of the main role:

"I have stopped crying at the end, the final of the movie has touched me, I was watching this picture on the TV screen without the audience so that I could feel every moment. It’s unbelievable. Music can be vital".

The premiere of the British horror movie Don't Knock Twice was premiered the same year. Lucy was convincing in her role fighting against otherworldly powers.

In November of 2017, Kenneth Branagh became responsible for the festive mood of the audience when he presented the surprising and extremely stylish movie Murder on the Orient Express. According to the memories of the girl, the shootings began with the shock. She found herself in the closed room of the tube compartment with the idols of her childhood. Even though the effective heroine who is keen on the barbiturates appears only at the end of the movie, the actress at once enchanted the audience in a duet with Sergei Polunin. Sergei performed the role of her husband and Lucy distinguished from the remarkable cast.

It's difficult not to fall in love with the talented, charismatic beauty who has long eyelashes and gorgeous figure (she is 165 cm tall, and she weighs 52 kilos). And it’s not just about the directors who offered her cooperation but also about the sex symbol which more than once proved this flattering title.

By the information of some mass media resources during the shootings of the picture produced by the novel of the great detective writer Agatha Christie, Johnny Depp, and Lucy Boynton began to have a serious love affair. There were rumors that in the sake of his new beloved woman the man even wanted to relocate to London. However, the couple of celebrities didn’t give any comments, confirmations or denials of this information.

Hardly had passed the disputes on the previous work and possible relations there began new discussions. The green-eyed blonde was told to have a love affair with Rami Malek. The young people who performed the roles of Mary Austin and Farrokh Bulsara seemed to embody their feelings in their reality.

They accompanied each other at secular events and actions, for example at the fashion displays or just during the lunch breaks. Their joint photo also appeared on the social network of the celebrity. Besides, answering the direct questions of the journalists about the news in her personal life, she says with laughter:

"I will keep you posted."

The end of October of 2018 was marked by the long-awaited release of the movie Bohemian Rhapsody in the hire. In this movie, Lucy was entrusted with the serious task - to transform into the character of the loyal friend and beloved woman of Queen’s legendary vocalist. By the words of the movie critics,

"This role wouldn’t seem very suitable for the rising star, but the absence of the need to be praised has made Boynton an ideal candidacy."

Between Twitter and Instagram, the actress prefers the latter and delights her subscribers with the information about her favorite book ("Feminists Don't Wear Pink (and other lies)"), great outfits which have brought her the title of the Stylish Icon and photo shootings for the magazines. By the way, what about clothes she follows English modesty and tackiness. Unfortunately, for the majority of the male fans of the actress, there are no photos of her in a swimsuit on the web. 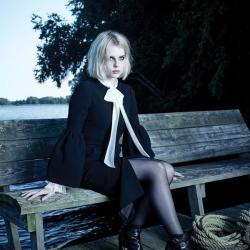