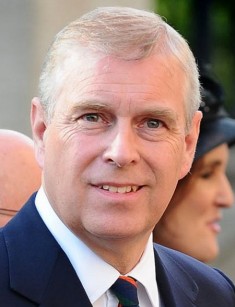 Prince Andrew, the second son of Queen Elizabeth II and Prince Philip, is the seventh person in the line of succession to the British throne. As the royal family member, he receives much attention from the media. Although the Duke of York’s military career was impressive, the majority of publications pertain to his private life.

Andrew Albert Christian Edward was born on February 19, 1960. He became the third child among the four kids in the royal family. The eldest son, Charles, Prince of Wales, was born in 1948; two years later, Princess Anne was born. The youngest child, Prince Edward, Earl of Wessex, was born in 1964.

On April 8, 1960, the Archbishop of Canterbury, Geoffrey Fisher baptized the boy in the Palace's Music Room. Andrew was the first child who was born into the family of the ruling monarch (Elizabeth II came into throne in 1952) from the times of Princess Beatrice, the daughter of Queen Victoria (1837-1901).

Just like his siblings, Andrew grew up at Buckingham Palace. The kids were brought up by a governess; she educated Andrew until he turned five. Later, the boy was sent to Heatherdown School not far from Ascot, Berkshire.

In September 1973, Andrew entered the prestigious Gordonstoun boarding school in Northern Scotland. He was an excellent student. In January-June 1977, the young man underwent a study course at Lakefield College School in Canada. Two years later, the prince successfully passed his exams in English, History, Economic, and Politics and graduated from Gordonstoun.

In April 1979, Andrew went to the Royal Naval College Flight where he became a trained military pilot. In a month, the young man recommended himself as a good professional and signed the contract for 12 years. Two years later, in 1982, the royal family member joined 820 Naval Air Squadron that served at the aircraft carrier, HMS Invincible. This is where the man’s life got closer to danger: the Falklands War began.

On April 2, 1982, Argentina suddenly occupied the Falkland Islands, the overseas territory of Great Britain; it was the cause of the war. At that time, Invincible was one of the two aircraft carriers afloat; it became the vanguard ship of the Royal Navy.

The country’s government excluded the young man from the military operation so that Andrew’s life was not endangered. However, the Queen insisted her son should be returned. Andrew was appointed the second pilot of Sea King helicopter that was to liquidate the Exocet missile.

On June 14, 1982, when the war ended, Invincible arrived at Portsmouth where Elizabeth II and Prince Philip welcomed their son together with the citizens of the country. The Navy Commander Nigel Ward called Andrew “an excellent pilot and a very promising officer.”

The Prince stayed in the army. On February 1, 1984, he became Lieutenant and Queen’s personal aide-de-Camp. In the following years, Andrew passed a squadron command examination exam. In 1993-1994, he commanded a minehunter that looked for and destroyed bombs.

The man finished his military career in 2001 as an officer of the Diplomatic Directorate of the Naval Staff. Three years later, the royal family member received the rank of the Honorary Captain; in 2010, he became an Honorary Rear Admiral. Five years later, Prince Andrew was promoted to Honorary Vice Admiral.

In addition to the career of a pilot, Duke of York has been engaged in charity. In 2001, he started collaborating with the British company Trade & Investment as the United Kingdom's Special Representative. Andrew was responsible for representing his country in trade fairs and exhibitions all over the globe.

In February 2011, during the civil war in Libya, the House of Commons member Chris Bryant questioned the prince’s role: according to him, Andrew was

Eventually, the man was removed from his position.

On September 3, 2012, Duke of York was one of the 40 people who climbed down The Shard, the highest skyscraper in Europe. The risky trick was supposed to attract investors’ attention to Outward Bound and Royal Marines Charitable funds.

Since 2014, the project [email protected] has been carried out; Prince Andrew consults entrepreneurs, provides promising business ideas with financial support, and shares contacts of possible investors.

Many prizes and organizations have been named after the Duke of York. For instance, The Prince Andrew fund supports children with significant academic or professional achievements; technically talented young people receive Inspiring Digital Enterprise Award (iDEA); The Duke of York Young Entrepreneur is awarded to young businesspersons.

On July 23, 1986, Prince Andrew married Sarah Ferguson, the daughter of Major Ronald Ferguson. The ceremony was held at the Westminster Abbey. Two children were born in this family: Princess Beatrice of York (August 8, 1988) and Princess Eugenie of York (March 23, 1990).

The marriage seemed to be happy, yet Andrew spent little time with his wife because of his military career. In the early 1990s, Sarah was often seen with other men; in March 1992, the couple announced they were divorcing. The legal procedures finished on May 30, 1996. Several months after the break-up, the media published the pictures of Sarah Ferguson and the millionaire Steve Wyatt: they were resting on a beach, and the man was kissing the legs of the prince’s yet official wife. After that incident, Prince Philip banned any material support of Ferguson.

In 2001, Andrew began to date the businesswoman Amanda Staveley. Two years later, a Daily Mail journalist reported the prince was going to propose to her, but the former model said in her interview to The Sunday Telegraph:

“I will not be marrying Andrew now or in the future.” After that, the couple split up.

In 2010, Sarah Ferguson who continued to live with her ex-husband was caught on the bribe: she took money for organizing audiences with the prince. The video record of the Indian reporter Mahmud Mazer from News of the World magazine became a clear proof: the duchess received $40 000 in advance for the meeting. The Prince’s entourage denied his knowledge of the situation. In a year, Prince Andrew paid off the multi-million debts of his former wife.

On October 12, 2018, the man’s younger daughter, Princess Eugenia, married Jack Brooksbank, George Clooney’s co-partner in the production of tequila “Casamigos.” Before the marriage, the couple had been dating for seven years. The ceremony took place at St George's Chapel at Windsor Castle.

Prince Andrew continues to do the charity work. Nowadays, he financially supports the fund Fight for Sight that studies eye diseases and looks for the way to prevent and cure blindness. 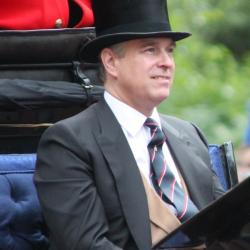