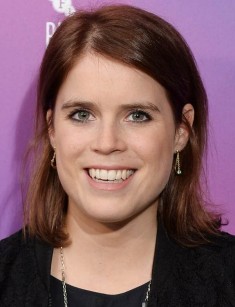 Princess Eugenie Victoria Helena of York is a member of the British royal family, the youngest daughter of Prince Andrew, Duke of York, and Sarah Margaret Ferguson, Duchess of York. She is a granddaughter of Queen Elizabeth II and the ninth person in the line of succession to the country’s throne.

Princess Eugenie Victoria Helena of York was born in London on March 23, 1990. She became the second daughter in the family of Prince Andrew and Sarah Ferguson. Elizabeth II is her grandmother, and she is the sixth granddaughter of the queen. On March 30, when it was the seventh day after the girl was born, her official name was announced. Princess Eugenie was named after Victoria Eugenie of Battenberg and Princess Helena of Schleswig-Holstein.

The child was baptized at St. Mary Magdalene Church, Sandringham, on December 23, 1990. For the first time, the ceremony was public and the Lily Font, the baptismal font made in 1840 by Queen Victoria’s order and stored in Tower, was not used.

Eugenie was the last but one royal baby who was baptized in the family dress sewn in 1841 by the Scottish tailor Jeanette Sutherland. James Ogilvy (the father’s second cousin), Captain Alastair Ross, Susan Ferguson (the second wife of the girl’s maternal grandfather), Julia Dodd-Noble, and Louise Blacker became her god-parents.

Andrew of York served in the Royal Navy and spent the majority of time outside his house. Sarah was looking after the children and felt lonely.

The spouses’ relationship deteriorated; in May 1996, they divorced. Sarah, Duchess of York, rejected the divorce compensation and remained on friendly terms with her ex-husband and the royal family. The former spouses agreed on the shared custody of their kids.

In 1992-1993, Eugenie attended Winkfield Montessori kindergarten; later, she entered Upton House school for girls aged 2-11 where her sister Beatrice studied. In 1995, the young princess came to Coworth Park School; in 2001, she became a student of the St. George's School located not far from Windsor Castle.

In October 2002, the 12-year-old Eugenie had health issues; she underwent surgery at the Royal National Orthopaedic Hospital, London, to have her scoliosis treated. The in-time operation resulted in the girl’s full recovery.

In 2003, Eugenie continued her education at Marlborough College, the prestigious boarding school in Wiltshire where the princess’s cousin, Kate Middleton, Duchess of Cambridge, studied. Eugenie took Art History and English Literature as her majors.

In 2008, the young woman took a break and traveled across various countries; however, she had to terminate the journey as Royal Security Services insisted. In September 2009, Eugenie entered Newcastle University and resided at the university accommodation. The young woman studied History of Art, English, Literature, and Politics; in 2012, she graduated.

In 2013, the princess moved to New York and began her career at Paddle8 founded by Alexander Gilkes, Prince Harry’s friend. For the next two years, Eugenie worked as a benefit auctions manager. In 2015, she returned to London to become an associate director at Swedish Hauser & Wirth art gallery. Eugenie has no state responsibilities; she receives no allowance from the royal treasury. She is engaged in social and charity work.

In 2007, Eugenie of York made a public appearance as a royal member: together with her father and sister Beatrice, she delivered a speech at the ceremony in memory of Princess Diana who had tragically died in 1997. In 2008, Eugenie participated in the opening of a Teenage Cancer Trust's unit; this charity organization works with teenagers with cancer in Leeds.

On June 2, 2011, Eugenie and her father visited the Royal National Orthopaedic Hospital where she had had surgery. In 2012, the princess began to collect money for the hospital reconstruction. Together with Daisy London Jewelry, she released a series of jewelry; the funds from the sales were sent to the hospital foundation. In 2014, a children’s unit was opened; the princess became its sponsor.

In January 2013, Eugenie and Beatrice officially represented the British Queen and visited Berlin and Hanover; they participated in several events including the opening of the former Hanoverian royal palace, the Schloss Herrenhausen, which was destructed by the Royal Air Force during the World War II.

In 2016, Eugenie, her mother, and sister collaborated with the modern British artist Teddy M who created the first royal graffiti. His work was sold in London for the five-figure sum; the money was given to the fund Children in Crisis aimed at improving the lives of women and children from dysfunctional families in developing countries.

The same year, Eugenie and Beatrice became the curators of Teenage Cancer Trust. Besides, the younger sister visited The Salvation Army safe house and met victims of slavery and rape.

In 2017, the queen’s granddaughter started co-working with New Museum in New York and became an ambassador for Artemis Council that supported female artists. Eugenie also presented the charity organization Project 0 that was dealing with the marine plastic pollution issue together with Sky Ocean Rescue.

In 2018, there was an important event: the princess delivered a speech on modern slavery at the NEXUS summit at the Headquarters of the United Nations in New York. Soon, the woman visited the grantees of the UN Trust Fund in Serbia: ASTRA and ATINA that helped human trafficking victims and provided them with jobs and safe places to live.

Although Princess Eugenie is a bright member of the royal family and the paparazzi are watching her all the time, there is not so much information about her private life. The young woman likes art and literature and spends much time with her family; her relationship with her queen grandmother is warm.

When Eugenie of York was a student, she and her sister were often noticed at parties and nightclubs. Journalists caught the princess with a cigarette; once, they found her naked on a lawn, accompanied by her drunk friends.

As the young woman began her career, she sobered down; her lifestyle became more settled. In one of her interviews, the princess revealed how her days started: an early wake-up, checking her e-mail and Instagram messages, park or gym exercises, walk with a dog.

For a long time, journalists and fans believed Eugenie of York was single. At the beginning of 2018, Buckingham Palace announced the engagement of the princess and Jack Brooksbank, a businessman and nightclub general manager. The couple met in 2010 in the ski resort Verbier, Switzerland. The man proposed to Eugenie in Nicaragua where the young people were on vacation together.

The bride was wearing a gorgeous Peter Pilotto wedding dress with long sleeves and open back; its silhouette emphasized the woman’s body advantages. The back scar from the surgery was not covered. Eugenie preferred the Greville emerald kokoshnik tiara to a veil; it was her family heirloom that was worn at the official event for the first time.

After the ceremony, the young people rode Windsor streets in an open carriage. The second part of the royal wedding took place at the York residence, Royal Lodge. The guests enjoyed champagne, tequila, and pizza. The singer Robbie Williams gave an improvisation concert.

After the marriage, Princess Eugenie and her husband settled in one of the cottages in the Kensington Palace; Prince Harry’s family became their neighbors.

Eugenie posted several behind-the-curtains photos of the wedding on her Instagram page.

The newlyweds went to their honeymoon trip; the location was kept secret. Royal experts informed that the princess and her husband were at Seychelles or Sir Richard Branson’s private resort in the Caribbean Sea. 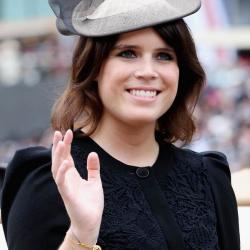