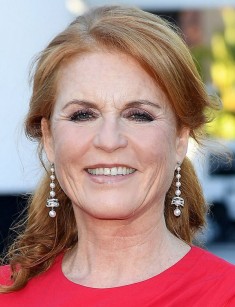 Sarah Ferguson is Duchess of York, a writer, social activist, movie producer, and TV presenter. She used to be the wife of Prince Andrew, Duke of York and the second child of Queen Elizabeth II and Prince Philipp. She has two daughters: Princess Beatrice and Princess Eugenia of York who are the eighth and the ninth candidates in the line to the British throne. People gave Sarah the nickname “Fergie.”

Sarah Margaret Ferguson was born on October 15, 1959, in Welbeck Hospital in London. She was the second daughter of Major Ronald Ferguson and his first wife Susan Wright. The girl’s parents divorced in 1974. The next year, her mother married a polo player Héctor Barrantes and settled in Trenque Lauquen, Argentina.

Sarah stayed with her father; they lived in the 480-acre mansion Dummer Down Farm, Hampshire. In 1976, Major Ferguson married for the second time; he and Susan Deptford had three more children: Andrew, Alice, and Elizabeth.

The girl went to the primary Daneshill School, Stratfield Turgis. Teachers remembered Sarah as a brave, active, playful, and extroverted little girl and a red-haired daredevil. Later on, Ferguson attended Hurst Lodge School in Ascot. The future Duchess was not an excellent student, but she showed her talents in swimming and tennis.

At 14, Sarah made friends with Diana Spencer, future Princess Diana: both girls came from the noble, belonged to the royal circle, and often played with Elizabeth’s children.

In 1976, Ferguson finished the courses at Queen's Secretarial College and got hired at an art gallery. Later, she worked in two PR-agencies in London and joined the publishing industry.

Sarah’s youth was stormy and romantic. She used to date a stockbroker Kim Smith-Bingham and later had a relationship with Paddy McNally, a motor racing manager who was 22 years older than the woman. In 1985, thanks to Princess Diana, Sarah resumed the acquaintance with Andrew, the second son of Queen Elizabeth. The young people had known each other from their childhood; they occasionally met in polo games.

In March 1986, Buckingham Palace announced Prince Andrew and Sarah Ferguson’s engagement. Andrew himself created the engagement ring: there were ten diamonds around a Burmese ruby; the ring looked beautiful with Sarah’s red hair.

After the queen gave her permission, Andrew and Sarah married at Westminster Abbey; the ceremony took place on July 23, 1986. Elizabeth II presented the bride a tiara made of platinum and decorated with Garrard & Co diamonds.

As the queen gave Andrew the title of Duke of York, Sarah became Duchess of York. After the wedding, the couple left London and had their honeymoon on the Azores.

In the first years of their life together, Sarah and Andrew spent a lot of time with Prince Charles and his wife, Princess Diana. Duchess of York was cute, natural, and zestful; she charmed the royal family quickly and became their favorite.

Two years after the marriage, on August 8, 1988, Beatrice Elizabeth Mary, the first daughter of the couple, was born. She became the first princess born in the royal family after Princess Anne, the daughter of Elizabeth II. On March 23, 1990, Sarah and Andrew’s second daughter, Eugenie Victoria Helena, was born. After two pregnancies, Sarah put on some weight, and the media were laughing at her.

Gradually, the family life became a burden for Duchess of York. Her husband was a Navy officer and frequently left home for a long time. Sarah was bringing up the children and engaged in social activities, just as a royal member is supposed to do. While Andrew was absent, Fergie was often seen with other men: the Texas billionaire Steve Wyatt and the actor Sylvester Stallone.

In spring 1992, Andrew and Sarah parted from each other; it was announced that Duchess would no longer perform duties on behalf of the queen. In August 1992, Daily Mirror published the photos of Sarah who was sunbathing topless with the American financial manager John Bryan. Those pictures provoked a public outcry and became a dark spot in the woman’s biography.

In May 1996, four years after the breakup, Sarah and Andrew announced they were going to divorce officially. Ferguson said she received £15 thousand from the royal family annually and the shared custody over the daughters. However, The Sunday Telegraph reported that Sarah gained £3 million as compensation.

After the divorce that took place on May 30, 1996, according to the documents regulating the royal titles after break-ups, Sarah lost the title “Her Royal Highness” but remained Duchess of York. She will lose it if she marries again.

After the break-up, the ex-spouses remained on friendly terms. Sarah can visit some public events with her daughters. For instance, she was present at the investitures of the Duke of York into the Royal Victorian Order and the Order of the Garter or horse racing at Royal Ascot. Besides, Fergie was also invited to the wedding of Prince Harry and Meghan Markle in 2018. Naturally, the woman attended the wedding of her daughter, Princess Eugenie.

The noble circles continue to treat Sarah as the member of the royal family. Sometimes, the former spouses visit Elizabeth II in Balmoral Castle. In some of her 2013 interviews, Duchess of York suggested she could improve her personal life and marry Prince Andrew again. She said:

“He’ll always be my prince.”

Before 2004, Duke of York and his ex-wife lived in their family house Sunninghill Park, Berkshire. Later on, Andrew moved to the renovated Royal Lodge in Windsor Great Park. In 2007, Sarah rented Dolphin House located nearby, but she had to leave the building because of a fire that happened there in 2008 and come back to her ex-husband’s residence.

In 2015, Fergie moved to the resort town Verbier, Switzerland. Together with Duke of York, she owns a chalet for £13 million. Besides, the woman rents an apartment in Eaton Square, London, and a room in Royal Lodge, Windsor Castle.

From the moment Sarah became Duchess of York, she joined many charity funds.

In 1993, Duchess of York established Children in Crisis, the organization aimed at improvement of women’s and children’s lives in developing countries. She also became the president of the organization.

Sarah received the news from the National Institutes of Health about obesity, breast cancer, and osteoporosis research; she shared the information she had gathered with people via public lectures, interview, and television. As she raised the awareness of these diseases and their prevention, the Journal of Women's Health awarded Fergie in 1998.

When it was discovered the elder daughter, Beatrice, was dyslexic, Sarah began to support Springboard for Children, the fund that helped children overcome the difficulties in reading and writing.

In 2003, Sarah was one of the founders of the American organization fighting cancer: Great American Weigh In. Its annual campaign is aimed at spreading the information about the obesity and cancer relation. In 2006, Duchess established The Sarah Ferguson Foundation in Toronto; Fergie’s commercial activity and private donations support the international organization that assists families with children who need urgent help.

In 2010, Sarah sponsored the Mullany Fund that supports British students who would like to study medicine or physiotherapy. In 2013, Duchess of York, her ex-husband, and their daughters co-founded the business company thanks to which Indian women got the opportunity to sell their products via the British retailer company Topshop. The next year, Ferguson was appointed an ambassador for the Institute of Global Health Innovation, Imperial College in London.

Sarah Ferguson is known as a producer, actress, and TV presenter. She appeared in an episode of the popular American series Friends, became a frequent guest in Steve Wright’s radio program, and worked as a special correspondent of NBC channel. Later on, the woman organized a talk show on SkyOne and produced the historic movie The Young Victoria. Besides, Ferguson created several children’s books, nutrition guide, and autobiographical texts.

Fergie continues to do the charity work. In her recent Twitter posts, she supported children who suffered from the tsunami in Indonesia.

What is happening in the private life of Duchess of York now is unknown. Together with her ex-husband, she was present at the wedding ceremony of her daughter, Princess Eugenie, and Jack Brooksbank on October 12, 2018. 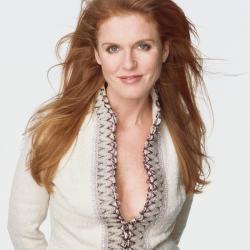