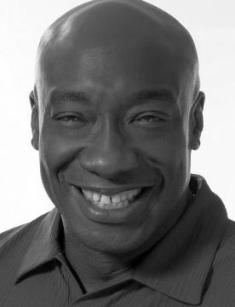 Michael Clarke Duncan is an American actor, known for the films Armageddon, The Green Mile, the TV series The Finder. He was a professional basketball player in his early years. The actor died in 2012 of heart disease.

Michael Clarke Duncan was born on December 10, 1957, in Chicago, USA. The family of the future actor was incomplete. A single mother raised Michael and his sister. The would-be actor entered Alcorn State University in Mississippi, the first black land grant institution established in the United States (now it is a regular university). For one season, Duncan played basketball for the Alcorn State Braves, but then quitted the sport.

The future actor had to drop out of the university when his mother fell ill. Michael took care of the family and began working as a bouncer at Chicago clubs. Powerfully built and very tall Michael could not but choose this profession. Later, the future actor moved to Los Angeles, where he worked as a bodyguard.

One of the first roles in Michael’s acting career was the part of Bear in the fantasy disaster film Armageddon with Bruce Willis. Duncan’s hero is a crew member of the space shuttle Independence, which flies toward an asteroid heading towards Earth. The team must drill a shaft into the asteroid and plant an atomic bomb into it to split this massive stone because the collision will produce catastrophic events.

The shuttle slingshots around the moon and faces the asteroid's debris field. The Independence crashes and almost all people on board die, only Bear and two more people survive. Ben Affleck played one of these two, A.J. Frost. The survivors are sent to meet the team of the second shuttle flying to the asteroid, who also do not do everything right.

In 1999, the mystical drama The Green Mile based on the novel by Stephen King was released, in which the actor played the role of John Coffey. Michael was cast thanks to his acquaintance with Bruce Willis, his colleague on the set of Armageddon.

Duncan's hero in The Green Mile is sentenced to death after being convicted of raping and murdering two white girls, and Coffey is placed on death row. Paul, one of the officers, doubts Coffey’s guilty.

John's behavior is not similar to how a killer and sociopath acts. Besides, Coffey demonstrates supernatural powers, curing Paul's bladder infection and bringing a pet mouse of a prisoner back to life, but the other criminal trampled it in retaliation.

The wife of the prison’s warden is also sick, and medicine cannot help her. The prison officers secretly take Coffey to the boss's house so that he can help the unfortunate woman, and he succeeds. Later, Coffey uses his abilities to show Paul the real killer of the girls. Being convinced of Coffey’s innocence, Paul tries to help him escape from prison, but Coffey refuses to do it and eventually dies.

For the role of John Coffey, Duncan was nominated for the Academy Award for Best Supporting Actor but did not win it.

He continued to collaborate with Willis in the project The Whole Nine Yards. This comedy was released a year after The Green Mile. Bruce Willis played the role of an assassin, "Jimmy The Tulip" Tudeski, and Michael Duncan portrayed Franklin "Frankie Figs" Figueroa, a gang member who works for Jimmy.

Later, the adventure film The Scorpion King was released. Michael played the role of Balthazar, the leader of the Nubian rebels, who captured protagonist Mathayus, the mercenary Akkadians (Dwayne Johnson). The characters have a short fight, after which they decide to unite against Memnon, the tyrant king.

The actor co-starred with Bruce Willis once again in the 2005 film Sin City. It is a neo-noir crime anthology film, directed by Robert Rodriguez and based on the graphic novels by Frank Miller. The film consists of separate completed parts: prologue, epilogue, and three short stories. Duncan played the role of Manute in the story The Big Fat Kill, which focused on the conflict between the prostitutes of the Old Town, the police, and the mafia.

In 2011, the superhero movie Green Lantern based on the DC comics of the same name was released. Michael Clarke Duncan voiced a character named Kilowog. He is a member of the Green Lantern Corps, a gifted technician, and a primary trainer of recruits. In the film, Kilowog and another veteran of the corps, Tomar-Re, train the protagonist, test pilot Hal Jordan. In the end, Kilowog rescues Jordan from death, when the latter falls on the Sun, having lost consciousness, after a fierce battle in outer space.

A few years before, the actor had appeared in the comedy School for Scoundrels, in which he played a man named Lesher. He is an assistant to Dr. P, the head of self-esteem courses. The title character, young loser Roger, signs up for these courses. Dr. P helps the hero get rid of the inferiority complex, but after that, he begins to ruin Roger's life and seek the attention of the young woman whom Roger likes.

One of the last projects with Duncan is the comedy-drama series The Finder. The protagonist of the series, retired Major Walter Sherman, has an extraordinary ability to find anything.

Due to a traumatic brain injury suffered in the Iraq War, the Major became eccentric, paranoid, and suspicious, which helped him to find anything. Michael Duncan plays the role of a widower and former attorney, Leo Knox, a friend of the title character.

The Finder is a spin-off of the detective series Bones, which focuses on the adventures of forensic anthropologists who help the FBI. To introduce a new character, Leo Knox appeared in the TV series Bones before the launch of The Finder. There the hero appeared in the 19th episode of the sixth season, which was also entitled The Finder.

The actor’s girlfriend, TV presenter Omarosa Manigault Newman, did not become his wife. The couple was preparing for marriage, which was scheduled in January 2013. The actor was going to acquire a family, but the heart attack hampered his plans.

Michael Duncan was dating Vanessa Bosele and Irene Marquez before. During the filming of Armageddon, Duncan met Alicia Harrison, and the young people were in a relationship for a while. Michael Duncan had no children.

On July 13, 2012, the actor’s girlfriend, Omarosa, found him unconscious in the house. Michael Duncan suffered a heart attack, and Omarosa helped him until the ambulance arrived, doing an indirect heart massage. The actor was saved, but he did not live long. Michael went to the hospital and died on September 3. The cause of death was fatal heart disease.

Michael Duncan’s funeral took place on September 10 in Los Angeles. His friends and colleagues, including Tom Hanks, came to pay their final respects to the actor. Duncan's grave is located at the Hollywood Hills Cemetery.

At the time of his death, Michael Clarke Duncan’s net worth was estimated at $18 million.