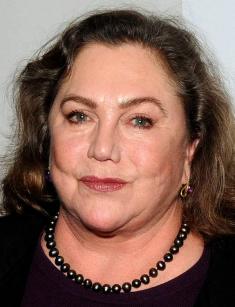 Kathleen Turner is an American stage and screen actress, best known for her roles in the adventure films Romancing the Stone and The Jewel of the Nile, as well as the musical drama Peggy Sue Got Married. She has won two Golden Globe Awards, has been nominated for an Academy Award, and became one of the most beautiful in-demand Hollywood actresses in the late 1980s and early 1990s.

Kathleen Turner was born in the city of Springfield, Missouri, on June 19, 1954. Father Allen Richard Turner was a U.S. Foreign Service officer who often worked and lived abroad with his wife Patsy and four children.

Kathleen grew up in England, where she graduated from the school in 1972. The girl was raised in a strict conservative Christian household, so her interest in performing and participation in school productions was discouraged by both of her parents.

After the death of her father, Patsy and her children moved to the United States. 19-year-old Kathleen entered Missouri State University in Springfield, combining her studies with volunteer work at a Planned Parenthood office.

A desk job did not attract the girl, and in 1975 she went to Baltimore, where she began to study theater at the University of Maryland. Two years later, Kathleen received a Bachelor of Fine Arts degree and made her debut in several productions directed by Steve Yeager.

In 1977, Turner moved to New York City and began to perform at a theater. She first played in the Soho Repertory Theatre, then got a job on Broadway.

The actress did not lack the job offers because the directors saw Turner as femme fatale and offered her the appropriate scripts. However, the actress steered away from such a character to "prevent typecasting." So, she chose Carl Reiner’s comedy The Man with Two Brains, having received a large number of proposals.

Kathleen returned to the role of the beautiful romantic lady in the 1984 adventure film Romancing the Stone. The film became a world hit, was nominated for an Academy Award and won two Golden Globe Awards, including for Best Actress.

In 1985, the actors of Romancing the Stone teamed again to shoot the continuation of the bestseller. Kathleen refused to commit to the original script of The Jewel of the Nile, and producer Michael Douglas agreed to rewrite the story to make the leading actress play. However, the film was not a resounding success in comparison with the first part of the adventure story.

The popularity of the actress increased after receiving a second Golden Globe Award for the movie Prizzi's Honor, where she was lucky to work alongside unsurpassed Jack Nicholson. The height of Turner’s career was the musical film Peggy Sue Got Married directed by Francis Ford Coppola, for which she received the award for Best Actress from the U.S. National Board of Review of Motion Pictures as well as an Academy Award nomination.

In the late 1980s, the actress was the speaking voice of Jessica Rabbit in the full-length cartoon Who Framed Roger Rabbit, after which she distributed hundreds of autographed photos of the animated character.

In 1989, Kathleen teamed with Michael Douglas and Danny DeVito in the black comedy The War of the Roses. Turner had to wear a sports swimsuit and train a lot to play the role of the former gymnast Barbara Rose. As a result, the actress performed all the acrobatic elements without the help of stuntmen.

In the early 1990s, rheumatoid arthritis seriously restricted Kathleen's activities. She had to turn down several leading roles and eventually stopped appearing on film sets. The disease and alcohol abuse significantly altered her looks.

In 2002, Kathleen's addiction became so severe that she had to undergo medical treatment and subsequent rehabilitation at a hospital in Waverly, Pennsylvania. Turner said in an interview that she was no longer young, and blamed age for all the problems.

During this period, the actress voiced cartoon characters and played bit parts in low-budget films. One of the few prominent works was the role of Chandler Bing's father in the television series Friends.

In 2006, the disease that tormented Kathleen for eight years abated thanks to new methods of treatment. The actress restarted her acting career and starred in the films Monster House and Nip/Tuck, as well as in the episode of the crime project Law & Order. In a while, Kathleen’s filmography included the movies The Perfect Family and Dumb and Dumber To.

One of her latest works is the role in the thriller series The Path, which final season was released in 2018. The lack of lead roles made Turner restart her stage career. She won the Tony Award for Best Actress twice for Broadway performances.

In 1984, Kathleen Turner became the wife of millionaire Jay Weiss, the son of the owner of the famous brand, Donna Karan. Three years after the wedding, the couple had a daughter, Rachel Ann, who was brought up in Judaism at the insistence of the actress's husband.

The happy family life came to an end when Kathleen faced arthritis. In 2006, the couple declared a break in the relationship, and a year later they divorced.

Nowadays, Kathleen lives in New York City and works as a lecturer. The actress combines performances on the theatre stage with work on the series Heartstrings about the life of country singer Dolly Parton, which is scheduled to premiere in 2019.

There is no information about Turner's personal life. The actress does not have a blog or accounts on social networks.